Abbey Serge is a muggle-born witch in her fourth year at Hogwarts School of Witchcraft and wizardry. She is in Ravenclaw house.

She was born to two muggles. SHe was not rich but not poor eithe. She was happy and always got great notes. Her parents were happy that she was a witch and said that they were going to miss her a lot.

She meet her soon-to-be best friend, Connor, and nothing more happened that year.

She began to have crushes in boy and started with a Slytherin who was very kind with her. Connor sometimes told her that she was crazy because of her crush and had a kind of a restrain on there friendship. In the end their relationship. 3th Year Her father decided that she should go to Beauxbatons because of the war and she did. Her father got some false papers that said she was pure-blood. In the end Durmstrang came to school where she meet her crush. The day before this mysterious guy left, they shared a kiss which left Abbey confused about her and him.

She is a very quiet girl. Tries to not get into fights but if needed she can be a powerful witch. Sometimes people say that she is nobody, but wait, just wait. She sometimes can be seen as cunning as well. 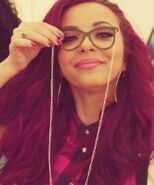 Add a photo to this gallery
Retrieved from "https://dumbledoresarmyroleplay.fandom.com/wiki/Abbey_Katherin_Serge?oldid=395027"
Community content is available under CC-BY-SA unless otherwise noted.