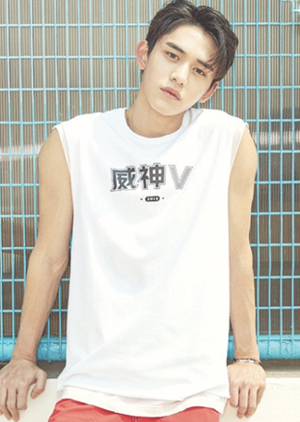 Adonis Liu is the type to act first, think later, then be annoyed when he has to pay the consequences for what he did. Having been like that his entire life especially when it came to not a second of hesitation defending his siblings at school, Adonis is comfortable being the bodyguard for his friends and family in a sense. When it comes to actual life choices, while the act first think later tactic is still applied in his day to day life, he does tend to think a lot more before he does anything. Having a the temper he does certainly doesn't help though, and often times he gets carried away with his anger.

Although he never actually met his mother, considering he only knew her for about a week or two before being left with his dad, Adonis certainly didn't get off from it scot free. While he loves his dad and step-mom, it left Adonis wondering why his biological mom didn't want him and while he is generally a very confident guy, that's where it falters greatly. He tries not to let it get to him but the days where he's overly protective of his siblings and extra clingy are tell tale signs that he's thinking about why she left him. Luckily, Adonis has developed multiple coping mechanisms to handle it, some healthy and some not-so healthy.

With little siblings that idolize him and appreciate everything he does for them, it is hard for Adonis not to show signs of weakness when it comes to thinking about his mom and how she could so easily leave him. The times when it gets the best of him most notably is usually when he gets into physical altercations with someone. This is his main way of not taking it out on the wrong people, and unfortunately that means strangers get the brunt of his anger and emotions. Aside from fighting/lashing out and being overly clingy and protective, a coping mechanism he's not necessarily proud of is his tendency to go through multiple significant others or hookups within a matter of weeks. He isn't overly proud of being labelled a flirt or a f**k boy, and it's something he tries to hide the best he can but unfortunately sometimes it gets the best of him.

All is not lost for Adonis though, he may be a boiling pot of overthinking and emotions a fair portion of the time but that doesn't wholly make up his personality. Typically when not bombarded with panic attacks or overthinking, Adonis can be found hanging out with friends or playing video games. When one is to look at Adonis' physic they may consider him to be a gym rat, and while he does enjoy working out here and there, he truthfully doesn't put much work into his body and is actually a bit lazy when it comes to physical activity as well. Generally speaking Adonis is a very laid back and care free person, of course until provoked. He's quite funny as well, or at least he likes to think he is.

Adonis Liu, first known as Liu Lin, was born out of wedlock to Chinese pure-blood father Wyatt Liu and Thai half-blood mother Sienna Watakeekul. The couple having met during their days at Mahoutokoro, decided to move to England together to start a new life. This proved disastrous for the couple as soon after their move, Sienna had gotten pregnant and the reaction she gave Wyatt over it wasn't a good one. The pregnancy drove the couple apart, and pretty soon Sienna went back to Thailand with Wyatt's unborn child.

Losing Sienna was a lot for Wyatt to handle, not only did his school love leave with their unborn child but now Wyatt was alone in England with a house to pay for that was meant to be split between him and his former girlfriend. The split left Wyatt needing a roommate in order to pay the bills, lucky enough for him he found one within a couple months. A woman by the name of Harriette Chen had stepped into the position rather naturally. While the pair had never met before, Wyatt and Harriette just seemed to click. As Harriette moved in, it wasn't long until a romantic relationship started brewing between the two, with Harriette helping Wyatt get over Sienna and his son.

Despite growing up with such a small age gap between him and his younger siblings, Adonis was the protective older brother his parents had hoped for. Having been born so late in the year he was in the same year group as Aphrodite and Apollo, the three were known to get rowdy in class. And if anyone picked on either of them Adonis was quick to get into a fist fight for them. A bit of a bruiser of a child, Adonis was quick to defend himself or his siblings and not really think about the consequences, which often resulted in him getting in trouble a lot.

As he neared the age of nine, Adonis was getting in yet another fight to stop someone from picking on Apollo. It was this instance that his first signs of being a wizard kicked in and as Adonis went to go push the kid to the ground after he himself had been punched in the face. The mixed adrenaline with the anger Adonis had fuelled itself into his magic and before even laying a hand on the kid to push him, a force of magic surged through him and knocked the kid into lockers in the hallway. Whispers quickly started before Adonis even knew what had happened, after grabbing his backpack he and Apollo quickly ran from the hallway and hid in the bathroom. While Apollo dabbed away at his brother's split lip, he asked if Adonis knew what happened. Being the older of the two Adonis didn't want his brother to worry. Sure their parents were both wizards, but they were never really told about how magic started or things of the sort.

Adonis was initially scared to tell either Wyatt or Harriette, but when the school called to tell them Adonis was suspended for three days due to what happened, the conversation was brought to him. While he was obviously in trouble for what he did, his parents did explain that it was only partially his fault and that his magic was just bubbling to the surface and that he shouldn't worry. It was at that point that Adonis somewhat pulled back in his muggle studies and learned more and more about the wizarding world. Not long after him Aphrodite and Apollo followed soon by having their magic kick in and by the time Adonis was twelve and the twins were eleven, it was time for all three to start their first year at Hogwarts after earning an acceptance letter each.

Retrieved from "https://dumbledoresarmyroleplay.fandom.com/wiki/Adonis_Liu?oldid=1075822"
Community content is available under CC-BY-SA unless otherwise noted.