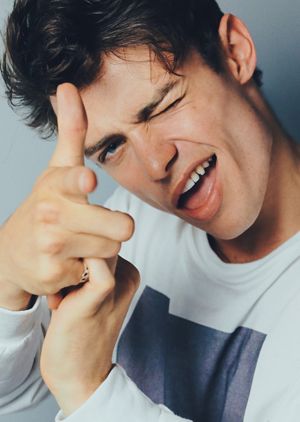 A natural born caregiver who took after watching his mother take care of his grandmother his whole life, Aksel has been known to always put the needs of others before his own. He is a very naturing person who doesn't like to see anyone fail, and for that reason he will always go out of his way to help those he can in whatever task he can. He'll do this so often that at times he often neglects his own needs and pushes them aside to focus on others. With that being said, it doesn't cause many issues in Aksel's life as he's very sure of who he is and is very capable of catching up on his own needs. He's also incredibly modest and despite going above and beyond for everyone he knows, he tends to downplay it a considerable amount.

However, Aksel doesn't always like to be inside taking care of family or helping out his friends. Truth be told he is quite the adventurer and he's always up for a challenge. Whether it be physically or mentally, Aksel is up for anything and through a combination of using his brains and his strength, for the most part he can solve any challenge standing in his way.

Aksel quite enjoys partaking in various sports, and at times he lets his caring nature slip away and he becomes incredibly competitive and rough, but that depends on the level of the sport he's playing. If it's a game amongst friends, he tends to take things easy and wont mind letting them win over him. However, if it is an official sports match there is no way he'll go easy on you and he'll plow through any competition he has to. Due to his physical stature, at times he forgets that not everyone is as built as he is and when he starts getting rough he neglects to keep in mind he could potentially hurt someone. It's almost like he shuts down any and all emotional tethers to reality and just becomes a bull ready to charge. Going to multiple muggle psychologists, many account it to him ignoring his own feelings and site it to a form of releasing steam.

The Lorenzen family was as normal as a muggle couple could get. Both born and raised in Copenhagen, Adolf and Elise were a simple couple; Adolf worked a nine to five job wile Elise stayed at home and served as a caretaker to Adolf's aging mother, Agathe. In their late twenties, the pair had no time to think about starting a family of their own. What with Adolf working the vast majority of the day and Elise spending all her time taking care of Agathe, the idea of kids simply wasn't in the realm of possibilities for the two of them. The two barely had time to themselves.

Six years of the pair dating had passed before deciding to get married, and it wasn't long until Elise was surprised with a pregnancy that neither herself or Adolf saw coming. Agathe was simply overjoyed at the news, she had been hoping for the day that she would get to see her own son have a child of his own. As she had also come to know and love Elise as a daughter of her own, she was even more joyed that her son would be starting a family with her. Following what was a rather simple and easy going pregnancy, Elise gave birth to a baby boy a month before the said due date.

Despite being born rather early, the baby boy who was given the name Aksel had no more issues regarding health than basically every other baby. From the very beginning Aksel was a quiet baby, barely ever crying in the middle of the night and never starting a fuss. While he eventually would grow out of this and become a tad bit vocal whenever he wanted things, for the most part he was always a very good baby.

Growing up, Aksel was always very gentle and caring towards those he cherished. His grandmother especially was someone that Aksel would go out of his way to do just about anything for. Prior to attending muggle schooling, Aksel could always be seen either helping his mother tend to Agathe or sitting by her side while she was watching television or telling him a story. Young Aksel simply adored his grandmother and wanted to spend as much time with her as humanly possible. When school had become an obstacle in the amount of time Aksel could spend with Agathe, while he was saddened by it, it just made Aksel want to spend more time with her whenever he came home.

Aksel was seven years old when his beloved grandmother's health took an unfortunate decline, and it was at this time when he began helping Elise in caring for Agathe. As opposed to just spending quality time with her, he know would help Elise in the more important tasks. Thankful for the added help, Elise was always so grateful to her son and his caring nature, something he got from his mother. Roughly a year or so after Agathe's health took a decline, with the help of Aksel and Elise, things began looking up for the family when she started getting better.

Around the same time as Agathe's health taking a turn for the better, Aksel experienced his magic for the first time. Elise had been busy preparing lunch for Aksel while he was entertaining his grandmother. Busy explaining his day to Agathe, Aksel hadn't noticed that behind him a notepad began floating. Agathe watched in awe as Aksel continued on with the conversation. Eventually, Aksel caught on that there was something odd in the situation and looked behind him. Seeing the floating notepad, Aksel let out a scream and he was eventually comforted and calmed down by Agathe. When Elise came in to see what was wrong, Agathe shewed her away and when alone with Aksel, explained what had happened.

Unbeknownst to everyone else in the family, grandmother Agathe was a squib who chose to keep it a secret. Having been exiled by her pure-blood family, she knew all too well about the magical world as well as its harshness. While she feared one of her ancestors would one day become a wizard due to her genes, she never wanted it to be Aksel. Nonetheless, Agathe knew what was needed to be done and thus she talked to Elise before speaking to Aksel about it.

From that moment onwards, Aksel's life took quite the turn. Instead of being the one to entertain his grandmother with stories about his day, Agathe was the one to tell stories about the wizarding world. Her stories varied between her own experiences, to things that Aksel would one day encounter. While being a squib, Agathe did her best to guide her grandson towards the path of a wizard. Despite her hesitance, Aksel seemed quite enthused by the idea of being a wizard and couldn't wait to one day attend the lustrous Hogwarts that Agathe told him so much about.

Retrieved from "https://dumbledoresarmyroleplay.fandom.com/wiki/Aksel_Lorenzen?oldid=1040391"
Community content is available under CC-BY-SA unless otherwise noted.