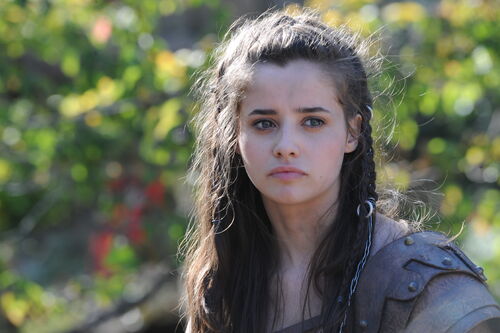 (This Character Belongs to Fandomgirlforever)

Alexandrite doesn't talk about her past. It's a simple fact that she's always stuck to. If anyone asks she tells them the basics. Her parents couldn't afford to keep her, so she was taken into care. When she was eight she was adopted by the Romano's who have been her family ever since. Except that's not the entire story. James and Heather Romano were a struggling young couple who really did not have the means to support themselves let alone a child. And with neither speaking to their family's they put their only child up for adoption. Alexandrite was put into foster care. The first few places were good. Not that she remembers them much. But the family she was placed with when she was six, that was a complete different story.

The Moretti family she was placed in already had three other foster children when she arrived. Lucas was four, Noah five and Ethan sixteen. The parents made it clear from the start they were not there to love the children, merely collect the money they were given for 'caring' for the kids. Within hours of her being there, it became obvious to the six year old that whilst Angela Moretti was terrifying, Edward Moretti was a tyrant. Despite not knowing her, Ethan did whatever he could to keep Alexandrite, Noah and Lucas safe. Even if that meant hiding them in a damp cupboard for hours on end until Mr.Moretti had calmed down or passed out drunk.

But Ethan couldn't be home all the time, sometimes he was working in an attempt to save up to get himself out of there the moment he turned eighteen and sometimes it was because Mr. Moretti locked the door to prevent him from coming home. But even with him gone it didn't mean Mr. Moretti was any calmer. In fact, sometimes it put him in a worse mood. And so it fell to Alexandrite as the next oldest to protect the youngest. Not that she ever let Ethan know what she did for the other two when he wasn't able to be home.

For the next two years Alexandrite lived with the Moretti's. As it got closer and closer to the day Ethan would have to leave she became more and more terrified. It was during a day where Mr. Moretti was in a particularly nasty mood. She was hiding in the cupboard with Lucas and Noah, One minute the shouting and screaming around them was the only thing they could hear, the next there was complete silence. Although she didn't realise it at the time, it was her first sign of magic. She just chose to believe the shouting had stopped.

It was the week of Ethan's 18th birthday when the incident happened. Ethan was working, as he had been for the past three nights. Mr. Moretti was in a worse mood than normal, he'd knocked Alexandrite back, it wouldn't have hurt her, had it not been for the fact her left arm landed into the open fire place, with the fire still blazing. If it hadn't been for the fact Ethan had come home early, the Moretti's probably wouldn't have done anything. Ethan however, managed to walk in just as she yanked her arm out of the flame. He rushed her to the hospital and it was there that everything about the Moretti's came out.

Alexandrite spend nearly two weeks in the hospital being treated for her burns. And as it turned out, it took the social workers two weeks to finally find her birth family. It was there, at the muggle hospital that Alexandrite met Marlee and Thomas Romano. Thomas instantly recognised his younger sister in the eight year old. A simple blood test confirmed that Thomas was in fact her uncle. And so, when she was finally released from the hospital she was released into the care of Thomas and Marlee.

She struggled adapting to her knew life. Where she would want for nothing and everything was provided for her. Marlee and Thomas both worked in the Italian ministry and it was through them that she found herself making friends, mainly with the children of Marlee and Thomas' friends. But even with their continued reassurance she didn't feel like she belonged. And so at age 11 she found herself disappearing off to Beauxbatons. Which really wasn't the place for her. She wasn't preppy enough for it. And the moment the fact she had nightmare's got around she certainly didn't find making friends easy.

Just before her third year Alexandrite received the best new possible Marlee and Thomas were being transferred to Britain. Which meant she was being transferred from Beauxbatons to Hogwarts. And honestly? She couldn't be happier.

Alex drifts through life with absolutely no instincts for self preservation. She's recklessly brave, She will always put someone else before herself even if that meant sacrificing her life for theirs. Provide people with the help they need instead of helping herself, because she feels like she doesn't deserve the help she gives others. Plus, solving other people's problems was a hell of a lot less difficult that dealing with her own. She believes that nothing is permanent, not life, not family, not friends. She believes that forever doesn't exist. At least not in a positive light. And no matter how many times someone promises forever, she just can't believe them. Good memories are fleeting, the bad ones however stick with you forever. And she has a lot of bad memories. She suffers from regular nightmares which end in her either screaming herself awake or her just refusing to sleep at night. Which (obviously) is a bit problematic. Her belief's are part of the reason she doesn't apply herself. She believes she has no chances in life, so why should she bother trying? She's a bright student, but she just doesn't care to try. It scares her that maybe, just maybe she does stand a chance at doing something with her life. As much as it scares her that she could be stuck living in her past her whole life, it scares her just as much if not more to think of her future.

Retrieved from "https://dumbledoresarmyroleplay.fandom.com/wiki/Alexandrite_Romano?oldid=1075824"
Community content is available under CC-BY-SA unless otherwise noted.