Giovanni De Luca was born to do great things in his life time, especially giving the notoriety of his family in Italy. His mother was a second generation Indian born in Italy, while his father was born and raised in Italy by Italian parents. Having come from money already, Giovanni's father built a sturdy empire for their family in Italy through real estate and the stock market. Though some would say his motives were a bit on the darker side of things, wanting power rather than success and happiness, nobody could deny that the De Luca empire was huge.

A few years after finishing wizarding school at Beauxbatons, Giovanni expressed wanting to have a role in the family business. Hesitant at first but always wanting to expand the De Luca's empire and power in the wizarding world, Giovanni's father agreed and soon Giovanni became the CEO of a branch in the Venezuelan part of the wizarding world. As the CEO, Giovanni made it his mission to go above and beyond what his father used to do in Italy. Giovanni bought shares in large scale cities and very soon the Venezuelan branch of the De Luca family business was equally as notorious as it's Italian counterpart.

Around the age of twenty-five was when Giovanni met his future wife, the beautiful Valentina Acosta, a pure-blood witch from Castelobruxo. Although it wasn't the most organic way of forming a relationship, the pair were actually set up by their parents. Valentina was a year younger than Giovanni but equally as wealthy from her family's riches. An heiress in her own right, the couple's wedding was sure to cause gossip in the wizarding community as it signified the unity of two very rich families. It was at the age of twenty-seven that Giovanni tied the knot with Valentina, becoming Mr. and Mrs. De Luca.

The night of their wedding was when their first child was conceived, and soon their first son Santiago was born. After Santiago was born, a new child was welcomed into the family every other year. Next was Nicolás, followed by Salvador, then Ignacio, Tomás, and finally Allegra, the only daughter out of the five children. From very early on, Giovanni tried molding his children into ideal young heirs and heiresses. Much to Valentina's dismay, he taught them about the family business while simultaneously protecting them from all the dark sided acts happening behind the scenes. Valentina on the other hand tried keeping her children as safe as possible, knowing Giovanni was a tough father and that a lot of people were unhappy with how he was building his family name.

On a hot day in August, Allegra came into the world. The only girl in a line with many boys provided her with extensive pampering, and she was given everything she ever asked for, from the time she could vocalize her wants. Allie learned quickly from her father the art of getting what she wanted using coy words, and a quick tongue; her natural beauty only emphasizes her persuasive tactics with the appropriate bat of an eyelash, or hair twirl. She grew up pitting all her brothers against each other, playing favorites where it suited her. The move from Venezuela was rough-- she'd grown up expecting to go to Castelobruxo. Still, the opportunity to build up her own name at a new school, where all of her siblings would be new, was nice. She wouldn't go in with any prior reputation-- she could build the one she wanted. And Allegra likes that idea very much.

Allie is the epitome of a spoiled rotten youngest sister. She's got five older brothers and, since she's the only girl, she's grew up pampered, entitled, and manipulative. The word no is only in Allie's vocabulary, because she gets to tell others no; no one says no to her, and it's been that way from the get-go. If her parents and siblings gave her whatever she wanted-- why would the real world be any different? She's beautiful, likable, and an amazing person-- what on earth is there to say no to?

Growing up with a successful businessman for a father taught Allie the way of smooth talking, and getting what you want by manipulating others. And who better to practice on, than her older brothers? She knows how to stroke egos to just the right degree before twisting the situation to suit her needs-- something she did frequently with her brothers. It goes without saying that she has them wrapped around her little finger; she's aware of it, and she likes it that way.

Allie's pretty ignorant. While she knows what the world of business can entail... there is much about the world that she's been sheltered from, by her parents and her brothers. She hasn't faced any real hardship in her life. She's been taught that she's too pretty, too rich, and too fortunate for anything truly terrible to befall her. Betrayal isn't something she's used to, at least not seriously (siblings fight, and they make up... the world moves on). People with less-fortunate circumstances aren't something she's ever been exposed to. Bullies certainly aren't something that she's had to face in her life. She's lived a very blissfully ignorant life... and who knows when that will change? 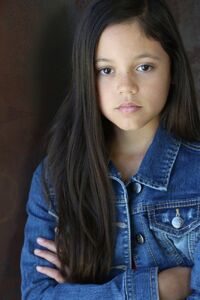 Allegra likes to flaunt her riches in her appearance. She frequently does her hair up nice, and she always wears expensive clothes under her robes. She keeps expensive accessories at the forefront of her outfits. Her dark hair nearly always looks perfect, and she frequently uses makeup to accentuate her dark eyes. She's got an average build for a girl her age. Her face claim is Jenna Ortega.

*Her MBTI is ESTP.
Retrieved from "https://dumbledoresarmyroleplay.fandom.com/wiki/Allegra_de_Luca?oldid=957217"
Community content is available under CC-BY-SA unless otherwise noted.