This Character Belongs To Jaye

Amizo: is one of the seventeen names of Lilith.

Zebunonovich: is a Russian Patronymic name meaning Son of Zebunon

Willow: is the name of a tree which is derived from the Middle English wilwe (willow)

His childhood was normal for a pure-blooded wizard with multiple siblings, and his family was a rich one. Her brother Izorpo was sorted into Slytherin, and in his fifth year met a Durmstrang transfer who called himself Lucian Willow. Before that, he hadn't thought that he could have cousins, not even knowing that his father had had a brother.

Amizo has what seems to now be generally regarded as 'the Willow look'. Dark hair, a pale complexion, and blue eyes, much like most of his siblings, including Izorpo, Satrina, Abito, Mstislav, Kea and Sergey.

Amizo is, like his siblings, naturally loud, coming from a naturally loud household. Beside this, he's pretty smart and usually disregards feelings, unless it's his family. Most seem to believe that he has anger problems when he doesn't. He at least attempts to be polite at all times, but often fails miserably. 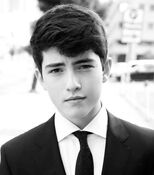 KibethAstarael
Retrieved from "https://dumbledoresarmyroleplay.fandom.com/wiki/Amizo_Willow?oldid=1075661"
Community content is available under CC-BY-SA unless otherwise noted.