This character has been requested to be preserved by Yugimuto1.

Anastasia Giry is role-played by Yugi.

Anastasia Marguerite J. Giry was a Slytherin attending Hogwarts School of Witchcraft and Wizardry, she was also a Slytherin Prefect. She now works in the Ministry of Magic in the Department of Magical Accidents and Catastrophes.

Asia is naturally beautiful. She is very pretty indeed, which is why most boys seem to fall for her. She has curly strawberry blonde hair which is normally in a bun, and has dazzling light blue eyes. She has a slim figure, being a ballerina. She has tan skin. She loves the colors pink and purple, so she normally wears accessories of those colors. She is also quite petite, so normally she has to look up at people when talking to them. Just because she's small, one shouldn't underestimate her though.

She was happy, her family was happy. They did not discriminate against non-purebloods, they did not judge people on their blood purity, they accepted everyone. They were liked by all. That all changed. All because of one gunshot.

It was her sister who lost her life during the summer after second year, the one before third. Vanessa Giry was going around on a normal day, and she was unfortunate to witness a murder before her eyes. Immediately upon noticing there was a random bystander watching, the mysterious man pulled the trigger of his gun, aiming at Vanessa, before she could even utter a single spell to protect herself. They did not hear from Vanessa in two days. The third, the police called saying they found a body in an alley. Identification from a wallet identified her as Vanessa Delilah B. Giry.

The death changed Asia for the worse. Her family coped, yes, but she never recovered. Her personality changed drastically. Ever since, she's identified muggles as cruel and wrong. What they do are cruel and wrong. And that she was to never associate with one ever again.

Since she has left Hogwarts, she has got a job in the Ministry in the Department of Magical Accidents and Catastrophes.

She is quite spoiled because ever since her sister died, she has been given whatever she wanted. Asia prefers getting her way and what she wants. Her personality is no where near as beautiful as her appearance is. She's very nice to pure-bloods, as she discriminates according to blood purity, which is why she makes sure to know one's blood status before becoming friends with them. She could be the complete opposite to those who aren't, she'd probably jinx them even, and never speak to them again. Also, she has a passion for ballet and has been doing it since she was very young, and is now doing it competitively. Sometimes, mostly boys, overlook her personality and being quite enamored with her looks. She wouldn't dare display her rotten personality in front of a teacher, not wanting to get in trouble, which is pretty easy. It would be simple to just blame the trouble on another person.

She loves the subject of Transfiguration. She does not excel at it, though listens attentively in class and reads about it a lot, and tries to do her best in this subject. This is unusual as she is almost never enthusiastic about classes.

Asia's wand is 11 inches, Dragon Heartstring, Hawthorn. Hawthorn ‘makes a strange, contradictory wand, as full of paradoxes as the tree that gave it birth, whose leaves and blossoms heal, and yet whose cut branches smell of death.’ They are complex and intriguing in their natures, just like the owners who best suit them. Hawthorn wands may be particularly suited to healing magic, but they are also adept at curses, and it has been generally observed that the hawthorn wand seems most at home with a conflicted nature, or with a witch or wizard passing through a period of turmoil. Source: Harry Potter Wiki

Vanessa's old watch was passed onto Asia when she died. It is unknown what the significance is, but still, it is very important to her. It is already broken, and cannot tell time anymore. Yet, Asia wears it everyday. If one were to question the watch, either Asia would trust them enough to tell, or a hex will be coming their way. The watch's time is forever stuck on 10:10. Recently Asia has found one of her old grandfather's old Muggle Watches he got while he was adventuring in Switzerland, a very cold place in winter. The watch looked modern.

A painting of ballet shoes, which she hangs in her room

Asia's model is Claudia Lee. You might want to click on some of the pictures to see them move. 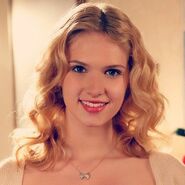 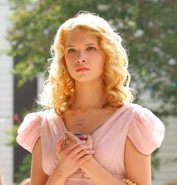 Retrieved from "https://dumbledoresarmyroleplay.fandom.com/wiki/Anastasia_Giry?oldid=1073852"
Community content is available under CC-BY-SA unless otherwise noted.