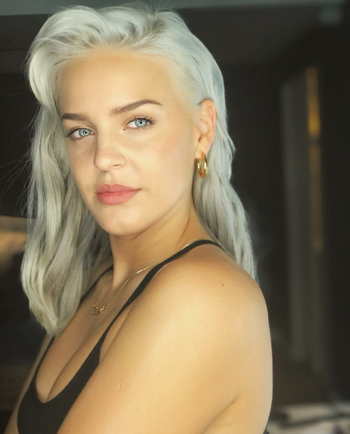 Ann-Sofie is complicated, in a weird way. On the rare occasion, she's a multi-faced person who can go from an innocent sweetheart to a jealous b*tch within a matter of five or so minutes. It's not so much that this happens often; it's more so that she's a lot more emotionally sensitive to everything that happens around her that she's sort of like a light switch - you either turn her on or off. And considering everything she's been through... it's far easier to turn her off than on. absolutely not in an inappropriate way, btw If you ask her, she'd blame the lack of a family in her life for it all.

Despite not fitting the definition of an urchin, Ann-Sofie occasionally is one. On the odd occasion, she'll walk around Hogsmeade or whatever, and intentionally bump into some random unsuspecting stranger and nick something small of little value, like small loose change or whatever. She's not the one to look for big steals; for her, the smaller, the better. It's a case of 'do unto others as you'd want done to you'; she wouldn't mind a small, valueless thing to go missing, because it probably has little importance. Hence why she only takes the little things in life. What happens with them is without question; she collects it. It piles up. Win-win, in all honesty.

While not the most social butterfly out there, Ann-Sofie can be vocal about problems if she must. She knows the meaning of 'speak up', and she'd be more than happy to speak up for anyone, including herself, which is often the case. She's admittedly more vocal of her own issues than of those of others, but it does take time to get her to open up enough. That's all to blame on how trusting she is. "Trust goes both ways." sums up her belief on how trust works.

It was a lonesome night in a wizarding hospital in Gothenburg, Sweden. At least that is all Ann-Sofie Kristina Deb would know about her time of birth. She never knew her parents, not even the slightest of a word about them. The short of it is, Ann-Sofie was abandoned by her parents. Why, she'd never come to know. But she'd hate it all the more.

An orphan since the day she was born, Ann-Sofie never really had it easy. The orphanage was really the worst of her problems; she simply didn't enjoy being in one. Of course, young Ann-Sofie wouldn't have to deal much with it; she was adopted at a very young age by a very unsuspecting Muggle couple. Unsuspecting, because they didn't know of Ann-Sofie's magical heritage at the time.

On the contrary though, Ann-Sofie loved her family to the ends of the earth. They were a nice British couple, admittedly on a vacation of sorts in Sweden. It was a bit rough at first; little Ann-Sofie had only been starting to learn the basics of Swedish, that a sudden switch to English might throw her little mind off. In the end, her family had settled for them all to learn Swedish, just cause. She'd end up learning English later in life.

Of course, in time, her family moved back to Britain, as was natural of them. Of course, things only got stranger from there... At the age of seven, Ann-Sofie's magic manifested. Thankfully, no one had been around to witness it, but it would have been worse, had it happened. Unfortunately, the manifestation drew attention that Ann-Sofie would despise for the years to come; that of the Ministry of Magic. The explanation of Ann-Sofie being magical had more or less scared her adoptive parents, as much as they showed little of it. They pretended it didn't happen, but internally, they no longer wanted Ann-Sofie.

She'd figure it out not too long after, when during Christmas one year, she woke up in a place that she'd hoped not to see again; an orphanage. Why she was there felt beyond her, but she was told that she was left here last night with little explanation. Ann-Sofie was more than just upset; she felt forever betrayed. In time, she was hopped off to Lil Bundles, a magical orphanage, which was far better for her, considering her heritage. Give or take two years later, and she received a Hogwarts letter.

She'd come to be thankful for Hogwarts, because it meant she'd no longer have to watch the orphanage ceiling much longer. She was sorted into Hufflepuff when she began, and she didn't quite mind it at first, but she wouldn't have said no to another house. Now she's into her third year, and she's still waiting for a moment that she'd have loved for sure; adoption.

And that faithful moment came. Ann-Sofie soon enough was adopted by Seraphina and Michael Whiteford, and on her first day home... she found a new family to come home to. Now the eldest of five, Ann-Sofie is more thankful that she has a family once again... but she's uncertain just how long it will last. But she will make the most of being with her new family, as she's never felt such a happiness as she now does.

Retrieved from "https://dumbledoresarmyroleplay.fandom.com/wiki/Ann-Sofie_Deb?oldid=1040783"
Community content is available under CC-BY-SA unless otherwise noted.