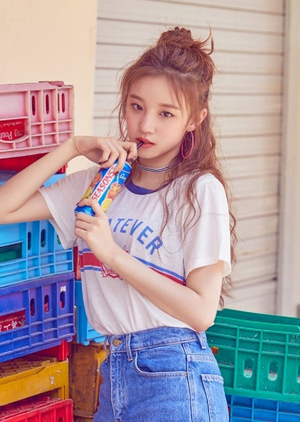 The most notable and prominent thing about Aphrodite is how charismatic she is. This, paired with her bright and bubbly personality and general friendliness, makes her a rather pleasant person to be around. She has been known to put the needs of other's before herself and doesn't hesitate to help those when she can - if she can help in any way, she will. As a result of this, many would refer to her as charming and, though she's rumoured to have been the apple of many peoples' eyes during Valentine's Day, she remains humble. Alongside this, Aphrodite is also well suited academically. Whilst she may not be at the top of her class, she isn't at the bottom either and gets grades that are just shy of being at the true top of the middling pack. Whilst it is something she's trying to improve on, she's happy where her grades are now and is fine with them remaining where they are. Though she has been regarded as 'too nice' to do so successfully, Aphrodite can be incredibly sarcastic with a sharp tongue and, if she wasn't as nice as she was, her words could be interpreted as having venom to them. She has been known, however, to struggle with the delivery of her sarcasm; stumbling over her words and resulting in it being less powerful. Aphrodite has a large interest in preserving things; she wants to preserve the muggle culture and it's influences in wizarding society, magical animals and old forms of doing things with magic that could be dying out. Such an interest has led her to having the oddity about here where she can brew potions how they may have done so some three-hundred years ago. Alongside this, Aphrodite is also a large advocate for progression within the wizarding society, believing that creatures like Werewolves and Vampires as well as Squibs deserve a home within magical society. Finally, much like her brother Apollo, Aphrodite is known to be rather clumsy and she often laughs the loudest at her failures and ineptness with some tasks.

In comparison to a lot of people, Aphrodite deals with her negative emotions extremely well. As someone who, no matter how nice she is, likes to be upfront and direct with people, more often than not Aphrodite will approach someone and want to talk it out. Respectable as always, she'll at least consider their side before pressing on. This comes from her childhood whereby she learned that not everyone had their motives align with their actions and thus she strives to figure everything out before pressing on. Aphrodite does, however, have a problem when it comes to anger. From having to defend her twin for so many years when she was younger, a small anger problem has manifested within her. Whilst it is largely just her not knowing how to deal with it, causing her to lash out in rare bursts of her words actually having some venom behind them, it still annoys her enough that she constantly tries to control it. The only other noticeable negative emotion - as Aphrodite fails to ever feel shy or nervous thanks to an outward but also inward charm - is sadness. Whenever sad, Aphrodite closes up and refuses to speak to anyone save for Adonis and Apollo. She, and many others, would describe her as sulking whenever she's sad, moping about until she feels better again. The time it takes for her to go back to her chipper self varies but, as a rule of thumb, two days has been the absolute maximum.

Wyatt Liu had a rocky past when it involved females he was romantically involved in. His first long time girl friend, Sienna Watakeekul, ran off with their unborn child. Losing Sienna was a lot for Wyatt to handle, not only did his school love leave with their unborn child but now Wyatt was alone in England with a house to pay for that was meant to be split between him and his former girlfriend. The split left Wyatt needing a roommate in order to pay the bills, lucky enough for him he found one within a couple months. A woman by the name of Harriette Chen had stepped into the position rather naturally. While the pair had never met before, Wyatt and Harriette just seemed to click. As Harriette moved in, it wasn't long until a romantic relationship started brewing between the two, with Harriette helping Wyatt get over Sienna and his son.

The three children really completed the family and, not long after, distinct personalities began to form. Aphrodite easily became the bright, energetic and bubbly young girl. Always armed with a smile and an innocent curiosity, it was easy for her to sway the hearts of her parents and pretty much anyone older than her in the vicinity. Nothing seemed to damper her spirits and she spent much of her time brightening the moods of her brothers, especially Apollo. Muggle school seemed to change that just a little bit. Whilst Aphrodite never had anything to warrant being picked on, she was usually associated with Apollo rather than Adonis; the latter of whom got a pass from being bullied whilst the former, her twin brother, got picked on a lot. She never paid any mind to it - largely because she was popular within the class enough to be told they didn't mean what they said to her - and instead fuelled a lot of her energy into lifting Apollo up. Whilst she would never get into physical fights when it came to defending Apollo - though she came close quite a few times - she seemed to have an affinity for picking up on lies or hypocrisy from the other kids.

Aphrodite had her first magical experience at the age of six. After a particularly rough day of her and Adonis defending Apollo from the nasty kids in their class, Aphrodite had come home with pent up anger that hadn't been released. If you asked her why she was angry, nothing more than an incomprehensible string of words about how unfair it was to Apollo would be her response. It was during a questioning session by her parents to find out more about the day's incidents that Aphrodite had her first magical experience; in her anger, a couple of vases in the living room smashed with the water boiling inside. That had calmed her down - scared her, actually - enough to be persuaded to go and play with Adonis and Apollo in the garden whilst her parents discussed something. To this day she doesn't know what they discussed but she likes to think it was a commendation for having so much love for her twin that it caused her magic to happen.

Her having magic - and later finding out that Adonis was magical too - gave Aphrodite a sense of hope. Sure, for the time it took for Apollo to have his first magical experience, she was upset that her twin didn't share their power, she was mostly happy that she and Adonis had a new means of protecting him as a last resort. Naturally, Aphrodite knew nothing about the laws regarding magic and didn't know where to begin in controlling it, but she felt better. It also gave her a distraction; her parents had since talked about a magic school where people learned about their powers and that was all Aphrodite could focus on - especially after Apollo had his first magical experience which meant she and her brothers would be attending the same school still. Whilst other kids wondered where they'd go or what school house named after some author they'd be put in, Aphrodite wondered if she'd be a brave Gryffindor or perhaps the smartest Ravenclaw that ever lived.

Now in Hogwarts, Aphrodite can safely say she doesn't miss her muggle life. In fact, she's confused as to how she survived in it for so long.

WIP
Add a photo to this gallery

Retrieved from "https://dumbledoresarmyroleplay.fandom.com/wiki/Aphrodite_Liu?oldid=1074732"
Community content is available under CC-BY-SA unless otherwise noted.