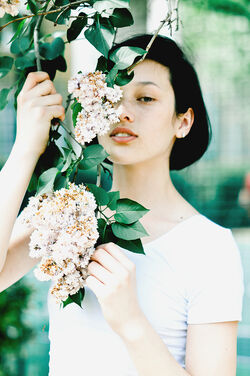 History:
There were two Muggle lesbians who were falling in love while attending a university in Seattle, Washington. Beverly Mendoza was a transgender woman of Puerto Rican descent and Hathai Omlamai was a cisgender woman of Thai descent. After they graduated, they had eloped and moved to Chicago, Illinois where they pursued careers as art and history teachers respectfully. Once they had reached a comfortable point, they had decided to start on several procedures which resulted in their very own child. Upon her birth on May 29th of 2018, she was named Apricot Dauenphen Mendoza-Omlamai.

Although primarily raised in Chicago, they frequently visited Thailand where Hathai's family lived. It was rumored that Apricot's lack of speech resulted from the changing between English and Thai. However, it was discovered otherwise when screening showed that the four year old had severe hearing loss. They tried to raise enough money for a Cochlear, but instead settled for getting her sleek black hearing aids. While it saved her hearing for most of her childhood, it was confirmed that she had been stripped of it all when she was nine.

Successfully, she had learned four languages including English and Thai with their sign language equivalents ASL and TSL. The Mendoza-Omlamai family moved to St. Paul, Minnesota so that Apricot could attend the Minnesota State Academy for the Deaf in Faribault. Since it was a residential school, she remained there nearly year-round where she occasionally visited home for holidays or trips. When she was suddenly causing electronics to break or catch fire, she was immediately kicked from the institution. It confused Beverly and Hathai deeply, but they decided they would finally take Grandpa Mendoza's offer to live in Birmingham, England.

After moving over the Atlantic, they had settled into Abuelo Mendoza's larger estate in England. Apricot had just turned 11, which resulted in her getting invited to Ilvermorny School of Witchcraft and Wizardry for she had still remained in America at the time. Between Beverly and Hathai, they were more surprised that their non-binary daughter was a witch, so neither of them realized how inconvenient the location of Ilvermorny was. Upon reaching September, she was having both Pukwudgie and Thunderbird reacting to her presence, before she picked Thunderbird. When December and Christmas rolled around, it was decided mostly by Beverly that Apricot needed to start attending school in the United Kingdom.

Although they struggled, they finally reached the Ministry of Magic's Magical Education Department where they held a lengthy conversation with Ms. Saffron Carter. If they had ever managed to settle anything seemed unclear, but Apricot had transferred into Hogwarts regardless. While she struggled with her communication skills, she still survived it nonetheless. The former Thunderbird had extremely disliked the Sorting Hat, which had placed her into Hufflepuff. Since she's already survived with little friends, she's also hoping she'll be capable of making it the whole stretch of Hogwarts that way.

Personality:
Being Buddhist, she's strictly against any form of violence. Whether it's swatting a fly or killing a person, you're guaranteed to make an enemy in Apricot if you're using actions instead of words. It's believed that problems and arguments can be solved simply with discussion. However, she personally believes that excuses her poor attitude, which has started up due to her lack of communication with others (now being driven from her lack of understanding in BSL and lip reading). Frankly, the little agender is quite feisty, easily taking offense to anybody finding her to be less than despite her beliefs to be peaceful.

Apricot has always placed her family and friends, specifically her mothers Beverly and Hathai, above all in her life. It's actually been said that the Hufflepuff resembles a puppy with separation anxiety. Since she's easily left paranoid, it's always been decided that her loyalty is a one way street. Although it's never stopped her, it's made her question her efforts in protecting the rights and secrets of others. While she's always questioned it, it's probably her attachment to everybody around her, specifically those who appear to be good and nice people.

Although one for art and meaning, she's easily confused by what others say. Whether it's a joke, compliment, insult, or so forth, there's a huge chance that Apricot will be left confused. While easily confused in everything, including school which is incredibly difficult for her, she's the perfect example of smiling and nodding. It's odd enough, seeing as she enjoys conversing and socializing with other people, especially meeting other people like her (deaf, queer, transfer student, etcetera). Finally, she's mostly suffered due to her lack of organization, because she's probably the messiest person you'd ever meet. 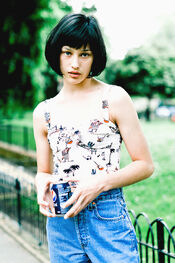 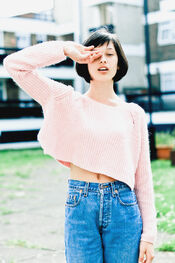 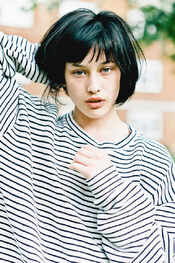 Retrieved from "https://dumbledoresarmyroleplay.fandom.com/wiki/Apricot_Mendoza-Omlamai?oldid=1074657"
Community content is available under CC-BY-SA unless otherwise noted.