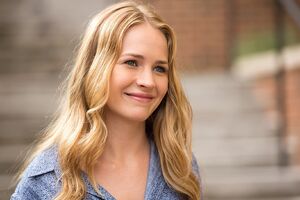 She was born the oldest child of Ash and Charity Prince. Her family is very rich so she's never really wanted for anything. She has a number of aunts and uncles that tend to spoil her with presents and giving their time to babysit her and letting her generally do what she wants. She did learn early that tantrums don't get you what you want...asking and talking does. She's always been a talker even when she's just talking to herself or her imaginary friends. As she's grown she's learned words are even more important and has better learned to use them to help lead her siblings and cousins.

Her parent's and relatives stories are their own, and can be read on their pages. She currently has three younger brothers, four female cousins and two male cousins and a number of other more distant cousins ranging from nine to newborn. As such she has a lot of experience with younger kids and siblings and as the oldest has had her actions scrutinized by the adults in her family for a long time. At first she didn't care so much but as she's aged she started caring more about their opinions of how she should and shouldn't act and has adjusted accordingly.

When she was five she was able to get out into the enchanted forest around Prince Castle and had a nasty experience with her uncle Mark. It affected her deeply since she learned there really is dangerous and scary things out in the world and sometimes you have to rely on yourself to get out of a mess you got into. In addition it taught her the importance of rules...they're created to protect you and give you important boundaries so you don't get hurt.

The last few years have seen her grow up and mature a lot developing from something of a selfish spoiled child into someone who sees the positive qualities in others and does her best to let others shine. She still very much likes to get noticed and credit for her good work but is just as happy being acknowledged as part of a team as solo contributions. She's very good at coordinating and integrating separate personalities into working and playing well together and her strong diplomatic skills have really started to shine. She hopes to live up to the family name and reputation at Hogwarts and being the first of her generation at Hogwarts she hopes she'll be able to ease the others in as they start to follow in her path.

A lot of her growth came from being the oldest kids with a ton of younger kids around all with different pasts, parents, personalities, and problems. Her mom along with her aunts set up a little primary school of sorts for all the kids. Her Mom focused on the sciences (Chemistry, biology, physics, and health), Aunt Mal on basic subjects (reading, writing, math), Aunt Elle or sports and rec, and Aunt Melinda on natural sciences (plants, animals, etc). Because of the structured learning and good individual teaching she and her cousin all have a good primary education. In addition she's gotten to know all her cousins (well the ones involved) really well. As the oldest she does her best to help teach and take care of the younger ones acting as an unofficial referee and judge when a dispute breaks out between any of the younger ones. While she's excited to go to Hogwarts she'll also miss the close knit family learning environment they have at home.

Aria is a natural leader and leads her siblings and cousins whenever they're together. She's the one who creates the games, determines what's fun and what's not, and who can and can't play. To her credit she does try to be fair and tries to make sure everyone has a good time but doesn't always succeed. Of course since all the others are younger they let her take the lead and don't question her too much as long as they're having a good time.

In addition Aria does her best to try to prove to her family that she has something special and important to offer. She's proud of her family and very interested in the stories of those she's related to that came before her. Everyone in her family (at least all the adults) are exceptional and she secretly worries she won't live up to their name or reputation. She tries hard to make herself useful and visible putting forth her best effort to prove herself. She wants the adults to notice her and her gifts and tell her they're proud of her or how helpful she is. It may seem like she needs extra attention but it stems from a concern that she won't live up to expectations.

Finally Aria is diplomatic. She really does enjoy helping the adults do things and mediating the disputes between the kids doing her best to make it fair for everyone. She's learned that words can be much more important than actions and has learned to use her words accordingly. She likes to have a plan before embarking on any sort of game and makes sure everyone understands the plan or rules before starting. She has trouble spontaneously adjusting to things but as long as things are expected or planned for she can make sure everyone's having a good time. 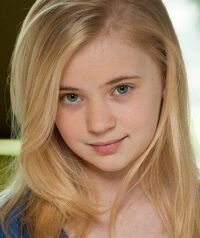 Aria has striking features. She's proud of her golden hair and blue eyes and loves to dress up and look her best. She's tall for her age with a slim build and delicate features. She knows she's pretty but doesn't mind it when people tell her that. Her face claim is Bitt Robertson.

Retrieved from "https://dumbledoresarmyroleplay.fandom.com/wiki/Aria_Prince?oldid=1092848"
Community content is available under CC-BY-SA unless otherwise noted.