Arthur David Attaway was born twelve minutes before his twin brother Alden on a snowy day in January. Arthur's birth came much easier than Alden's-- Alden had to fight to stay alive in his first few hours of life, and has suffered from various health problems his whole life. Because of Alden's weakness, Arthur feels he needs to protect him and tries his best to keep his morale up.
The boys were born to Alan and Abigail Attaway; a wizard, and a Muggle, respectively. The boys went to Muggle primary school before starting Hogwarts (along with their younger sister, Alexa), and Alden often got teased for being weaker, and unable to participate fully in outdoor games and activities. This always bothered Arthur, and while he did his best to protect and defend Alden. While Arthur was always there to defend Alden...even though he could tell it bothered his brother...still better to protect him even if he didn't like it.
Alden's first signs of magic occurred when he was eight. One of the schoolyard bullies had pushed him over into the mud, and before Arthur could defend him, Alden's emotions and magic had caused a smaller tree branch to snap off. The bully didn't get hurt-- but he did get quite a scare. Arthur saw and was happy for his brother...but he worried and wondered if his brother would have magic and he wouldn't. He secretly fretted over it for over a year until his first sign of magic finally came.

Arthur is boisterous and loud. He enjoys being around people, and participating in physical activities, and as a result is quite skilled in sports. He makes friends easily as she's strong, handsome, and social. Still...most of his friendships are very surface level and he's really bad at understanding people more than surface deep. He tends to trust people even if they've broken that trust before, and given his size and strength, has always done his best to protect those he thought needed protection, specifically his brother. He sees everyone as a potential friend. 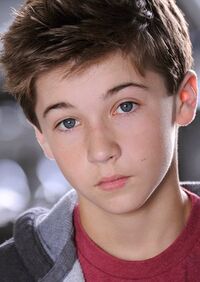 Arthur and his brother are identical twins-- both have brown hair, and brown eyes-- but the easiest way to tell the difference, is Alden is almost four inches shorter than his brother. His face claim is Dylan Matzke.

*Attaway means "'at the way'-- someone who used to live close to the road."

*Wanting to help his brother, Athur is especially excited about learning potions, even though he knows it might be a struggle since subtly and waiting aren't his strong suits.

*His MBTI is ESTP.

Retrieved from "https://dumbledoresarmyroleplay.fandom.com/wiki/Arthur_Attaway?oldid=927595"
Community content is available under CC-BY-SA unless otherwise noted.