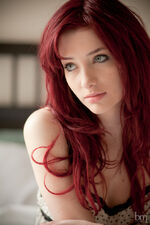 Before I die, I wanted to write out my history. Lily did it... I felt like I should too. That no longer seems essential, however. My life had many good parts, it had many bad parts, but in the end, I failed. There is nothing more to do, except take down as many Black Parade members as I can before I leave this place. Even if I wanted to take the time to write down my history, I don't have the time to take. I made my decision, and I need to immediately take the required steps that precede this act of suicide. I leave a copy of the letter I left for Teresa Black, but nothing else. The way I want to be remembered is the way that Lily remembered me. Her memories of me can be found in her safe house.

I owe you an explanation and an expression of gratitude.

I have lost everything I originally cared about, which wasn’t much. Lyndsay and Lily are both gone. I lost any kind of friendship I might have had with Renee. Phoebe is gone. Luca is becoming increasingly distant. You’re the one loyal friend I’ve got left.

I chose to live in that simulation because I felt that I wasn’t done. I still had people to protect. Renee doesn’t want my protection; she’d rather I just died. I tried to protect Lily, through Phoebe… but in the end, I failed, and instead of finding the closure I needed... I realized how empty my life has become. I couldn’t protect any of them. I thought I might stay for Luca, but he’s distant now… things are not the same between us. Teresa, you have Ferlen to protect you, and Rose to protect. You have your sister. You have friends in Marlene and Hope. You simply do not need me.

You were the one who reached out to me, and for that I am extremely grateful. You could have let it go, and let me continue walking alone in this world… but you didn’t. You ignored our past squabbles to just be there for me. I know that if I went to you in person, you would try to stop me- as I suppose you would be obligated to. Teresa, my story is simply over. I’ve done what I can to help protect people one last time- that’s what the note to Benjamin is for. Make sure he gets it, will you? Also enclosed is one of Lily’s memories, of the potion recipe she made that cured Mary. She meant for Mary to receive it, so could you give that to her as well?

I really don’t know what else to say to you… except that I really am grateful for our friendship, as short-lived as it was. I’m ready to go and take the same peace that Lily, Phoebe, and Lyndsay have now… and one day, I hope to see you on the other side.

This character has been requested to be preserved by Bond em7.

Retrieved from "https://dumbledoresarmyroleplay.fandom.com/wiki/Ashley_Flame?oldid=523598"
Community content is available under CC-BY-SA unless otherwise noted.