Start a Wiki
A

i wanna be, wanna be you

Asriel is extraordinary. It seems no matter what he does, he's perfect. A perfect combination of rough and graceful that leaves people intrigued yet confused like he's the one puzzle they just can't figure out. Try as you might, Asriel isn't one to be defined by normal means. He doesn't fit anyone's standards and quite simply, belongs outside the box. He's a certified sweetheart, everyone's Prince Charming, a cunning trickster with a devilish sense of humor, a graffiti artist with a heart of gold, a precise dancer with excellent aim. It's not that he pretends to be all these things, it's that he is all these things. A person of many faces and facets, his personality might as well be a mix-and-match game.

Asriel somehow fits everything and nothing at the same time. He prides himself in his sense of individuality and places giant emphasis on originality in everything he does. There are no short cuts for genuinity in his philosophy, and it shows. He's a very sincere and honest person but prefers not to be upfront about everything. In fact, he's pretty secretive when he wants to be. While he does believe honesty is the best policy, he's a top-class liar and hides what he needs to hide. He's not going to lie and say he doesn't hone a lot of secrets because he does, and it's not because he doesn't trust anyone with them, he just doesn't bother to revisit the reasons behind keeping those secrets.

Loyal, trustworthy, and just all-around nice, Asriel is practically the perfect friend. Even when you give up on yourself, he'll never give up on you. He's not a very questioning person either, which may make him seem naive, but if he had a real reason to be suspicious of you, he would've said it a long time ago. It doesn't matter if you're the cashier he just met at the store or his childhood friend, he treats everyone with respect as well as love. He doesn't really have the ability to hone any amount of spite within himself anyway. He's just not a hateful person. Screw him over a million times? He'll barely get angrier than slightly upset and not for long either.

If it isn't obvious already, Asriel's pretty nonchalant. He typically doesn't take a lot of things seriously and would rather focus on his own interests than anything else. He's also extremely lazy and doesn't like putting more effort than he needs to into really anything besides, again, his own interests. It's a shame too because he's a very sharp-minded individual who might benefit the world a lot more if he expanded his horizons beyond brick walls, dance studios, and motorbikes. He's certainly some sort of genius, and most of the older figures typically see that in him, but no matter how much they encourage him, he strays from every path set out for him.

Intrigued by thrill since he was young, Asriel has a soft spot for danger. Weird? Yeah, he's been told before. He loves taking risks. Diving off cliffs, gambling, street racing, spray-painting the side of the Ministry building, you name it. There are no limits to things he'll do. Honestly, danger gives such a feeling, you could almost call it a high. The more drastic the consequences, the more he'll want to do it. He argues it's compulsive, something he can't resist which should be highly concerning for anyone who knows him. Eventually, most people get used to it and just learn to carry first-aid around with them whenever they hang out with him, though he doesn't really need it anymore. Better to be safe than sorry.

If you haven't figured it out by this point, Asriel is very, very spontaneous. Unpredictable is an understatement. You never know when he's going to do what and why. It's really an issue but also provides for a pretty fun time. He's filled with energy on a constant basis so he's pretty much buzzing around 24/7. Don't room with him if you plan to ever get a decent sleep because he never seems to sleep. Sleep probably isn't even in his vocabulary. Occasionally, he crashes and takes short four naps but those never happen in the presence of other people (it's because he looks really cute when he sleeps--he cuddles with a giant TEDDY BEAR--and he can't let anyone see him being a huge softie). He's also very talkative. See if he was energetic and quiet, it wouldn't be a problem, but because he's energetic and never shuts up, he can become extremely annoying very quickly.

Jolie and Spencer were in the third generations of their families to live in America. After their parents had immigrated to America after the Korean war, their family was quick to adapt to Western ways as they thrived and grew in a new more stable environment. They met each other in an arts college in California. Spencer had lived in that city all his life while Jolie had moved from Oregon to attend school there. Their relationship had a rocky start and took quite a while to finally kick off. It was worth it because three years after they graduated together in their class, they married and moved to Santa Barbara.

Jolie had become a dance choreographer by then, even managing to score gigs with some of the biggest stars at the time and train their backup dancers. Meanwhile, Spencer had invested his time in making his dream of becoming a musical actor come true. Luckily, Spencer hit it big in just two more years, going on to work in New York. Prior to this, Jolie discovered she was pregnant. It came as a surprise to both of them but it was a welcomed surprise nonetheless. Although the twins were born in Santa Barbara, California, they never got to know what it was like to live there, because five months after their birth, they moved to New York City so Spencer could pursue Broadway.

Growing up with busy parents make you lose a lot of opportunities normal kids have, but it also gives you a lot more opportunities normal kids don't have. That's how Asriel saw it since he was five. Having their whole apartment to himself and his twin brother (and their nanny, but she could never catch them anyway) let him do really, whatever he wanted. That's pretty much what he did too. Anything he wanted. Which included drawing on walls. Yeah, he was that kid. The one you knew was going to grow up to become sort of artist because they couldn't understand that their crayons belonged on paper and not on walls. Asriel never learned that lesson.

Since both of his parents had graduated from Ilvermorny, they weren't surprised when they came home one night and found the six-year-old bouncing around their apartment, chasing a flying vase. Though, they considered it might be time to start trying to find other outlets for Asriel's energy, or at least somewhere else to take him so he isn't constantly destroying priceless artifacts while they're gone. This is how he became a child model and eventually a child actor. Asriel definitely had the looks to pull off being a model, even from a young age, and it seemed he was born to be in front of a camera. After just a few photo shoots, clothing outlets, fashion magazines, and the like were requesting to have him on magazine covers, blogs, and advertisements. It wasn't long before his face was plastered everywhere in the Wizarding World.

Just like his father, he had a passion for acting as well, and starred in his first movie at the age of ten, playing a minor side character named Finn. It was great publicity and landed him three more movies and a TV Show deal for at least three seasons. He somehow managed to maintain everything his acting career and modeling career while attending Ilvermorny with the help of his personal manager and agent as well as his parents. In Ilvermorny, he picked up some questionable habits, however. Remember him being that kid that drew on walls? Well, that habit transferred in the form of graffiti. Once he discovered graffiti art, he could never go back. He used it as a stress-reliever, a form of self-expression, something to keep him busy in between shooting and school, and just all around entertainment.

He was good at it too, immensely good. He worked everywhere and anywhere. You could find his pieces on the sidewalk, on buildings, on signs, anything really. He could make complete works of art with just a spray paint can in his hands. People would take pictures of it and put it up on Witchagram. He became an infamous name (he signed his pieces with "ABC-H"), yet no one knew who he really was. He was also introduced to motorbike racing. No, excuse me, magical motorbike racing. Not only was it more exhilarating than the norm, but it was also... kind of illegal. Well, the type of races he attended anyway. Everyone here played dirty, and the more destructive the spells used, the better. He got on the scene when he was thirteen (technically he needed to be at least fourteen to even attend, but what's the harm in lying?) and had already made a name for himself in some few months.

For a change of scenery and new opportunities, the Hyun family moved to the UK. If Asriel could get away with graffiti art and illegal motorbike racing in America, he sure as hell was doing it in the UK too. His plate was beginning to get a little overloaded though because shortly after settling in, he was scouted as potential star material by Reducto Records. Asriel was a bit addicted to constant attention by the time he got to Hogwarts and was slightly miffed by the lack of recognition he received from his new peers. His personality quickly made up for that though. It was kind of hard not to notice him, everything about him screamed "Look at me! c:" like there was a glowing sign over his head or something. 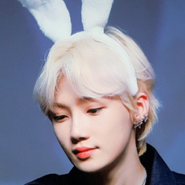 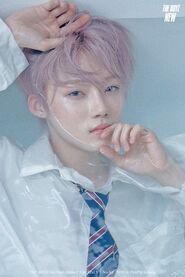 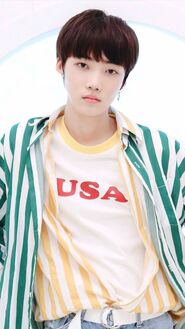 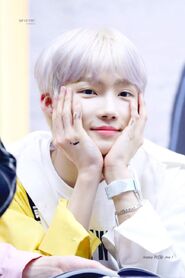 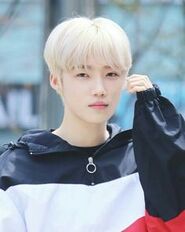 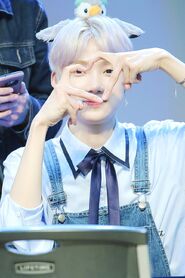 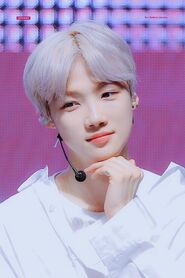 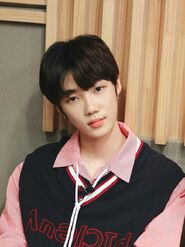 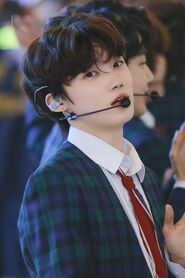 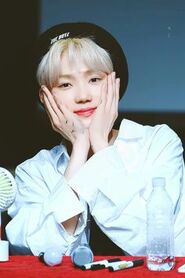 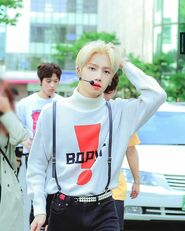 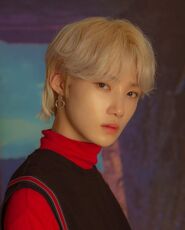 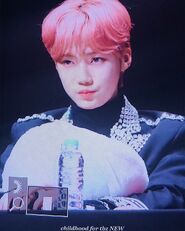 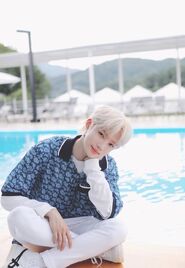 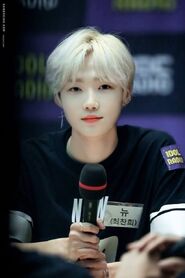 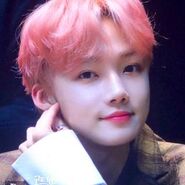 Add a photo to this gallery
Retrieved from "https://dumbledoresarmyroleplay.fandom.com/wiki/Asriel_Hyun?oldid=1070675"
Community content is available under CC-BY-SA unless otherwise noted.