Astrid was born in Muggle London to Mr. and Mrs. Whitewater who are both muggles. When she began showing signs of magic her parents panicked. The headmaster of Hogwarts however visited the Whitewater's reassuring them that Astrid was not dangerous and that she was just a normal witch. Her parents decided to send her to Hogwarts after a long discussion with the headmaster (Both parents had wanted to send her to a normal muggle school.) They decided it was probably best with Astrid to be with her own kind. Astrid went to Hogwarts knowing no one and feeling a bit lonely. Though she wasn't shy and talked to people without fear. After a while she made some good friends. She wasn't too bad with her studies though she had attendancy to not participate if she felt like it was against her ideals or felt uncomfortale. Her parents were actually proud of her being a witch but Astrid still feels otherwise. She feels like shes a burden to her parents and wishes she could right it.

Astrid is a natural leader and takes charge in tricky situations. Though her ways might not be understandable to others she is trying to do what her heart is telling her rather then even the rules if she feels they are unfair or holding her back. She is proud of being a muggle-born though others may despise it. She is brave, braver then any women to do what she thinks is right. She would be a dangerous opponent to have since she sets her own rules and doesn't back down.

Her model is Hayley Atwell

Her patronus is a turtle

Her boggart is sickness 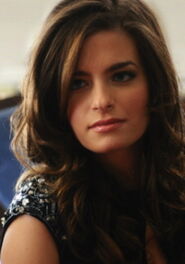 Ariel Gallagher - Acquaintances
Add a photo to this gallery

Retrieved from "https://dumbledoresarmyroleplay.fandom.com/wiki/Astrid_Whitewater?oldid=529125"
Community content is available under CC-BY-SA unless otherwise noted.