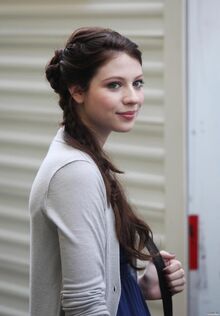 On June 27th in Tampere, Finland, Astrix Chloe Ledbury was born to Joseph and Helmi Ledbury. While her father was an unemployed English Muggle, her mother was an unemployed Finnish Muggle. Although her parents technically provided for her, she was quite ignored as they focused on their crumbling marriage. After four miscarriages, it was decided there was a lucky fifth pregnancy but it ripped them apart more than anything.

After turning one, her father and mother were separating and she was moving to live with her wealthy grandmothers in Dumfries, Scotland. For now, her father would be attending rehabilitation for alcohol abuse and her mother would be remaining back home. Until then, Flora and Estelle Ledbury would be raising their granddaughter in a quite privileged setting. As if not missing her mother, she was living an incredibly happy life as a young child.

Although raised surrounded with money, she had learned from a young age that she worked for what she wanted. Normally, she was treated like a functioning adult instead of a struggling child. After all, her father was coming in and out of rehabilitation and her mother was visiting here and there from her home country until she passed away in a failed robbery. However, her biggest obstacle shaped in the form of social standards.

Upon starting school, she was already realizing she was no longer fitting what she thought was normality. Overall, she was a nonconforming freak who ignored the confines of society that brainwashed her fellow students. While she performed the unthinkable, she befriended Iris Randle and Wren van Heemstra. At least, she tried to and gained the official title of "Wren's Girlfriend" but she never dared consider herself such even if she occasionally fancied him a little bit.

Although she appeared like a mythical creature, she had not expected the bursts of magic that followed from around ages seven through eleven. At first, she was terrified as she had been relatively bullied in the past so she panicked in thought she had truly evolved into some odd freak. However, she embraced the fun sparks and flickers as fictional witch powers. Upon her eleventh birthday, she was cackling over the irony of it all.

After discovering she was to be attending Hogwarts School of Witchcraft and Wizardry, she was sending a saddened letter to Wren about how she was transferring to a strict private school. For Iris, the pair had argued over how the other had changed before they stopped talking altogether which destroyed the little witch’s heart incredibly. Besides that, she was excited after practicing fake potion brewing and spell casting in her basement for years, but it turned out Hogwarts would be less glamorous than expected. After arriving on September 1st, she was sorted into Hufflepuff but failed to realize the familiar faces from Muggle school.

For two years, she mastered Transfiguration and Herbology or has stepped over into the path to do so. Although she's skilled in Potions, she's discovered that the lack of complicated information in the subject bores her deeply. Nowadays, she's obsessed with missing due dates and skipping meals as she's analyzing flourishing flora and fauna around campus. While she's busy fangirling over the complex gender system, she's trying to strengthen her study habits, but she's only a third year.

Although she's never tried, she's always been glued to the outer side of the box. For example, she's constantly speaking Pig Latin instead of English, poorly designing her own handcrafted clothes through knitting or upcycling, seriously collecting or preserving leaves, and actively protesting against any injustice even if it's causing a punch to be flying towards her face (it's happened a couple of times before). While she's sometimes considered fearless or relentless, she's simply accomplished stepping from the bland conformity of civilization.

Whether she's aggressively defending the victims of oppression or harassment or casually admiring the whims of nature, she's overall interested in the inspirations of fellow humans with their opinions and mannerisms but more so the functioning cycles of life around them. Normally, she's preferring lonely environments, but she's still fond of socializing positively to be gaining at least minor friendships to be relied on later. Overall, she's always appearing off like an ill painting if she's not arguing or befriending those around her.

Although she's normally a cluttered and flustered mess, she's recently developed weaknesses that have been noted to draw such traits out of her. After all, she's going to be more scattered than usual while dealing with a nasty case of dysphoria with both her gender and body. Maybe, she's holding just as many insecurities and doubts as everybody else she's trying to separate her own identity from.

*Trixie's wardrobe is mostly all clothes she gathered while thrifting or upcycling, but she also knits the occasional pair of gloves or socks.
*Trixie's Pig Latin has evolved over the years from stuttering through the words upon first attempting to speak it at age six to rambling through the words fluently.
Retrieved from "https://dumbledoresarmyroleplay.fandom.com/wiki/Astrix_Ledbury?oldid=963885"
Community content is available under CC-BY-SA unless otherwise noted.