Aurelien was born in the very small town, of Ornans, France. He was born to Half-Blood Wizard, Lazare, and Muggle, Marcelline, on September 15,2002, along with his Fraternal twin sister, Arielle. He is the third of eight children, being born 3 minutes before his sister. The small population of Ornans, and his large number of siblings, Aurelien began to seclude himself, and only socialize with a small group of people. He was often seen as a weird loner, at the muggle school he attended before Beauxbatons, causing him to become even more skeptical of befriending people. When he was eleven, he left to attend Beauxbatons with his sister. It was quite frightening, considering that the school had a bigger populatioin than his home town. It took him a long time to get used to it, and constantly clung to his sister, who was quickly adapting to the large amount of people, since she was a social butterfly. She soon forced him to make friends, by refusing to hang out with him. He spent most of his first year without any friends. He spent a lot of time in the library, studying for classes, and just reading books he thought were interesting. All the time he was there, a small group of people were always there, in some sort of study group. He refused their constant invites to join them, not trusting them. After several weeks of badgering, he finally accepted. He soon realized how similar they were to him, and began to see a possibility of friendship. He still remained cautious of them, and didn't fully accept them as his friends until the begining of his Second Year. Now in his Seventh Year, this small group are the best friends he has every head, and he would do anything for them. 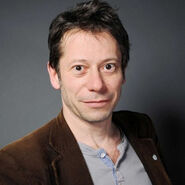 Monique Trepanier (Sister 9)
Add a photo to this gallery
Retrieved from "https://dumbledoresarmyroleplay.fandom.com/wiki/Aurélien_Trépanier?oldid=650785"
Community content is available under CC-BY-SA unless otherwise noted.