Start a Wiki
This character has been requested to be preserved by 32dumplings2.

History
Serena Mulligan was a pure-blood witch who married a half-blood wizard, Phillip Urthadar. They had a son, born at the third of December, 2004, whom they named Azrael Phillip.

He stayed at home watching his parents do spectacular magic. A year later, Serena had another baby, It was a boy. His name was Edward Marius.

One day, they were watching the Quidditch World Cup final which took place in London. When it was over they had a celebration party and stayed up late. Most of the witches and wizards were drunk by the time the entire camping area was ambushed by Death Eaters. Phillip, Edward and Azrael managed to Apparate out of the campsite, unfortunately, Serena was hit by the Avada Kedavra curse by protecting her sons and husband. They fled out of the ambush and stayed at the Leaky Cauldron.

When Azrael turned eleven, he did not need a Hogwarts Professor to inform him of the event, receiving the letter was enough and Phillip and Edward accompanied him to Diagon Alley where he will recieve his wand and robes. He was very excited of the news and said goodbye to Phillip when he arrived at the Hogwarts Express.

Azrael is funny, loyal and happy. He is always looking for trouble, however, in a case where someone is being insulted, he retorts them back. He isn't very fond with Slytherins. He would duel them if he was insulted and occasionally, some of them get sent to the hospital wing. He buys many stuff from Weasley's Wizarding Wheezes to mess with Slytherins, however he is very nice and funny with the other houses. He is very skillful at Quidditch; quick, swift, and dodgy. He can avoid Bludgers in an instant and he would prefer being Chaser. When he had his Career's Advice meeting, he would like to become an Auror. 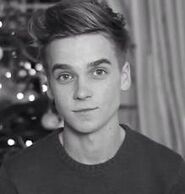 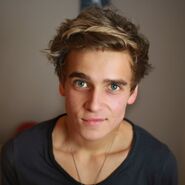 Retrieved from "https://dumbledoresarmyroleplay.fandom.com/wiki/Azrael_Urthadar?oldid=650979"
Community content is available under CC-BY-SA unless otherwise noted.