November 21, 2002 marked the day that George and Linda Carter became parents for the first time.... though certainly not the last. Bradley Lucas Carter became the oldest in a house of six; Bradley has two younger brothers, and a sister who's the youngest. His first signs of magic came when he was about six. He was upset over something his brother had done, and a door slammed behind him. It was quite a surprise to his Muggle parents. Five years later, Bradley got his letter to Hogwarts, and off he went. And much to their parent's surprise, all of his siblings followed in kind. 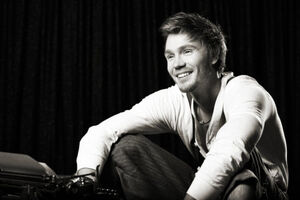 Bradley was the only one of his siblings to be Sorted into Gryffindor. His brothers were Ravenclaws, and his sister was in Hufflepuff. He made friends easily enough while he was in school, and he took a liking to Quidditch. His parents didn't want him to turn it into a career, but he got picked up by the Fitchburg Finches when he graduated, and he played with them for a few years as a Chaser. When he wasn't on the Quidditch field, he had taken a liking in school to both Transfiguration, and Defense Against the Dark Arts. His teachers had told him he should go into the Ministry... become an Auror... but for some reason, he felt that work didn't suit him, hence his decision to follow his Quidditch career.

During the 2024 season, he got a nasty Bludger to the shoulder which took him out for the rest of the season. He wasn't well enough to make the team the year of the Quidditch Cup, but he followed his team there anyway, working for their public relations group. He figured his career was probably over, and he missed his family, so he moved back home. He's applying to Hogwarts, figuring he might be able to train up the next generation of wizards to become something useful. He was hired on his first year to help teach Transfiguration.

Bradley taught Transfiguration for a few years, and eventually became Head of Gryffindor. He took on Melinda Bagman as a student as she worked to become an Animagus. When his sister got pregnant unexpectedly, things changed. He took a year off to help her with that transition, since their parents weren't the most understanding. Following that, his old team in America was seeking a new manager. He managed the team for another two years, whipping them into shape.

In the summer of 2034, Bradley received a letter from Silas Chevalier. Seems his old colleague had been named Headmaster, and he asked if Bradley would come back to teach Flying. With his Quidditch team back in gear, he handed those reins over to another manager and made his way back to Hogwarts Castle.

Bradley has a very "go get 'em" personality. He chases after his dreams, and encourages others to do the same. He knows how to have a good time, but he's also very business-like when he needs to be, and it comes very naturally to him. He's a natural-born leader. When he's around his family, he likes to joke around, and he's quite protective of his youngest sister. With students, he doesn't coddle-- he demands hard work, and he knows that they can produce their best if they want to-- they just need to try hard enough. It sometimes comes off as strict, or tough, but he believes that students achieve their best when they're pushed, not cradled. Life begins at the edge of your comfort zone... not inside it.

Bradley is fairly tall, and has blond hair and blue eyes. He likes to dress nicely, understanding the importance of dressing for success. His face claim is Chad Michael Murray.

*His MBTI is ENTJ
Retrieved from "https://dumbledoresarmyroleplay.fandom.com/wiki/Bradley_Carter?oldid=909746"
Community content is available under CC-BY-SA unless otherwise noted.