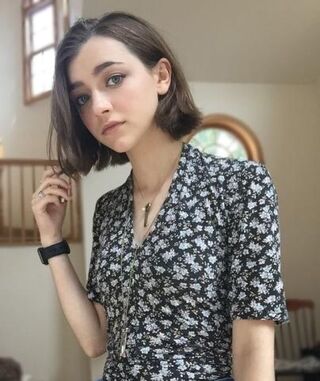 This little Parselmouth is a little bit different. Very much a scatter brain, Brisbane is always thinking of multiple things, always pushing the important things at the time out of her mind. What she can do is always on her mind, if her focus is always shifting. Easily distracted by everything and anything, Brisbane finds it hard to focus on one thing at a time or what she is meant to be focusing on. The one thing always on her mind is that one thing that she can actually concentrate on. Snakes are the one thing that will gain Brisbane's attention no matter what, unless it has something to with how her family died. A way to get Brisbane's attention, without using anything to do with snakes, is, and always has been, doing impressive feats of magic right in front of her. Brisbane has always been amazed by magic, even though she now knows she can do it. Brisbane doesn't have a full understand of her ability yet but tries to find out what exactly she can do as much as she can.

Brisbane is normally very quiet when not around someone she sees as a parental figure, which isn't many people still living. People that look like she is related to are the only people she will confidently speak to. Friends aren't things Brisbane makes easily, just like talking to people. She gets confused easily when people talk to her, having to overthink what people say to make sure she understood what they said. People aren't her strong suit, unlike snakes. First of with new people, Brisbane is really shy, not saying much, being very inaudible when she does talk. After a long time getting to know people, Brisbane will talk a lot and do anything to help the person, if she trusts them enough. Brisbane's true act of trust is telling people what she can do, which takes a long time for her to tell people. She has some trust issues as she doesn't want to get to close to someone and hurt them in someway.

Brisbane's mood tends to change very quickly. One moment she can be very happy, nothing being able to bring her down, the next second she can seem very sad and depressed, all because she suffers with survivor's guilt, and a big case of it to. She still thinks her last family will come back, even if deep down inside her believes they will never come back to get her, which is why she finds it a little hard meeting people that want to adopt her.

The life and past of this Parselmouth all started with one little encounter between a Norwegian-Italian women and an Icelandic-Australian man in the man's birth place, Iceland, that lead to five children, the last being Brisbane. Adrian was a Muggle with distant magical blood, and also a Parseltounge ancestor on his Australian side. Most European countries may have seen being a Parseltounge as something related to Dark magic but the Australian Aboriginals saw it as an amazing gift to have. The genes had been passed down through the Woom's for a long time but never showed itself, both magic and being a Parselmouth, until Brisbane was born.

Brisbane was the last born of Adrian and Lucy Woom and also the only girl to come from the two. She grew up in a noisy, messy but happy house in Iceland's capital. By the age of 4, Brisbane could fluent speak Icelandic and English, as her father wanted her to be ready for if they ever went to his grandfather's homeland, Australia. She loved her family, even if her 4 older brothers drove her up the wall

Everything changed though when Brisbane's first sign of magic happened. Her eldest brother was annoying her like usual, until something unusual happened that changed the 5 year old's life forever. That was when Brisbane got extremly emotional, more than she had ever before, and unwillingly started to do magic. The bottom floor of the house stated the shake, effecting the structure of the already stretchy supports of the house. It was never Brisbane's intentions to bring down the house but that is what she did. The house started to come down and all Brisbane remembers that she was pushed under a table by her older brother, in hopes that she would be safe.

The house came down and only one person walked away from the disaster, Brisbane. Being under the table helped keep Brisbane alive. She had a few broken bones and a few cuts but nothing as serious as her family suffered. After the whole thing, Brisbane was put into an orphanage and was all alone, even though she had family she never knew of. Brisbane's mother's side, which happens to be Millie Green's mother's side as well as they are cousins, was never an option for Brisbane to go to because her mother never wanted any of her children to go to that side of their family if something happened to her and Adrian, all because Lucy thought what happened to her sister and oldest niece was a little bit to suspicious. A witch worked in the orphanage Brisbane went to and explained to her what happened, which didn't help her much.

Brisbane had been in the orphanage for almost two years when Adrian and Lucile Knot turned up at the orphanage. They fell in love with her and vice versa. They only lived in Iceland for a short time before Adrian moved to Wales for work, taking Brisbane and Lucile with him. That was when the very Pure-blood family found out Brisbane could speak to snakes and they didn't like that.

She was playing outside when an Adder found its into the backyard and instead of biting Brisbane, started to play with her. That was until her adopted parents came home and started attacking the snake, which made it angry enough to bite Adrian, surviving due to be an wizard, Brisbane talking to the snake the whole time. Adrian realized what Brisbane was and thought she made it bite him. He couldn't deal with the only way to keep his legacy going was with someone different and let Brisbane at Lil Bundles, telling her to stay there and play with the other kids and they would come back soon to get her. They never did. Now all that is left is Brisbane's future

WIP
Add a photo to this gallery
Retrieved from "https://dumbledoresarmyroleplay.fandom.com/wiki/Brisbane_Woom?oldid=1018922"
Community content is available under CC-BY-SA unless otherwise noted.