Cadan is very much how he was when he was younger, inquisitive and curious. He has a hunger for knowledge and likes to challenge himself with stimulating tasks and projects that require time, dedication and an apt knowledge. He feels gratification for completing said things and finds himself becoming more and more of a workaholic due to the exciting and erratic nature of his job. Cadan is a rather pleasant person; he's polite, approachable and is good at making another person feel comfortable enough to hold a conversation with him. Said skills have grown considerably since becoming a journalist but they're rooted in his inclusive upbringing. He holds his professionalism extremely highly, however. A lot of his life, with nothing else in it to stray him away, is dictated by work. He'll travel the country, do basic tasks and uphold relationships in light of his work. Reporting for Minerva Publishing House comes first and he has yet to be told or shown any different. Not that he'd listen; right now, it's working just fine for him. He has a dry sense of humour, one where he isn't afraid to self-depreciate or joke about others. Though he can be callous in his words, Cadan has a paranoia that he goes too far and is constantly, after telling a joke, asking the people involved if they're okay with what he said. Moreover, he's an extremely well spoken man; it takes time for some of his jokes to be perceived as jokes due to his formal language. In recent months he's trying to become a little less so, but it's a big change for him as he feels like it compromises some of his professionalism.

Given how dedicated he is to his work, Cadan often ignores his emotional needs. He's one to suppress his sadness and anger, viewing them as hindrances to whatever project he's working on currently. Whilst before he found writing to be a creative outlet, Cadan now struggles with expressing his emotions when he needs to. With not many friends kept since graduating Hogwarts and his family often being too far away, Cadan doesn't know how to tell people how he feels. Subsequently he feels burdensome when he does, preferring heavily to be the person to listen to peoples' problems rather than reveal his own. He's a little more versed in anger, being known to burn stacks of paper at a time if they frustrate him enough. Anger is the only emotion that can elicit such a strong response from him and that in itself is a direct cause from being so work-driven. Many believe - including himself - that he puts himself under unnecessary pressure to ensure the best possible work out there. He's been known to put himself in dangerous situations to ensure he can deliver the perfect product to the wizarding population; another large factor concerning his stress. Mostly, however, Cadan is someone who doesn't know how to deal with his negative emotions and truly needs someone to help him work through underlying issues that have been festering for some time.

Arthyen Pascoe always felt cheated by the Sacred Twenty-Eight system. His family, the Pascoe Family, had remained pure for generations with only a few muggle parents here and there, mostly when it was absolutely necessary to continue a branch of the family. Hell, they even went as far as shunning half-bloods in fear of diluting their pure blood, yet it never seemed to be enough. Time after time members of the family would write owls to get their purity recognised - especially over families like the Ollivanders and Weasleys - all with little fruition. Growing up, Arthyen had vowed to put an end to it, to be content with where they stood but that changed after being bullied at Hogwarts.

You see, most of the Sacred Twenty-Eight viewed the Pascoe Family as irritating pure-blood wannabes who weren't worthy of joining their ranks. Children of the Bullstrode's, Rosier's, Malfoy's and other prominent pure-blood families bullied Arthyen mercilessly, so much so that his view became that of his family before him. If they didn't think he and his family were worthy to be among them, he would force them to see how worthy they were.

Not long after graduating from Hogwarts, Arthyen married Contessa Bullstrode, a demure girl who just so happened to have enough of a crush on him to accept their marriage proposal. Naturally, given how despised the Pascoe's were, Contessa was shunned from her family and subsequently through herself into elevating the Pascoe Family alongside her husband. Their children, Lewin and Beatrix, were born quickly in the years after their marriage; by their third anniversary they had a two-year-old and a one-year-old. Everything seemed, oddly enough, harmonious. The Pascoe's had some of their tainted imagery reverted and were living an elevated lifestyle, thanks to Contessa's connections as a Sacred Twenty-Eight member. Their children were progressing nicely in their skills and Arthyen had taken up a job in the Ministry, aspirations of becoming Minister being in the forefront of his mind.

Everything changed when Contessa 'disappeared.' To this day there are rumours about the circumstances of her disappearance. Most, especially within the Sacred Twenty-Eight, choose to believe that Arthyen murdered her because her purpose, to elevate his family, had been fulfilled. The larger majority believed she had ran away to escape her life, something a few of her sisters had done in years prior. Regardless, the Pascoe's continued to enjoy a relatively successful social life despite all the allegations and Arthyen continued to rise in his Ministry Career. Only he knew, from evidence found in his room, that Contessa had been murdered by her brothers for her marriage. Now, Arthyen had married her purely for her blood status but even he felt some form of guilt knowing if they hadn't gotten married and had kids, the shy, demure girl might still be alive.

To the surprise of many, Arthyen moved on fairly quickly. His romance turned to Lilliana Ashby, a pure-blood colleague who had alleged Veela blood within her ancestry. She wasn't his first choice, not by a long shot, but he decided that she wasn't sore on the eyes and he could rough a marriage with her. Much like Contessa, within two years of being married a son and daughter - Cadan and Kerra - had been born. Cadan was a rather happy child growing up, oblivious to his father's ways. After Kerra's birth, Arthyen had more opportunities at the Ministry and thus Lilliana was left to raise the children. Of course she knew of the Pascoe belief of self-elevation but chose purposefully to not install it in any of her children; biological or step. Thus, Cadan grew up with the mindset that he was happy with how his family was received, much to his father's detriment.

Cadan was always inquisitive as a child, curious and wanting to know more. Whilst his siblings might've dozed off and yawned, ignoring the early magical education from their Tutor, Caden fervently made notes, eager to get a head start on his wizarding knowledge. This thirst for knowledge was well suited for the young wizard; he had his magical experience at five-years-old, highlighting his prowess with magic. It was a simple affair - table levitating for a few seconds - but enough for him to be thrusted by his father into a more rigorous tutoring education, separate from his siblings. Most would complain but Cadan's thirst for knowledge prevented him from seeing anything ill within it. He continued to study and study until he received his letter for Hogwarts.

It was a tossup all along for which house he'd be in. His father had predicted Slytherin as Cadan had a reputation for using his intelligence to get what he wanted, whilst Cadan himself, his siblings and mother placed him more in Ravenclaw. Both proved to be correct, him being a hatstall for both Slytherin and Ravenclaw. With input from himself and a greater love for knowledge over getting his own way, Cadan was sorted into Ravenclaw where he, as expected, flourished. It was during his time at Hogwarts where his father's increasingly unstable personality became completely unhinged. In a fit of rage, he destroyed many houses across Britain whilst on Ministry duty, murdering various wizards and muggles in the process. Cadan was only in third year when his father was sentenced to life in Azkaban. He endured some bullying for it, mostly teasing and prods by the Sacred Twenty-Eight kids that it was fate, but Cadan ignored them. To him, he was a Pascoe only in name and thus has little connection to it.

His resilience came through and he graduated with stellar grades, immediately landing a job at Minerva Publishing House where he's been ever since. 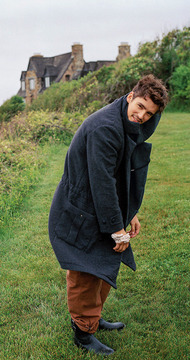 Retrieved from "https://dumbledoresarmyroleplay.fandom.com/wiki/Cadan_Pascoe?oldid=1003841"
Community content is available under CC-BY-SA unless otherwise noted.