Calen grew up a rich child.He was the second and youngest child of Kelia and Bryant Gilcrease. His sister, Kathleen, was two years older. He and his sister, were always teased by the Muggle children that lived near them for being spoiled rich kids. He always hated to leave the house in fear of being tormented. Calen and Kathleen set up a Quidditch pitch in the field they owned behind their home. Bryant put enchantments on and around it so it would not been seen by any Muggles.

Calen got his letter from Hogwarts when he was 11 and was sorted into Slytherin where he would stay for the next 7 years. He took an interest in Healing and Wandlore. When he was able, he took both classes, and they became his to favorite classes. When he took his OWLs, he got many O's and a few EE's. At the beginning of his Seventh year, he met a girl named Rose Wolfskill. They became good friends, and eventually started dating.  At the end of his Seventh year, he took his NEWT's and got an Outstanding level.

After Calen graduated from Hogwarts, he had absolutely no idea what he wanted to do. He had the pressure from his family to join the Ministry since almost everyone from both his mother and father's families had always worked there. He decided that he didn't want to spend his life in an office. He wanted something that he enjoyed. He thought of his skills and what he could use them for. His first thought was Healing. He had always done well at it in school and it had always been fun. On his way to St.Mungos to see if he could get a job there, he stopped by Diagon Alley to look around. He walked past the Quality Quidditch Supplies shop and noticed a help wanted sign on the outside. As soon as he saw the sign, something clicked inside of Calen's head. This is what he wanted to do. Quidditch was one of Calen's favorite things growing up and at school. He wasn't good enough to go professional, so this was the next best thing. After be accepted for the job, Calen became a hardworking employee, do everything he could. A few months after he got the job and saved up enough money, he moved in with his girlfriend,Rose. Shortly after they moved in together, Calen proposed to Rose at his aunt's wedding. They were now a happy, engaged couple. At work, Calen continued to work hard, hoping to earn a little extra money for the wedding. The long time owner was quite impressed with the work that he had done and told him about his plans to retire. He had been waiting for a hardworking and dedicated person that would be able to successfully run the store and he decided that Calen was that person. He offered Calen the store, and he gratefully accepted. He is now running the store to the best of his ability. About a year after he and Rose got engaged, they finally had their wedding. There was a beautiful ceremony and reception on the grounds of his parents' manor. Rose and Calen are now living happily in their apartment, with their son, Blaise, and hopefully another addition in the near future

Calen has brown hair and extremely dark eyes. He is tall and muscular. He is always smiling, unlike a lot of other Slytherins.

Calen is very stubborn and cunning. He is also extremly smart, surprisingly he wasn't put in Ravenclaw. He is really nice, unlike most Slytherins, and will always help when he can. 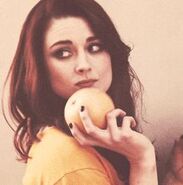 Blaise Gilcrease (Son)
Add a photo to this gallery

Retrieved from "https://dumbledoresarmyroleplay.fandom.com/wiki/Calen_Gilcrease?oldid=963948"
Community content is available under CC-BY-SA unless otherwise noted.