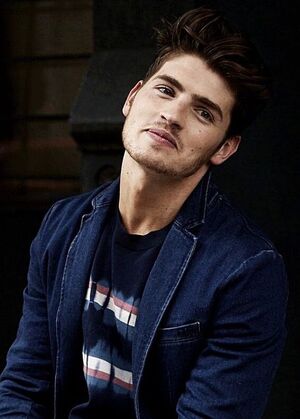 Callum is a very smart child and he almost has an instant working brain. Anytime someone gives him a problem to solve it only takes him a few minutes before he gives them the answer, depending on the difficulty of the problem or question. Callum's mother always tells him how gifted and talented he is, and he was born a genius.

Callum though hates being smart, he doesn't like all the pressure that is put on him and he wishes that he was average like everyone else. He knows the only reason why people are friends with him is because of his brains and they can take advantage of him, and so he doesn't have any close friends because he doesn't want to be used.

Despite Callum looking nice and innocent, he really isn't. He snaps at people a lot and is negative too much, but it's the weight of the pressure on him that makes him lash out so much. In reality, when he's alone he's very happy. He loves working on little projects and listening to music and just enjoying life without the pressure of everything else.

Unless someone is willing to take the time to dig through all of Callum's emotions, then they're never going to know how sweet and loving and kind he is. On the surface, he's the golden teacher's pet, but underneath his facade, he's a normal, sweet 16-year-old boy.

Callum does suffer from some mental issues, but it's nothing that he hasn't tried to fix on his own and with the help of a skilled therapist. Callum understands his mental issues, and is working through them the best he can.

Callum was born to Marriot and Johnny Walker on September 27th, he was their 3rd child and their 2nd boy. Callum was just a normal baby and toddler, he was happy and curious and always exploring and learning new things. He was just an average boy until he started showing signs of something else magical.

Once Callum started first grade his smarts began to show and he breezed by the homework. He ended up skipping two grades and was way above his grade level.

His parents were thrilled to know that their son was a genius, but Callum wasn't. Because of this a lot of pressure was put on Callum to be the best student and always get perfect grades, he was held at such a high standard that he was stressed to the core way too bad for a child his age.

Up until Callum got his Hogwarts letter, he was quiet and reserved. He never spoke unless talking to his parents or answering a question in class because he was too scared to mess up the perfect image that everyone had of him. He was like a model, and if he messed up he was scared his whole world would be ruined.

When he got his Hogwarts letter he couldn't have been happier to escape his world, and Hogwarts was like a safe haven for him during his first year. Because of this, he lacked in his schoolwork and was more laidback and happy. But his parents weren't happy, and when he went back home he was not welcomed with open arms.

His parents weren't loving and kind to Callum, they demanded that he study all during his break and work to get his grades back up. It wasn't hard for Callum, but his parents wouldn't believe him when he was done within an hour. His home had turned into a prison and his parents had turned into dictators, but there was nothing Callum could do.

The only thing he could do was escape, he would run away from home for weeks or days on end. And it was easy with his abilities to hide, no one could recognize him and he could be free and happy. It was a two-edged sword though, since whenever he escaped he always had to go back home only to be met with punishment and minor beatings.

Now in his third year at Hogwarts, he's praying that he can leave his home. He doesn't want to remain there anymore, he doesn't want to be beaten into the perfect star child. He just wants his freedom and happiness, but how can a thirteen-year-old boy achieve such a thing?

During the summer after his third year, Callum ended up being adopted by Aubree Dane. His mother had finally been charged with child abuse as was his father, thanks to an encounter at the Hogsmeade Post Office with Aubree who reported it to the Aurors.

Callum is very happy with Aubree, and is looking forward to the rest of his life and Hogwarts career. He's excited for the things that he'll be exposed to and the new experiences he'll have. Unfortunately, not all of his experiences have been good and there's been some scarring moments. But, Callum won't deny the fact that there has been a lot of happy moments as well.

Callum started dating Sofie during his fifth year at Hogwarts and has been happy with her ever since. Sure, the two of them have had small disagreements but nothing that couldn't be fixed. They both exchanged promise rings during the summer before his sixth year, and he plans to spend the rest of his life with her.

During the summer of his sixth year, his biological mother showed up at his home after getting out of prison which really shook him up. It didn't help after returning from an American trip that his mother tried to kidnap him, causing his mental state to shatter and sending him into constant therapy until Hogwarts begins.

WIP
Add a photo to this gallery
Retrieved from "https://dumbledoresarmyroleplay.fandom.com/wiki/Callum_Dane?oldid=1075675"
Community content is available under CC-BY-SA unless otherwise noted.