Start a Wiki
This Character Belongs To Kayle
History
Carissa Eleanor and Daniel Robert were born on June 11th, the first children of a rich upper-class muggle couple. They had a comfortable life up until the age of six, being just the two of them and generally just being spoiled. That was until the car crash, which they all survived, albeit with injuries that varied in severity. Daniel acquired a brain abscess from it, which soon developed into Hydrocephalus. Carissa had to continue attending school whilst Daniel was forced to stay at home or in hospital for the majority of that time. Through this, she became very protective of him, and even though he's recovered now, she still is. Old habits die hard.

In the midst of her brother's illness, her parents started arguing. And arguing. Eventually they filed a divorce, and Carissa only stayed with her mother because that's where Daniel was, and while she was closer with her father her brother was more important, even if twin telepathy doesn't exist. They stayed in touch for a while, but then their father just stopped turning up for days out and such, and they lost contact all together.

Her mother remarried, and Carissa doesn't mind the guy - he's never given her a reason to hate him, and he'll play games with her, at least - but she knows that Daniel dislikes him and she can see why. For once, she gets the attention from an adult, and she believes that Daniel's just jealous.

When they received their Hogwarts letters, no-one in the family could believe it. Of course, her mother only cared about the possible dangers of it for Daniel - not that Carissa is bitter, exactly. She understands the reasoning. But she's been told to look after him at school, and she will.

Carissa's life has turned for the worst. During her Third Year, her mother fell ill with cancer, and although it led the twins to get closer together than before, it tore them both apart, and led to several fights, with Carissa even telling Daniel that it should be him dying, not their mother.

Carissa's Fourth Year shined some light on her situation, as she met Nikolai Dalton, and instantly connected with him, and just weeks later, they attended the Yule Ball together. Carissa thinks knows Nikolai is perfect, and she wishes they would just be together already, but she won't admit that, to anybody. However, right at the end of the year, she received the news that her mother had died, which meant they had to move in with their father, the person who just left them, but they remained at their stepfather's until their father was ready to take them in.
Personality 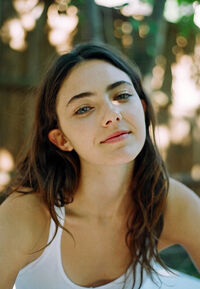 Carissa tends to be a brat, but she isn't really on purpose. She likes to think she's a nice person, treating everyone nicely, when she isn't. She's aware of this, though, and she's trying to fix it, to no real avail. If you're rude to her, or do something she doesn't like, she just won't like you and there's no going back to that, sorry for you. If you're nice enough though, and you care enough to see through her tough exterior, you see she's much nicer underneath everything and even rather fragile. Other than that, Carissa is really intelligent, hence the reason why she's a Ravenclaw, and is full of languages and math and chemistry facts and formulas, it's mad. She'll tell you it's a shame they don't teach that stuff at Hogwarts, and it's her goal to bring some sense of it there at some point, and she'll stand firmer than ever on it.
Relationships

Trivia
*Carissa is an ISTJ (63% Introvert over Extrovert, 69% Sensing over Intuitive, 80% Thinking over Feeling, 74% Judging over Perceiving).
*Carissa's hobbies lie between writing and chemistry/mathematics.
*Carissa speaks English, Latin, Pig Latin, and Klingon.
*Carissa was a Prefect in her Fifth Year.
*Carissa's OWLs scores go as follows: O's in Charms, Transfiguration, History of Magic, and Muggle Studies, E's in Herbology, Potions, and Care of Magical Creatures, and A's in Defense Against the Dark Arts and Astronomy.

credit goes to kayle for the code and page.
Retrieved from "https://dumbledoresarmyroleplay.fandom.com/wiki/Carissa_Porter?oldid=963949"
Community content is available under CC-BY-SA unless otherwise noted.