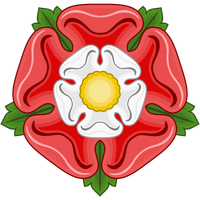 The House of Tudor is currently amongst the highest standing houses in the aristocratic class, favored and sought out by many. Descended from the child born as result of the secret marriage between Queen Elizabeth I and Robert Dudley, 1st Earl of Leicester, the House of Tudor is currently one of, if not the most powerful family within the wizarding noble class, having a valid claim to the throne of the Magical United Kingdom of Great Britain and Northern Ireland. Furthermore, House of Tudor is, in unison with House Boleyn, the only house to be awarded titles of Lords and Ladies, making them all the more powerful and respectable among the aristocracy.

L
Retrieved from "https://dumbledoresarmyroleplay.fandom.com/wiki/Category:House_of_Tudor?oldid=1096594"
Community content is available under CC-BY-SA unless otherwise noted.