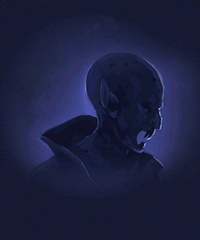 A vampire is a magical humanoid that is famed for biting people on the neck and sucking their blood. They are part of the family of beings known as the Living Dead.