Oldest of five, and protector of them all, Charity Alice stepped into a mature older sibling role at a young age, and just kept with it. Not all of her siblings enjoyed her mothering nature, but Charity did what she could to make her siblings, and her parents, happy.

Charity grew up dreaming of Hogwarts. Both her parents were Prefects, (though neither made Head Boy/Girl) and scored high marks on OWLS and NEWTS. Charity's early signs of magic started around the age of 6, but she was so excited, she couldn't replicate them for her parents. This doubt frustrated her, but her parents assured her that her magic would continue to grow, and grow it did.

Charity made many friends throughout her days at Hogwarts castle, though none were closer than Sadie Grey. In her fourth year, Charity started dating, made a few mistakes, but by her fifth year, she got her head on straight (just in time for OWLs) and started dating Theodore Knight. At the forefront of S.P.E.W together, the couple's love grew. When Theo graduated, the two broke up, realizing they were following different paths. Then, Theo took a job that sent him abroad and Charity realized she needed to focus on herself, and her studies. She made sure that in her seventh year, as Head Girl, that she would make the marks she needed to follow her dreams of becoming a Healer. Shortly before her graduation, Charity found herself on the bad side of Kedric Woodhouse. Their confrontation led to his expulsion.

The summer directly after graduation, Charity took her life into her hands, filled out the paper work, and was hired as a Healer-in-Training at St. Mungo's. When she was in the process of filling out her application, Charity met the man who would become her husband, Ash Prince. Taken in by his kind and hard-working nature, the two hit it off, and became an official couple a few months later. The pair long-distance dated for a year, which was difficult at times, but they made it work. Charity moved out of her parents home, and got an apartment for herself... in the same building that Kedric happened to be living in. Kedric had made it clear that he held Charity responsible for his life's misery, and though Charity had her reservations, Ash had told her it would be okay, and so she moved in,
Ash proposed on a summer visit to Greece, at his family's villa. The long-distance engagement was just as difficult, but Charity did her best to focus on the planning. On Valentine's Day, 2025, Charity got the worst news, possibly of her life. After returning home from a romantic dinner with Ash, Charity was informed that her parents had passed away in a tragic Splinching accident. Charity did her best to hold the family together, while still determined not to post-pone her wedding date, and Ash and Charity were married on June 19, 2025.

Charity and Ash began starting their family not long after they were married. Aria was born December 17, 2027 and their son Jonathan on April 5, 2030. It didn't take Charity too much time to figure out that being a parent to two toddlers, and working full time at St. Mungo's was getting to be too much, and she ended her career there to be a full-time Mum to her children when Jonathan was two. She and Ash have been trying for another child... but so far they've been unsuccessful.

Charity really values family, tradition, and surrounding herself with happy friends and family. A fierce protector of those closest to her, Charity was always likened to a "mother hen" in her youth. 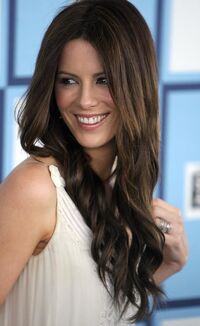 Dressed in comfortable clothing always, Charity is known to be running around in jeans and a sweatshirt. She knows how to clean up nicely, but prefers function to fashion, and certainly would rather be comfortable than trendy.

She's slightly taller than average, and has brown hair and kind brown eyes. Her face claim is Kate Beckinsale.

*Alice: means "Of a noble kin"

*Her Myers-Briggs letters are ESFJ.

*She was a Prefect in her 6th year, and Head Girl in her 7th.
Retrieved from "https://dumbledoresarmyroleplay.fandom.com/wiki/Charity_Prince?oldid=1063054"
Community content is available under CC-BY-SA unless otherwise noted.