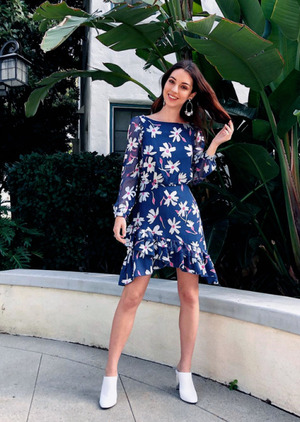 For as long as Charlotte can remember, the word reputation has been ingrained in her mind. Truth be told, it's not something she's had to struggle with. She is, suffice to say, the definition of a princess. No, really, you'd look it up in the dictionary and you'd see a picture of her, without a doubt. She's prim and proper and you'll never see her with even a hair out of place. Charlotte is the embodiment of perfection, and she acknowledges it.

Despite her strict upbringing, she's come to embrace who she is and what her role is in the magical society. She has long since accepted there are many things expected from her, most notably during her interactions with the commoners and appearances at public affairs. Every bit of her is scrutinized endlessly - her movements, her posture, her smiles, her behavior. All of it. And though hard it may have been at first, she grew into it quite well.

All she does, she does for the crown. The charisma she publicly exhibits is the same that manifests in private affairs, with her family and closest friends. Unsurprisingly, Charlotte has a big heart full of compassion. She's trustworthy and loyal even today, though it extends to her people and obligations towards the Crown before it does to friends, given it's under the right circumstances. She was raised a thoughtful, humble, friendly young girl, whcih are traits that she has learned to keep throughout the years.

If you ever need a modern fairytale to restore your belief in love, the story of Prince Arthur of Wales and Maud Weasley is one to know. They met at Hogwarts, in the first potions class of their first year, and clicked immediately. For years afterwards they were the subject of hundreds of "will they won't they" speculation in all the tabloids, until they finally began a relationship. Magical media always loved their story and when their engagement was announced the media had a field day. Their wedding, for one, is said to be the most-viewed in all of magical history. Picture this: the strictly brought up, straight-laced crown prince, marrying the carefree commoner who captured his heart.

It wasn't long until they started having children: first Alfred, then Charlotte, then Helena, and finally Richard. Arthur is a strict but loving father, concerned always with appearances and stressing the importance of protocol. These four are, after all, 2nd to 5th in line, and they have to act as such. Maud, however, is considerably more relaxed, perhaps because of the controlled chaos that was her own upbringing.

Throughout her childhood, Princess Charlotte relished in the comfort of her family's closeness, and always found it to be her happy place whenever she made public appearances. Likewise, she often found comfort in the trips her mother organized for her family. You see, Princess Maud of Wales is of the opinion that, as magical royalty, her children need to have a wide knowledge of both wizarding and muggle cultures. Therefore, she's been taking them on daytrips to typical muggle places ever since they were small. Though often ambushed by paparazzi, these trips meant the world to Charlotte as a little girl. To this day, she likes to think that's where her story begins - where she began to transform into who she is today.

From a young age, it was obvious Charlotte would be a woman apt to hold the title of third in line. She was always trying to get involved in public affairs, and often followed rules to a t - whenever she didn't, it was undoubtedly under the influence of one of her siblings, maybe even cousins. Even her first sign of magic, at the meek age of six, was as prim and proper as she was, having fixed the stitches in the dress she wore to one of her cousins' baptisms. This sign of magic ensured she'd retain her position in the line of succession to the throne, at least until Albert reproduced. She reaped of many other benefits, including endless bouts of affection from the public, being dotted on by her proud parents, and securing entrance to both the Wizarding Academy of Dramatic Arts, and later Hogwarts School of Witchcraft and Wizardry.

At the age of eleven, rather than beginning her education at Hogwarts School, she showed her first sign of rebellion, which in all fairness... cannot be classified as even that. Even as a young girl, Charlotte exhibited talents that were once so appreciated but had since nearly run into extinction among the royals. She had a passion for music, and often expressed herself through dance. It was usually ball, and ballet, and she had the talent. Likewise, she was well-versed with classical instruments, though none like the piano and the violin. While it wasn't enough to warrant attending WADA, her passion for theatre certainly was.

When the prospect of Charlotte attending WADA was brought up, Prince Arthur was initially vehemently against it. They were royals, and needless to say, it wasn't the ideal school for a princess - let alone the one third in line - to attend. Nonetheless, he and Maud were able to reach a compromise. She was considerably more laidback than her husband, and wanted to ensure her children had a healthy balance between their royal duties and their personal lives. Their childhood. It was a bit of them she felt was crucial to protect for as long as they could. Thus, she set off for the academy, attending day classes and returning to the palace at the end of it. This gave some leeway for her to continue to attend events, representing her siblings when they were all off at Hogwarts.

As part of the compromise, Princess Charlotte's last year at WADA was her fourth year of education. Given the cruciality of OWLs, her fifth year was going to be massively important - important enough to have to cover all the bases at Hogwarts. Thus, her transfer was submit and approved, making Charlotte a Hogwarts student. Like at WADA, she thrived at Hogwarts, always achieving the highest marks. Though not a know it all by any means, she was well off in the school. She worked hard to stay on top of things, which ironically enough, is how she ended up meeting the man that would in due time become her husband: Theodore Spencer. He was another student in her house and year who became her 'study buddy' during NEWTs. Their relationship evolved, however, and despite her vow of celibacy, she ended up sleeping with him on their third date after a considerable amount of alcohol consumption.

To this day, Charlotte holds the reason why she and her family's reputation went by unscathed was because of how quick the reaction time was. They were quick and efficient in planning for their wedding ceremony, as per damage control, and were crowned Duchess and Duke of Cambridge on the December 17, 2037. While many suspected something was awry, especially with her pregnancy being announced so soon afterwards, nobody really connected the dots. Following their wedding, they discovered Charlotte was expecting twins: a boy and girl. They were quick to decide on names, Caspian Augustus Philip and Daisy Ophelia Willow respectively, and found themselves excited by their children's fast-approaching birth. What they didn't anticipate, however, was delivering a stillborn baby girl rather than their healthy little Princess Daisy. This essentially broke the duo.

Nobody knew where they had gone. One day they'd been at the funeral with little Caspian, and the other they had disappeared, just like that. Unbeknownst to the public, they were at Greece, in the same place they had their honeymoon and found out they were expecting twins. It was, lo and behold, where they felt most at peace with themselves. It felt, there, like Daisy was with them. But they recognized they couldn't stay there forever, hence why they ultimately made the decision to return to Scotland after almost a year of being outside the country. It was time to return home.

Retrieved from "https://dumbledoresarmyroleplay.fandom.com/wiki/Charlotte,_Duchess_of_Cambridge?oldid=1080526"
Community content is available under CC-BY-SA unless otherwise noted.