Really, is it that hard to just walk away?

This Character Belongs To Lana

Clarice: is of Latin origin, and means "fame".

Lissar: is from the novel Deerskin.

Clarice Lissar Saduntytär née Elwyn was born to two utterly normal Muggles, Bonnie Elwyn née Johnson and Robert Elwyn, on the 14th March. She grew up normally until age seven, when her father was killed by a group of blood supremacists in front of her, thus making her hate blood supremacists with a passion.

Aged 11, she was sent her Hogwarts letter and sorted into Hufflepuff, before being sent as a transfer to Durmstrang during her fifth year. While at Durmstrang, she met Willem Saduntytär, and after six years of dating, they got married in Hammerfest, Norway, and now live together in London.

Clarice is quite headstrong and self-reliant, tending to count on herself, although is also kind to most. She hates most blood supremacists, claiming that they are "wicked and heartless and vain", and is not afraid to stand up against them. 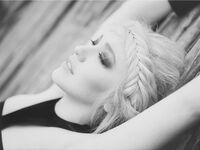 Retrieved from "https://dumbledoresarmyroleplay.fandom.com/wiki/Clarice_Saduntyt%C3%A4r?oldid=963964"
Community content is available under CC-BY-SA unless otherwise noted.