Start a Wiki
Inactive
This user/character is inactive for the following reason: He has assumed the face of another to avoid detection as he infiltrates various wizarding communities.
This user/character will return: Probably sometime soon... Please excuse the inactivity.

Bǐshǒu Fournier (known mononymously as Dagger) is a Pure-Blood wizard of French and Chinese descent. He is the son of the late Élie "Èyì" Shīfù and Thierry "Tèbié" Fournier.

The last of a dying breed. The heir to one of few rare, and pure, mixed race wizarding families- the French Chinese Fournier family. The long line of Dark magic within House Fournier began with Qaïs "Qiáng", Mylou "Mójiè" and "Jul" "Jùlèbù", all were skilled in Non-verbal magic during their time- Qiáng being one of the first to master the skill.

A boy was born to Élie "Èyì" Shīfù and Thierry "Tèbié" Fournier in late March. His parents had been born deaf, however, their son was born with perfect hearing. He did not begin speaking at the age children are expected to, even "late-talking children". He vocalized less than ten words, on any given day less than one word. In his childhood home no words were ever spoken. It was always with sign language the family communicated to one another. The extended Fournier family, close friends of Tèbié and Èyì, did communicate verbally, and both Tèbié and Èyì we able follow along exceedingly well. He was able to learn Chinese, French, and the English language. He clearly heard and comprehended it well. As a child he did not speak out of choice, it was weeks after his sixth birthday he finally uttered his first word. He thought he knew what magic was. He knew that his parents possessed it. He thought he understood due to his family inheritance, his place in the Fournier line he should possess it as well. His mother and father died because of him, because of the way his magic burst forth from him. Painful gusts of fire emanated from his hands incinerating everything in its path. He felt the heat, and the intense pressure building. He tried to run from it, he tried to warn them to stay where they were. Had they not chosen to follow him, if he could have gotten farther way, they might have lived.

A much younger child of seven, he was thrown into a few different orphanages after his parents death prior to his adoption into an upper class wizarding family. A couple by the name of; Mathilde and Ludovic Girard raised him as their own child. Their son grew envious of their power, both magical and political. Working as high-ranking Ministry officials in France, Ludovic and Mathilde were lifelong partners promised to one another at birth. They worked side by side as Obliviators, they were former Aurors with a well known reputation for having "tirelessly" worked their way up the sociopolitical hierarchy. They only adopted their son because it made husband, and wife appear to be a "family". Their son grew envious of their power, both magical and political. It made him spiteful of their deception. He felt even he could not see who they truly were. The "good former Aurors" or the "dark wizard Obliviators"? This way of thought, this itch that needed to be scratched, exposed him to his highly valued duality, and his undoubtedly warped mentality.

He was sent to school in the south of France where he immediately began pulling the occasional prank on his year mates and their friends. Stealing the odd knickknack from a shop or a classmate every single day, every single year. He would often hollow out books to carry his wares unnoticed - he was not serious with his crimes in his youth. It was for fun, for the excitement, for the rush. He remained non committal, and he was is rather difficult to trust despite his confident competence. Prior to graduation he returned to his birthplace in Zhejiang, China to reclaim the wealth, and prosperity awaiting him through the connections of his dark adoptive family.

He went on to pursue a life wrought with unspeakable hedonism. The depraved acts he would engage in willingly, he was subjected to memories he would later force himself to forget, and emotions he literally cut out of himself. He has been broken, and re-forged countless times. He has always been ruthless, and morbid. He has embraced a sense of malevolence, fallaciousness. He became a high class of black-marketeer His expertise. He has a knack for pilfering priceless items with minimalistic effort in exchange for the highest denomination, and inveterate art of killing for sport, then for profit. He dabbled in the Dark Arts, and criminal offences- a bit of poisoning here, an Imperiused untraceable assassination or mass murder there- as long as he was engaged in a thievery binge or murder spree he felt complete, he felt whole. He has spent years repressing various memories from his life.

The damage he has done to himself has caused a cerebral hemisphere lesion. As memories he sought to eradicate begin to resurface, he suffers a debilitating amount of pain mentally.

He denied his "calling", and he was named for it. Mathilde and Ludovic alerted French Aurors to the man known only as 'Dagger'. Abandoning his birth name, and his adoptive name to become known mononymously. The word-of-mouth reputation from informants; black market clients, and dealers has forced him to become something akin to a nomad. He roams the Earth working to collect, to begin, to continue, to grow his stock.

Dagger the Betrayer — Gentleman thief/Professional Killer has been pursued by the French Ministry and was forced to live off the grid so to speak. He had no choice but to play a role in someone else's life so that he could one day return to his own. He always chose to be a woman, a beautiful foreign woman was the most fun to him, it was the form in which he convinced many a man to marry him and provide for him while he gallivanted about spending someone else's hard earned money. Not that his former spouses earned any of it themselves. He did manage to rob them blind before leaving them to begin a new life with a different spouse as a completely different person. He considered it his profession, he also knew it was becoming a guilty pleasure. He could have quietly led a life off of the money he had without singling out and winning over another mark. The game was too much fun for him to stop but again he had to lay low, he did so by becoming Jewel.

He has never had an interest in conversation. He might make one think otherwise, but rarely does he ever truly "engage". He understands the value placed in social interaction by those who require it, and by those who survive on it. He has opinions, about everything. His opinions are the problem. No one else's matter. If he thinks something, so it must be. If he feels something, so it shall be. His narcissism quite possibly sprang from his independence, which lead to arrogance. Which lead to what he is.

He has made mistakes the he will never admit to, and he has had a myriad of triumphs he will never take credit for. He was not born a thief, a killer, a manipulator, a psychotic, a sociopath. Dagger has venom running through his veins, be it from the lies he believes or the way the darkness that he allows to corrupt, and eat away the heart he used to have.

Dagger has a diamond shaped face and he has inherited his flawless, slightly tanned skin complexion from his father. He has straight black hair, and naturally dark brown eyes which glowing an eerie Amber color when he has been weakened, a magical trait inherited from his mother's side of the family, the Fournier. He occasionally sports a mustache and/or beard. He has never liked either much, he has heard it said it adds to his villainy. Who would appreciate being seen as a villain without using words? The answer to that question is Dagger. 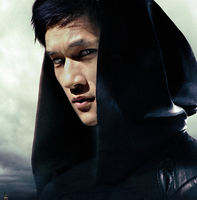 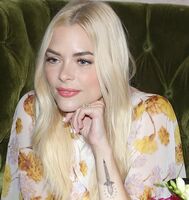 Retrieved from "https://dumbledoresarmyroleplay.fandom.com/wiki/Dagger_Fournier?oldid=624207"
Community content is available under CC-BY-SA unless otherwise noted.