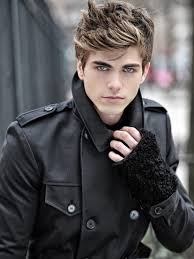 Desmond is a very kind and just guy. He's quite smart and loves reading. Desmond uses his words, not fists, to calm everyone. He loves children and hopes to have some of his own in the future. Des likes acting and tattooing, as well as singing. Desmond is sort of vain, though. He has a great relationship with his parents, Bride and Emrys Maddox, as well as his four siblings, Finley Maddox, Aeron Maddox, Alby Maddox, and Emyrs Maddox.

Desmond Idris Maddox was born to Bride and Emrys Maddox on a cold December 24th. He had three older siblings, Finley Maddox, Alby Maddox and Aeron Maddox. Desmond was quite a happy, just and kind child. He always helped his older siblings if the need was there and never turned his back to anyone. He was there to comfort Alby and Fin when they were bullied and even tried defending them, but being the little boy he was, he had no effect on the bullies.

When he was six, he and his four siblings as well as parents, moved to England in a town named Loughton. Everything was going great for Des. He had even shown his first magical sign! Desmond could make many things happen, thus creating curiosity in some people, fear in others and plain hate in other kids. Desmond got bullied, but he tried hiding it. He never told anybody and just bottles his feelings up. The problem was when that bottle of feelings broke. Vases broke, car windows cracked, things levitated and it simply affected those around him.

Desmond eventually began to defend himself as Finley, Alby and Aeron departed for Hogwarts. He had learned to defend himself, but in a kinder way. He used words, not fists. Desmond was into his studies, unlike his classmates who cared about sports. He was a smart boy who was good in making decisions. He used that as an advantage when he needed to defend himself, or his twin, came.

When he got his Hogwarts Letter, Desmond was ecstatic. Sure he was sad about leaving his parents, but he would be reunited with his siblings. They'd finally be together again. Desmond was then sorted into Hufflepuff, where his bullying lessened. He felt related to the other Hufflepuff's, as they all liked reading and using their wits for many things. Desmond made many friends on his Hogwarts team. Especially since he was on the Hufflepuff Quidditch Team.

Desmond tried spending as much time as he could with his siblings and even tried helping them if they got bullied, but then again, they were old enough to defend themselves. At age 17, he finished Hogwarts and began his real journey. He didn't search for a job and simply traveled across the world trying to find himself, which he did successfully. He found his love for acting and tattooing. It was surprising for him, but he liked doing tattoos and acting. He stayed on one country for about two or three months, but made the best of them.

When he turned 19, he came back to England. He reunited with his very much missed siblings and was surprised at how much they had changed the past two years. They had their moment to fame while he searched for himself. Now, now it was his moment of fame. His journey had just begun.

Desmond has a great relationship with his parents, Bride and Emrys Maddox, as well as his four older siblings, Aeron Maddox, Finley Maddox, Alby Maddox and Emyrs Maddox. He courted and now is currently happily married to Nikki and lives with her here. Recently Nikki and Des have begun expecting the birth of there first child

Retrieved from "https://dumbledoresarmyroleplay.fandom.com/wiki/Desmond_Maddox?oldid=596074"
Community content is available under CC-BY-SA unless otherwise noted.