Michelle Slawny was your typical all-American teenager. She had perfect hair, perfect friends, perfect grades... she was just missing the perfect boyfriend. She had a close group of friends growing up... but never a boyfriend. Growing up on the American east coast, Michelle was around a lot of Navy boys. With her parents having full trust in her... she would often sneak out at night to meet up with them, which inevitably led to flirting. And what's a sixteen-year-old girl to do when she meets a handsome, British Navy fellow? Eighteen-year-old Brandon James was that fellow. Everyone told the couple that this would never work-- Brandon was only stationed there two years, and at that point, she'd be headed off to college anyway. He could be sent anywhere. But young love doesn't pay attention to sense, or future planning. And when those two years were over, Michelle committed her first overt act of rebellion-- she decided to elope with Brandon and move overseas with him, to Britain, where Brandon would be placed with the British Royal Navy.

Their early marriage life wasn't the easiest, and was indeed quite rocky. Michelle considered leaving a few times-- and many of her old high school friends (who had gone into various branches of the Armed Forces themselves) encouraged her to come home, go to college, see sense. Maybe it was her determination to make it work and prove them wrong, maybe it was that Michelle and Brandon were destined to be together... but Michelle stayed. And the young couple worked through their marriage. When Michelle was twenty-two, and Brandon twenty-four, the James' became parents. They named their daughter Elizabeth, and their daughter proved to be a uniting force for the couple; a sign that the marriage was headed out to smoother waters. Four years later, Dustin followed.

When Dustin was about five, some strange things started happening. The little boy loved playing on the boats with Daddy... but when he got overexcited, or scared, odd things occurred. Ropes would get knotted, the sails would go up and down, anchors would rise and drop and all without warning. Brandon was clearly troubled by it, and by the time Dustin was seven, he wasn't allowed on the boats anymore. This was confusing and discouraging to Dustin, who idolized his father. Staying off the boats didn't deter these random, odd occurrences-- and even Elizabeth was starting to ignore Dustin out of fear whenever it would happen. When Dustin was eleven, someone from the Ministry of Magic showed up, explained everything to the family, and Dustin found himself on the way to Hogwarts School for Witchcraft and Wizardry.

Dustin is a fairly happy-go-lucky kid, now that the magic thing has been explained. He takes after his father's Navy values, and is a bit conservative in his views. He believes the man is the man of the house, and that a household should be run like a tight ship, with everyone in their place, and everyone helping out. He is steadfastly loyal to people, and if he's been betrayed he takes it very personally. You don't want to cross Dustin. He has a bit of a short temper, which he's trying to work on, but it's hard. He's also got a pretty good read on people. 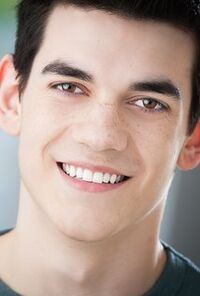 Dustin takes after his father's personality, but he looks just like his mother. Dark hair, dark eyes... he's a bit taller and a bit skinny for his age. He dresses well, and likes to do so. His face claim is Cainan Wiebe.

*James: "He who supplanted"

*His MBTI is ESFJ
Retrieved from "https://dumbledoresarmyroleplay.fandom.com/wiki/Dustin_James?oldid=862170"
Community content is available under CC-BY-SA unless otherwise noted.