Eden likes to think of herself as having a much stronger and respectable work ethic than any Lestrange has had in a very long time. Even if she isn’t one legally, it’s where her Belfrey heritage comes in. She is relentless in her pursuit to do better, to be better, not just in her work environment but in every aspect of her life. Her sisters often claim her to be a workaholic, but she just likes to see it as making sure things get done right. How can she expect to do well in anything if she can’t rely on herself? Putting her stubborn tendencies aside, Eden has also always strived to be more open-minded than everyone that’s come before her. With her job, she recognizes the times will always be changing and calling for new, more befitting ways to address the country’s needs, so she’s tried to adopt that mentality with the rest of her life. For someone who’s as wound-up about perfection as Eden, it’s proven to be a bit of a struggle, but she’s proud of the progress she’s made so far. It’s not to say she’s become someone capable of adapting quickly and accepting change like it’s nothing, but she doesn’t struggle in the same ways she used to.

“Oh, how the mighty have fallen.”
Eden has clear memories of her childhood, when her father tucked her into bed and told her stories of her villainous mother. Magdalena Lestrange was no ordinary woman; she was a woman born into the broken remnants of a disgraced house, with a palpable envy towards every man and woman who carried a respected name. She was a disturbed woman who held little regard towards the wellbeing of others, and often prioritized her social status. She exploited what little friendships she could make and whichever familial connections she had to other Sacred 28 families that could be in at least a slightly better standing than she and the rest of the Lestranges. Her father was a murderer, her mother one of his victims, and her brothers didn’t look to be headed down a path of complete sanity. This, however, didn’t stop her pursuit of living an opulent life. One that women dreamed of having and men were proud to offer. Her aspirations were limited to becoming powerful and wealthy, and the center of everyone’s attention. She didn’t care for anything else, and eventually, when she found her success in the shape of one Ernest Longbottom, she made it abundantly clear. With him, she had one child: a daughter named Florence. For all it was worth, Ernest was beginning to see Magdalena for who she truly was: a power-hungry thief with little regard for the safety of others, including her own child. She was abusive, in all senses, and he refused to take the worst of it solely because he was the father of her child. The one who would most likely inherit the Lestrange and Longbottom fortunes. But Magdalena was wittier than he, and faster, too. Ernest never made it out the door of the Lestrange Manor alive.

Her father was a skilled man, and it was no surprise he was able to get away with the murder of his beloved daughter’s allegedly demented husband. Magdalena had fed him lies, had warped her husband’s image in her father’s eyes, and it had all paid off. All it had taken was a mention of how he had horribly hurt her and her darling little girl, and her father took care of her little problem. It was her belief that, though the Longbottoms were a lot more respected than her family, it was a humiliation she had to marry into them. She was a Lestrange. A pure-blooded, powerful witch who shouldn’t have to marry blood traitors to receive the respect she believed she deserved. But she was desperate, and made the same mistake in marrying Edison Belfrey. Don’t get her wrong, she was a lot more comfortable marrying him, as he was wealthy, gorgeous, hailed from a respectable family, and was by no means a blood traitor. He knew his place, and it was worth recognizing. But alas, she was incapable of feeling anything other than thirst for more. More power, more fame, more money, more attention. Nothing would ever satisfy her; likely not even marrying into the royal family. But still, Ernest fell for her. He was lucky he found his bearings much quicker than Ernest did, and was able to outwit her, because had he wanted a night longer, he would have died at her own hands. To this day, he makes it abundantly clear not even Eden Estelle - his own flesh and blood - was worth the “suffering” he endured during his short-lived marriage to Magdalena. After Magdalena disappeared and the aurors had officially declared her dead, even with no body, Edison remarried. He found Genevieve Rosier, someone he truly cared about and who wasn’t a mentally challenged woman like Magdalena had been. With her, he had his daughter Luka Belfrey.

Now, if you ask Eden, she’ll be quick to tell you Luka had the childhood she always dreamed of. Edison didn’t respect her, saw her and her older sister Florence as but a reminder of Magdalena. He had made several attempts to give them both up, but he knew the backlash would be intense and that kept him at bay. So what he did instead was he sent them abroad, not giving them the same privilege Luka received of being able to study from the Belfrey Estate with their plethora of cousins. Eden was an understanding child, and though it hurt, she persevered and thrived studying in California. She was a good child, even if her dad couldn’t see it, and every day she woke up wanting to make someone - usually her older sister - proud. They couldn’t spend time together, being in two different schools, but they exchanged letters frequently. They knew more about each other than she believed their own father did. Eden had many friends and was involved in as many extracurriculars as she could, and that didn’t change even when her magic began to manifest come age eight. She knew what was happening, and it didn’t hurt that one of the teachers was a squib. It was easier for her to make sure she didn’t accidentally make it snow in the bathroom again, like the first time her magic made itself known. She did have to talk with her father several times, because as little as she liked to admit it, she needed his guidance. She needed to know how to control her powers more effectively. This continued all the way until she was eleven and left Timber Creek Academy for Hogwarts School. At Hogwarts, she was sorted into Slytherin for her ambition and willingness to do anything to achieve her goals. It was a little uncomfortable the first few weeks, as it had been a while since Hogwarts saw any Lestranges grace their halls, and not everyone was able to keep their thoughts to themselves about her family.

In her third and fourth years, Eden was lucky enough to be sent abroad to study as an international exchange student in Ilvermorny School. She was a proud Horned Serpent who excelled in the new environment. She didn’t play any sports, but was involved extensively with many of the clubs there were to offer, including the school paper and student government (standing in for the exchange students in the Senate). She was a Lestrange, but because not many were aware of who they were, they didn’t look at her in fear or disgust. It was a welcomed change, and it wasn’t enough to say Eden fell in love with the school and the country it was in. She loved the tiny village that paralleled the school, and how open they were to living with muggles. It left her with a heavy heart when she had to return to Hogwarts for her final year of OWLs and for her NEWTs. The only thing that served as some comfort was being prefect for her fifth and sixth years, and Head Girl for her seventh. She interned at the Ministry of Magic during those summers, too, working in the International Magical Cooperation department under employees of the different subdepartments. She enjoyed her tenure there, and was quick to realize that’s where she wanted to work. So as soon as she graduated, she applied for a role within the IMC, and was quickly hired to work at the International Magical Trading Standards Body, where she worked for a year and a half, but eventually found herself moving to the United States. It was something she had dreamt of doing for a long time, even if it was a temporary thing. She was awarded citizenship through naturalization (a process that moves much quicker when working through MACUSA) and soon found a job within MACUSA’s own office of law. She wanted to learn the ins and outs of how they worked, and was for the better part successful. By the time she decided to transfer and work at the British International Magical Office of Law, she felt she was a lot more knowledgeable and competent at her dream job. She worked there from ages 23 to 25, writing laws and advising Wizengamot for many cases. She was later moved to hold one of the ICW British seats for a year, being the most knowledgeable in the office about the laws of her country, but was appointed head of the International Magical Office of Law by the then-department head. She’s 27 now and hoping that, with her experience, she can become the next Head of International Magical Cooperation.

Given [ Eden ]Possibly from Hebrew עֵדֶן ('eden) meaning "pleasure, delight", or perhaps derived from Sumerian. According to the Old Testament the Garden of Eden was the place where the first people, Adam and Eve, lived before they were expelled. Middle [ Estelle ]From an Old French name meaning "star", ultimately derived from Latin stella. It was rare in the English-speaking world in the Middle Ages, but it was revived in the 19th century, perhaps due to the character Estella Havisham in Charles Dickens' novel Great Expectations (1860). Surname [ Lestrange ]The name 'Lestrange' echoes the French phrase l'étrange, literally "the strange one", referring to Bellatrix's mental disturbance. In Old French, estrange means "foreigner". It may allude to English journalist Roger L'Estrange, who was known for opposing religious toleration and for being involved in plots against the government of William and Mary, similar to the Lestranges' intolerance about blood purity and involvement in the Death Eaters organization. 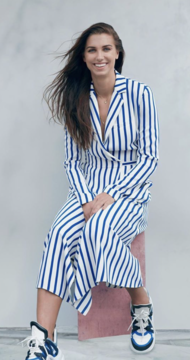 Retrieved from "https://dumbledoresarmyroleplay.fandom.com/wiki/Eden_Lestrange?oldid=1065763"
Community content is available under CC-BY-SA unless otherwise noted.