Seamus O'Reilly and Brigid Carey were an unlikely couple for their time. He worked under Father Flynn, his whole family expecting him to one day become a priest, and she worked as an assistant to the local seamstress just outside of Kilkenny, Ireland. Seamus assumed from the time he was twelve that he would one day succeed Father Flynn at the Catholic church, where Brigid and her family attended. When the dark-haired lass became increasingly difficult for Seamus to ignore, and with the blessing of Father Flynn, the couple were wed at just eighteen. Seamus' younger brother took his place in the church, helping the priest. Seamus and Brigid moved to a small house, not too far from where Brigid's family lived. The young couple continued attending the church, and were proud to declare themselves Irish Catholics, and looked forward to the day when they could boast a large family, like the one's they'd grown up in themselves. They had long lists of names for the numerous children they were expecting. Except that... they had difficulties conceiving.

Seamus and Brigid visited Father Flynn numerous times, who told the young couple to simply pray on it. That in God's time, their family would grow. Eventually it did, but the O'Reilly family is not nearly as large as the couple once expected, and it took them six years before Cilian O'Reilly was born. The new parents named him as such, because it meant "associated with the church," in hopes that he would be the first, in a long line of children to come. When Eilis was born just eleven months after her brother, things seemed to be looking up for the parents. That was when the miscarriages started. Three miscarriages later... Seamus and Brigid began to realize that perhaps, God had blessed them with two, and they should be satisfied with that.

Cilian and Eilis were brought up in their family's faith, and attended Catholic Mass every Sunday, diligently. Eilis learned from a young age to sit still when told, and to stand when told, and to behave like a perfect example. Her behavior began to become less exemplary when strange things begane to happen. When Eilis was six, and she was having a particularly rough time of sitting quietly in church, when she went up to take Communion, the wine vanished from the cup. In this particular instance, people passed it off, confused and didn't speak of it. The older Eilis got... the harder her moments of magic became to ignore. When she was eight, and Brigid wanted Eilis to learn to hem a skirt, Eilis refused, and the whole skirt went up in smoke. Frightened of their daughter's powers, they took her to Father Flynn. Flynn had no way to explain the going's on, and gave them the answer he always did: pray.

But the odd occurrences kept happening. Eilis wasn't frightened of them, but did want an explanation. And Father Flynn wasn't giving her answers. She tried the local library, where there were computers, and books... and Eilis found nothing. When Eilis turned eleven, her family was visited by the Ministry of Magic, and all was explained. Except that now her family feared that there were dark forces... Devilish forces... surrounding their family. It was a very difficult pill for Seamus and Brigid to swallow. Eilis didn't mind, in fact she was quite pleased to have an answer. To say she was troubled by her parents' and brother's response was an understatement. Eilis and Cilian had grown up close... with this news, he began to avoid her. When Eilis was whisked away on September first to head to this new place called Hogwarts... she couldn't help but wonder what new life awaited her. Part of her wanted to believe it would be wonderful, and she'd finally be accepted and get all the answers she'd ever dreamed of. But there was another part of her that wondered if her parents were sending her away to some religious place to suppress the darkness out of her.

Growing up in a conservative Irish Catholic family Eilis was taught that children were to be seen, and not heard. That they were to be a perfect picture of manners and obedience. Eilis can certainly be all of those things when called upon, but within her also lies a vivid imagination, a desire for knowledge, and to understand the world around her. She often questioned many things about the Catholic faith. She always did so in a respectful way-- never challenging, always curious. But she did sometimes have questions that her parents couldn't answer. She's respectful of her elders, but sometimes questions traditions, if they don't seem to be rooted in anything that can be concretely explained. She's a bit soft spoken, but has a big heart. 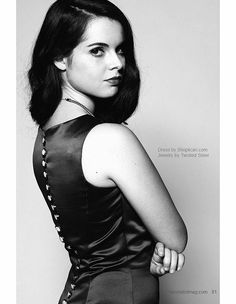 Eilis has brown hair that's usually got a gentle curl in it, brown eyes, and freckles that play across her fair skin in the summertime. There's always something of a smile that plays across her lips, and a curiosity in her eyes. She's fairly small-- both in size, and stature. Her face claim is Vanessa Marano.

*O'Reilly: Irish, "Son of the courageous one"

*Her MBTI is INFP, but her preference to P is mild.
Retrieved from "https://dumbledoresarmyroleplay.fandom.com/wiki/Eilis_O%27Reilly?oldid=1053064"
Community content is available under CC-BY-SA unless otherwise noted.