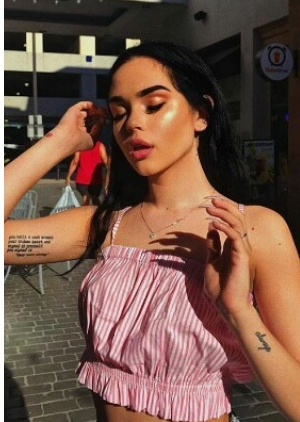 Someone won't truly get the real side of Elodie until she's decided their decently close. Although she's much of an extrovert and is always willing to engage in conversations, she doesn't let people into her close friend circle very often. She's the person to go a party and not know anyone... Yet doesn't even bother to get close with someone. She'll stick to small talk, dancing, and alcohol. If she and someone were to be firstly meeting, she'd definitely be as sweet as possible... And they'll know if she believes the two are close if she can casually be sassy or jokingly mean to them. There's also a teddy bear side to her that only close friends may ever see.

Being loyal has always been important to Elodie. She could never turn her back on a friend, and believes they would do the same. (This can also make Elodie naive at times, but she's not had that issue much in her life.) So, if a loved one or best friend needs help hiding a dead body, no questions asked and Elodie would do it. She's also really protective of people close to her, and doesn't care about getting into a little trouble to show bullies and assholes what's up. A little spell cast? Maybe throwing in a little punch? Well, it serves the dick right for being mean to Elodie's friend.

Although she tries to hide it, Elodie is really sensitive. She takes things to heart more often than not. She doesn't care what strangers think of her in the slightest. Hate her? Keeping hatin' then, Elodie doesn't give a damn. So, mean words from people like them aren't he ones that hurt. It's ones from people Elodie loves. Even if it's just criticism, she can't help herself and feel like she let someone down a little bit. And feeling like she let down someone she loves is the worst feeling.

No one would know who had taken the baby to the orphanage only a week after her birth. Just a young infant found right outside the Lil Bundles door. She was actually the child of a young witch who had only recently graduated Hogwarts, and had became pregnant after a messy night. Even the father was unknown. After not being able to take care of her baby - and being put to shame by all her family - the baby was anonymously taken to a place where she would be cared for properly... Even being adopted by a caring family that would take much more care than the unknown mother could.

This hope of being adopted into a happy family would actually come true when Elodie - a name she was given quite a while ago - was five. She was adopted by Rylan and Louie Sutcliffe, a married and pure-blooded couple. The Sutcliffes were never a very popularly known pure-blood family, usually most staying away from too much power. In fact, Louie and Rylan's jobs both had nothing to do with power or ministry. Rylan owned a small bookstore, while Louie himself was a writer. So, Elodie didn't grow up like some other pure-blooded children in families had... She didn't even know what blood status she was herself. As well as having four adopted siblings as well.

Elodie's first magical incident was something the family liked to laugh about often in the future. Her brothers, Florian and Daniel, had been picking on her for some stupid and forgettable reason. Though, Elodie genuinely still got hurt about it, and it wasn't long until Florian and Daniel seemed to have just stuck together. They couldn't separate until some time later, leading them all somewhat confused even if they did know about magic. Though, it did lead Elodie to receive a Hogwarts letter the summer before school.

Sorted into Hufflepuff, Elodie was unsure how she felt about it at first. She had done a decent amount of research, causing her to believe that Slytherin, Gryffindor, and even Ravenclaw seemed a lot more cool than Hufflepuff. Yet, Elodie soon realized the love for her house... And how it fit her quite well. Because Ravenclaw very much would not have suited her. Also in school, Elodie was decently popular. She made a crap ton of friends, went to parties (oof, alcohol was wild), and overall was living her best life. No, she wasn't the smartest of the class or the one who never got in trouble or even the one who always got in trouble... Yet, she still enjoyed her school years.

The only problem Elodie really ever had, was figuring out what she wanted to do in life after graduating school. In fact, she still didn't have a clue once she did graduate. So, instead of finding a job right away like a lot of her fellow classmates did, she took out the savings she had from school and traveled some for a year. Fun, right? Not the normal, yes, but it was something Elodie had always dreamed of doing. So, she traveled all over for a year. America, Germany, France, etc. It was just a year of Elodie being... Well, Elodie. She didn't work and have someone telling her stuff to do all the time (although budgets still could be hard at times without a job). It was definitely all fun, but it wasn't hard for Elodie to make the decision to come back. She had missed her family tons, and it seemed like she probably wanted to be as close as possible with them... With these new policies and everything. So, she found herself a cheap apartment while also looking for a small job as well.

Given [ Elodie ]Meaning foreign riches.
Middle [ May ]A month in spring.
Surname [ Sutcliffe ]A surname of Anglo-Saxon origin.

Retrieved from "https://dumbledoresarmyroleplay.fandom.com/wiki/Elodie_Sutcliffe?oldid=1000809"
Community content is available under CC-BY-SA unless otherwise noted.