Emmett Demetrius Selwyn was born July 21, 2005, making Demetrius and Isadora Selwyn parents for the first time. The pure-blooded couple from the Sacred Twenty-Eight family was thrilled to have a son who would carry on the Selwyn name and from the time he was born, Emmett was clearly always slightly more favored than his siblings, despite having two younger brothers. If he got in trouble at home, Emmett was always let off more easily than his siblings might have been.

Emmett was Sorted into Slytherin House, as his parents presumed he would be. Emmett had grown up knowing that his blood status made him privileged, and he believed that whole-heartedly. His deep belief in family before all, and using your name and cunning to get ahead made him an easy choice for silver and green.

Defense Against the Dark Arts was where he excelled most, with Herbology and Transfiguration coming in a close tie for second. Despite higher-than-average marks, Emmett knew that he would join up with his parents following graduation, living the luxurious life that his last name provided. Emmett moved back into Selwyn Manor after his seventh year finished, and his father has slowly been passing on some of his tasks and duties to him, and Evangeline.

Emmett, like the rest of his family, was in attendance the night of the Minister's attempted assassination. While the family wasn't aware of the plot against the Minister, and they had been at the Ball more for show than for truly believing in the cause, they left with some things to discuss. Demetrius, Isadora, and the children (though obviously Eric was in disagreement) all decided to support the cause of assassins. They weren't going to take a front-line approach, unless it proved necessary. Diluting pure-blood-- or any blood-- with creature's blood only weakened the magical race, after all.

Emmett exhibits a lot of the personality traits that one might expect from the oldest child, who was slightly favored, and grew up with money. He has a bit of a pompous attitude-- he knows that he could probably get away with murder in his own home, and his parents would probably look the other way. He also knows his siblings wouldn't get away with that, and it definitely fed into his ego growing up-- he often lorded his favoritism over his siblings, though now he's doing that a bit less.

He believes that pure-bloods are better than anyone else, and he grew up fiercely loyal to the Selwyn and Abbott names. He'd defend his siblings names, and honor, until his last breath. However, he also believes that Muggle-borns are inherently lesser-than (even though they might have admirable talents), and that part-creatures should just be done away with. Pure-blooded lines are the way to go, and that notion is what's making it difficult for him to find a girl. He's very picky, and wants only the best so that he can continue the family line (and feels it a burden to do so).

Emmett is a very entitled individual. He grew up with money, and has seen what power it can wield. He often gets frustrated when he doesn't get his way-- because usually any amount of money, or influence with his last name can get him whatever he wants. He's not above bribery, believing it can be a very useful tool-- and when you have as much money as he does... why not use it? 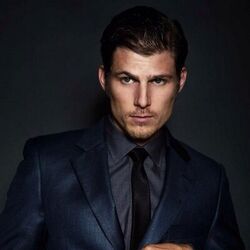 Emmett is tall, with blonde hair and blue eyes. His hair is always kept nice and neat, and his he wears clothes suggestive of his wealth and status. He usually has a bit of an intimidating force about him. His face claim is Travis Van Winkle.