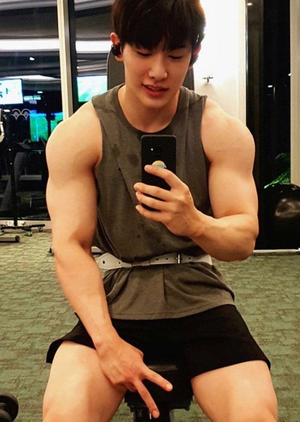 Felix, largely, is a very active and motivated individual. He has a love for exercise and a knack for motivating people as well as himself; a large contributing factor into him opening up a gym so that he could help other individuals obtain their goals like he himself had done. In a similar sense, Felix is an approachable and warmhearted individual; he has a large sense of compassion and is able to make friends quickly as a result. Whilst this is a large positive for the most part, it has led to instances in the past where he has been exploited for his hospitality and warmheartedness, though to move forward Felix has decided that they themselves were at fault, not him. Though this is largely true, it serves as a way for Felix to remain positive about himself and not turn into someone cold and distrusting; his boggart. Felix's sense of humour has a large range; he can laugh at infantile jokes and some of the darker parts of dark humour. Saying that, he prefers a tongue-in-cheek sarcasm as his preferred sense of delivery and enjoys making people laugh. It's always been said that Felix would be a great dinner party host and, if it weren't for a fear of someone being murdered at one following years of a love for detective shows and games, Felix would like to try his hand at one. Whilst not the smartest person in Lincliff, Felix does have a good grasp on common sense and is able to make people believe that he possesses a much greater deal of wisdom than he does. In reality, common sense paired with odd facts that just so happen to become useful in various situations had led to this. Don't get him wrong, he can hold his own in the academic sense but it's painfully obvious that his strengths are in hospitality and sports, not strict academics.

Felix, when it comes to the more negative emotions, is a rather emotionally-closed off person. As in, nobody truly knows how he reacts when put into situations of fear, anger and sadness. Whilst most overlook the obvious option of him working out and dissipating his anger that way, that is pretty much the truth. Having turned to working out as a way to deal with the grief and guilt of learning that he had ultimately caused his parents' deaths, muscle building and working out at the gym has largely become the best way for Felix to deal with most negative emotions. Although say that, Felix can be prone to outbursts of anger, but this is largely limited to shouting before removing himself from the situation. He has found that, due to having to come to terms with his parents' love that they had given him being the result of their fixation with magic and that their deaths were caused by this obsession on top of accepting that he didn't kill them intentionally, Felix has come to have a good sense of when certain emotions are rising. Subsequently, he largely feels that he's emotionless in that sense whereas, in reality, he has just perfected the technique of hiding them and not letting them bother him as much as they, perhaps, should. Ironically enough, despite having a good hold on his emotions, Felix is working on being more open with them and hopes that, one day, he'll be able to talk about his negative emotions without getting choked up or walking away - two things that largely happen as of now.

Isiah and Veronica Ryu were always aware of the wizarding world. Sure, they were muggles, but they knew those who possessed magical abilities and were delighted to hear that they had magical blood coursing through their veins. Beyond the initial disappointment that neither of them were the key to becoming a 'muggle-born;' they turned their attention to brushing up their knowledge of magic they best they could, firming believing that they'd have a magic child. Not realising they were serious, their wizarding friends indulged in their fascinations and taught them as much as they could without the two possessing any magic themselves. To most, it was admirable on how dedicated the two had gotten but some believed that the obsession was unhealthy; damaging.

The couple went on to have five sons; Derrick, Edgar, Xavier, Felix and Charles. With each born just one year apart, some speculated that the couple were doing their best to increase their chances of a magical child. They would've continued having more kids too, if it hadn't been for Charles' pregnancy being highly dangerous and giving Veronica the ultimatum of her life or the child's life during her next pregnancy. Though it was no secret the two wanted more, the two regarded it as a blessing in disguise as they could truly devout their time trying to see the telltale signs of magic. They had been given a rough age by their wizarding friends and paid close attention to their sons during this age period, largely ignoring them once they had left it.

Derrick, Edgar and Xavier all failed show any sign of magic, each being as muggle as they themselves were. They had all but written Felix off too until a few days before his ninth birthday, ensuring that he was a late bloomer with his magical experience. It had happened following an evening of being tormented by his brothers; Felix had gotten so upset and had little refuge to take in his parents' lack of defence of him that he kept himself quiet in the corner. Matching his emotions, presumably, the room became colder and frost could be seen on the windows. The only place that, by the end of it, held any warmth was where Felix was - indicating towards him being the cause of it. The 'freezing' of the room lasted only a few minutes but that was enough to make his parents excited for what the future had in store for their fourth-eldest. After getting confirmation from their wizarding friends that Felix was in fact a muggle-born, he quickly rose to being their favourite child.

At first, getting the extra attention and learning things about the wizarding world was fun; Felix seemed to flourish with this new identity that was beginning to form and many of his parents' wizarding friends commented that he was picking things up quickly for someone with a late magical experience. It seemed like a dream; previously things that were thought to be fake were revealed to be real and the attention from his parents after being somewhat starved for it was nice. Eventually, however, the overbearing nature of his parents led to Felix succumbing to emotions that would lead to him having a magical outburst. At the age of ten, anticipating his letter to Hogwarts, his parents and their obsession with Felix and his magic had hit an all time high. With conformation that he was their only magical son, Isiah and Veronica very rarely gave Felix time to himself, constantly getting him to learn magic. Though he had been overwhelmed for weeks at that point, he had bottled it up on the account of not wanting to offend his parents. However, when they backed him into a corner, quite literally, everything seemed to come crashing down on him. Felix never remembered what had happened; he saw a white light and then his parents on the floor writhing in pain before being whisked away by some of the wizarding friends and never returning to his home. At the time and for many years afterwards, Felix harboured no strong feelings over the situation as he was oblivious to the outcome; he had believed that his parents had survived and that being taken away was a natural part of all muggle-borns. As he got older and realised the truth of the situation, he became a little more unnerved over it, feeling guilty about how he killed his parents (inadvertently, but killing them nonetheless) and had been oblivious so for years to come. In any case, Felix was placed into Lil' Bundles and eventually attended Hogwarts.

Being sorted into Hufflepuff, Felix had a rather nondescript time at Hogwarts. He was an alright student who got decent grades, gave Quidditch a go in fifth year before devoting his time to being a part-time employee at Honeydukes where he worked at the weekends and during the holidays. Upon graduation, Felix seemed to have very little idea on where his life was to go. At first, he took a job as a PA for one of the lower heads at the Ministry before quitting and resuming his job at Honeydukes. Very recently, Felix has won the magic lottery and intends to open up a gym in Lincliff City, having believed that working out changed him from the scrawny teen he was before to the man that he is today.

WIP
Add a photo to this gallery
Retrieved from "https://dumbledoresarmyroleplay.fandom.com/wiki/Felix_Ryu?oldid=1041187"
Community content is available under CC-BY-SA unless otherwise noted.