Start a Wiki
Inactive
This user/character is inactive for the following reason: He is training with the INQT, prepping start as Chaser for the Catapults as long as they will have him.
This user/character will return: Probably not anytime soon... Please excuse the inactivity.

Finnbarr "Baz" Nevin is a Pure-Blood wizard of Irish and Scottish descent. He is the son of Torin Nevin, and Moreen Tully.

His father Torin played Junior qudditch with an under-17 team, and professional quidditch into adulthood. His mother was an investigative journalist doing an exposé on the gritty underbelly of quiddtich injuries, she called it Iron Balls. She was not popular within the mainstream writing community in the wizarding world. She did have a cult following in the idiosyncratic types. She met Torin while posing as a Healer with the Irish National Quidditch Team. She had met his a few times, and they had met outside of the stadium for drinks, and dinner more than once. He was knocked clean off his broom, falling through the air, during a particularly brutal practice. She intervened and the captain lost it. She was "fired" and kicked out of the stadium. It almost ruined her story, until Torin came out to console her. She saved his life, he was not about to let this angel get away without properly thanking her.

Baz was born into a hardcore qudditch fandom. His mother, his father, his grandparents. Each and everyone was a loyal Irish diehard. Be it Bats, Kestrels, or the Irish National team. A few members of the family were even blessed enough to play for the one of the aforementioned teams. In the past there have been Beaters, Keepers, and Seekers who adorned the family tree. Baz wanted to be the first to be called one of Ireland's superb Chasers. It was a childhood dream of his that would never fade into obscurity. He was not allowed to fly, by personal decree of his mother, until he was eleven. He put a kink in her plans, at eight years old his first sign of magic happened to be getting his broom up in the air. His mother tried to hide his broom, to no avail as he was willing to use a full size adult broom if he had to. Her forced her hand which required her to let him be taught to fly.

He was accepted to Hogwarts, and was known as a Hatstall. He wanted to go to Hufflepuff, all the pretty girls were there. The Hat, however, did not believe this to be the place for him. He was cut from the same cloth as the boys of Gryffindor, and he has hidden similarities with the boys of Slytherin as well. After being convinced that red and gold were his true colors Baz agreed, he spent the next several years sneaking out of the tower that housed his common room. He tried out for quidditch immediately, he knew that being Chaser was what he was meant to do, he did not make the team. He took his flying lessons seriously in his first year, and earned top marks, not that earning top marks in First Year Flying is hard. The following year he was chosen to be a starting Chaser for Gryffindor.

Something completely unexpected happened to him during his first game. He found out he was terrible at quidditch once he was finally given his chance to shine. Under the pressure of a win or loss that meant something he absolutely crumbled. He made all of the wrong decisions. He hogged the quaffle never making passes when he should have, and he constantly racked up fouls which meant points for the other team. But with each game he realized the flaws that obliterated what he thought of his supposed tactics. With the help of his fellow Chasers his accuracy greatly improved, and he gained some perspective on teamwork. His skill-level skyrocketed, while he did proceed to believe in himself immeasurably, he started to rely on his teammates. His new outlook on the game changed his outlook on life.

When he left Hogwarts he was a different sort of man than everyone believed the boy who entered would become. Back home in Ireland he did as expected, he took odd jobs until he could secure that which he knew would one day be his. There were open spots on the other Irish teams, he had his pick of positions with the Kestrals, and he would have a stupendous gig starting for the Bats. Neither of those teams were where he saw himself when he was a kid. It would have betrayed the little eight year old version of him that kicked at his brain every once in a while if he gave up. He pursed his dream after a few crumby jobs, and a short stint as a boxer he did what so many people never have the chance to do. He made a childhood dream come to fruition, he finally secured his position with the INQT.

He is afraid of nothing, and does not understand the fear people have of death. He wholeheartedly believes that every man, woman, and child in the universe should embrace "YOLO". He puts one hundred fifty percent of himself into every single thing that he does, he reserves a back up fifty percent for emergencies. He does not get embarrassed, and he pretends not to feel shame. He bottles up those negative feelings, mostly the ones that pertain to himself, and pushes them deep down somewhere dark. He makes jokes of most things, and he uses humor as a way to negating a feeling that could otherwise overwhelm a more sensitive personality type.

Baz has expressive eyes, and he tends to let them do a lot of the speaking for him. Although his heterochromia, does tend to distract people due to one of his glassy eyes being blue, and the other being green. His hair used to be quite light, hence his name Finnbarr meaning fair-haired, over the years it has gotten rather dark looking almost black, except for his scraggly beard and mustace. He has what his father calls a "stupid haircut", as most of his head is shaved except for the thick, curly, Mohawk down the center he sometimes has the nerve to put in a tiny top knot. He has four bands in varying size tattooed on both his left and his right forearms. He favored his dominant right side with the tattoo of an angel flying out of clouds over the right side of his chest, and a tribal design on his right calf. 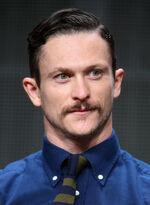 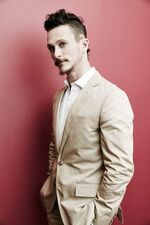 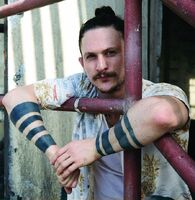 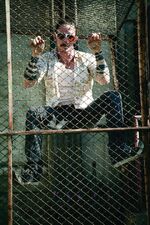 Retrieved from "https://dumbledoresarmyroleplay.fandom.com/wiki/Finnbarr_Nevin?oldid=964217"
Community content is available under CC-BY-SA unless otherwise noted.