Start a Wiki
Forum: Index > Sorting > Adrian Sebastian
Note: This topic has been unedited for 2195 days. It is considered archived - the discussion is over. Do not add to unless it really needs a response.

6) Give a description of your character's personality. Personality must be at least one paragraph long. Are you noble or sneaky? Arrogant or Humble? Anything about your character that might help the Sorting Hat decide.

He likes Nirvana and Kurt Cobain. His disposition is primarily solemn and weary, with perpetual bags under his eyes. There is tension between him and his mother, Stephanie He has even admitted to her that he hates her. His hatred for his mother was born out of her negligent parenting and the verbal abuse she constantly dealt him as a child in her drunken alcoholic rages. Despite her disapproval of his behavior, Stephanie frequently makes excuses for him, saying he is a sensitive boy.  This is true, as Louis appears to be apathetic at first, but he can quickly become enraged when someone or something he cares about is threatened. Louis often fantasized about murdering his friends in Hogwarts and takes pleasure in mocking people about what they did wrong, for example he once mocked his step-father about letting his wife and children died which lead to the stepfather losing control and stabbing a knife into Louis's hand.

7) Write about the history of your character. History must be at least two paragraphs long. How did they grow up? Is there an incident that made them the way they are? etc.

Louis was born to Jonah and Stephanie Sebastian, he had three other siblings, two older and one younger, but the older two had long moved out and made sure to lose contact with their parents so it was really just him and his younger sister. He is the only one not burdened by some sort of mental or physical defect as all siblings had some disability, his younger sister was born blind whilst he never bothered to find out his older sibling's disabilities but he remembers his mother saying one was a cripple. He was raised in a middle class house with a mother being a sociopath and his father was constantly cheating. When he was nine years old, his father disappeared and Stephanie simply said 'he abandoned us' but Stephanie did so only to spare his memory as in truth, Stephanie found him cheating on her with their maid and in anger Stephanie shot both of them and buried them in the back yard. But Stephanie, though loved her children dearly, was prone to alcohol and abused her children verbally especially when drinking and constantly struck Louis when he spoke back to her.

When he was ten he was in his class not really paying attention to the teacher but instead arguing with the kid next to him, what happened next he doesn't quite remember but what people described as the kid spontaneously bursting into flames but though he was questioned the police couldn't make Louis a suspect as he had nothing on him that could make the kid burst into flames, and a couple of months after that his letter to Hogwarts arrived.

In the summer of his Third year he came home to find that Stephanie has a boyfriend, a man named Harry, after some research Louis discovered that Harry's children and wife had died in flames just next door to them but it only took him an hours more research to find out the wife had set the room alight as she found out her husband, Harry, was divorcing her for Stephanie, this didn't disturb him but that night he confronted him about it at the dinner part and mocked him continuously about the thing and Harry lost his temper and dug the knife right into Louis's hand in anger. After the incident Stephanie made sure to kick Harry out and throw his bags into a pool of mud before helping Adrian with his wound and to this day he still has the long scar on his hand.

8) Write about your character's appearance. How do they look like? Are you planning on using a certain model for your character? If you already have a picture in mind, you can put it here! 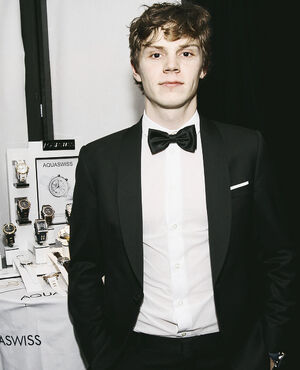 9) Are you Pure-Blood, Half-Blood or Muggle-Born? Do you have any notable magical relations?

10) Does your character have any special magical abilities? Or special abilities in general (photographic memory, etc.)? Is he or she of a different magical race, such as veela, vampire, werewolf or the likes? Part or half of that magical race counts!

11) What year is your character in?

:C) I should be able to participate at least some every day.

3. If your answer to the previous question is B, how many characters do you have? How many of them are "exotic"?

4. Please post your time zone in relation with the UTC time zone (ex. Eastern Standard Time is -4), but if you don't understand how to calculate that then please simply put the name of your time zone below.

Eva McKenna ~ Slytherin Quidditch Beater & Captain, Auror, The Girl With No Mistakes, The Lorell Corsair, The Golden Lady, Editor for the Daily Prophet, The Little Troublemaker

Retrieved from "https://dumbledoresarmyroleplay.fandom.com/wiki/Forum:Adrian_Sebastian?oldid=431938"
Community content is available under CC-BY-SA unless otherwise noted.