Start a Wiki
Forum: Index > Adult Sorting > Alessandro Leone
Note: This topic has been unedited for 710 days. It is considered archived - the discussion is over. Do not add to unless it really needs a response.

A. Please answer the following questions as elaborately as possible. (Remember, this part doesn't have to be filled out if it's an expansion character!)

Weakness:Push-over, oblivious when being used

2) Has your character's life played out the way they wanted? Have they achieved the goals they set out for their life? Why, or why not?

While he hasn't accomplished much, he is happy with how his life turned out and he'll be even happier when he finds a job.

3) What's their ideal way of spending a free day? Why so?

4) If your character could only keep 5 possessions, what would they be? Why?

A necklace his mom gave him(Keepsake), an old toy car (Another keepsake from his mother), His Wand (For obvious reasons), Candy bar (Cause they are life), Movie lion king (cause it's his favorite)

5) What one thing would your character change about the wizarding society? Why?

The view some wizards have on muggles and half-breeds

Alessandro Leone was born to a pure-blood wizard, Francesco Moretti, and a muggle, Alexia Leone. You could say that Alec, his preferred nickname, was a result of a one night stand between two fairly drunk individuals. Other wise, Alec's creation would have never even been an idea. You see, Francesco came from a family of pure-blood wizards and quite sadly, they were the type to look down upon half-blood and muggles. They deemed themselves better than anyone who had lesser magic in their blood and the idea of conceiving children with anything else besides another pure-blood wizard would be an abomination. In their eye’s and even his father’s, that’s what Alessandro was - an abomination. When Alexia found out about her pregnancy, she found a mean of contacting Francesco and he didn’t exactly react the way she wanted. While she didn’t expect a drunken one night stand to drop everything and raise a baby with her, she definitley didn’t expect him to pay her off and tell her to get an abortion. Alexia was disgusted at the idea and decided to take the money and disappear though, rather than get the abortion like Francesco wanted her to, she decided to carry the baby to term and raise it.

When Alek was born, he was raised lovingly by Alexia and they were pretty well off considering the amount of money the Moretti family had payed Alexia. It was their main source of income, in fact, Alexia still had her daily job but, the money was able to buy them a house and car and even a bit extra. Alek was happy with his mother and for the most part, had a pretty uneventful childhood. It was pretty basic. Learning to talk, walk, read, write, ride a bike. The life of a muggle family was like the most of the time. It wasn’t until Alek had turned 7 though that his world had turned dark and upside down.

It was actually the day of his birthday and the day had started off well. Alek’s mother brought him breakfast in bed, she let him cut school, and later on they’d head out and spend the day together. Alek never would have expect what was to come later on in the day though. As planned, the two got dress and made their way out into the city of new york. Before anything, the duo mad a stop at the post office so that Alexia could send something off and they’d be on there way. Alek was left sitting on one of the chairs as he waited for his mother when a strange looking man walked in. He didn't think much of the man until the stranger pulled out a guy and started yelling at the cashier. Everyone was terrified of course but, no one dared move. Everyone except for a scared little Alek who ran past the robber and to Alexia. Caught off guard and frantic, the man pointed his guy in the families direction and shot, thinking it might have been someone trying to be a hero. Alexia’s natural mother instincts kicked in and grabbed Alek and threw herself in front of the bullet, killing her.

Alek was splattered with the blood of his mother and left frozen as the man threatened to shoot anyone else who moved. Things were still for a moment and all Alek’s eye could focus on was the sense of his dead mother and her blood on his hands. After what seemed like forever, a hero in the room decided to raise up and catch the burglar off guard, wrestling with him and cause him to drop his gun. It dropped next to Alek’s feet and as a reflex, picked it up. Alek had no idea what was happening and before he knew it, he had shot the robber and killed him - dropping the gun just after and the police arriving.

From there, Alek was sent to live with his father - who had been forced to take him in by his own mother. Nothing would ever be the same again.

As the years went by, Alek slowly healed from the incident - acquiring a fear of blood and guns though. At the age of 9 he had his first magical experience, which made his father like him just a bit more. It wasn’t to special, al he did was stop a expensive object from shattering on the floor by making it levitate. At the age of 11 he was sent to hogwarts and sorted into hufflepuff where he went through all 7 years and graduated. After that he spent a lot of time bonding with his grandmother, who didn’t have the same views as the rest of the Moretti family, traveling. Now he’s back in england and plans to find a job so he doesn’t have to rely on his father forever.

Alessandro, who more commonly goes by Alec, is a very Gentle, kind and patient individuald with a very innocent view on the world. Rather than talking your ear off, he’d take the time to listen to ones problem and if possible help provide a solution. Always giving up his time to help a friend in need or even going as far as giving up his free time to volunteer. He’s genuinely kind like that and for a majority of the time, people love him because of it. It’s difficult not to love or even show anger towards Alec and if he feels as if someone dislikes him or is angry at him - he will become sad and at times beat himself up as though it was his fault. I guess you could say Alec is a bit of a push over and throughout his twenty-one years of living, people have definitely taken advantage of it. Of course, the young man is oblivious to it every time and continues to believe everyone has some good in them, no matter how much wrong they’ve done in their lives.

It’s the only way Alec can stay sane, by pretending the world isn’t full of rage, envy, betrayal, and everything else - even though deep down he knows it is. Yes, Maybe at times alec is a push over but, he isn’t stupid. He’s just seen his fair share of horrors in his lifetime to make him want to push aside all the negative things that dwell within our society and focus on the positive ones. Furthermore, Alec, which should be obvious by now, is not one to cause involve himself in confrontations. In fact, he’d rather avoid them all together and if possible, solve the situation in a civil manner - going to great length to try and make everyone happy.

Some might say Alec’s view for things is bad, opening himself up to getting nothing but hurt and used. On many occasions, this has been the case seeing as Alec put everyone's needs before his own and in some cases, even his health has faltered. This makes him happy though, no matter what anyone thinks. The happiness of his family and friends is the most important thing to him, and while he chooses to block out the dark parts of the world, he often makes it his job to block his loved ones from that same darkness. No matter the cost. 3) Are you Pure-Blood, Half-Blood or Muggle-Born? Do you have any notable magical relations? (Remember, you cannot be related to important Harry Potter characters!)

4) Does your character have any special magical abilities? Or special abilities in general (photographic memory, etc.)? Is he or she of a different magical race, such as Veela, Vampire, Werewolf or the like? Part or half of that magical race counts! (Remember, you cannot have one as your first two characters!) No 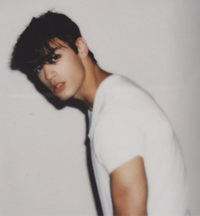 B. Select the option that best fits your character. (Remember, this part is only optional, for regular adults and expansion characters alike!)

1) Which type of spell is most useful?

A. A Complex Spell

B. A Spell Of Control

2) What is most important to you?

B. Getting your way.

3) What would you do if a teacher caught you cheating?

A. I'm the person people cheat off of.

B. I wouldn't get caught; I'm too slick.

C. I would deny the accusation until the teacher gives up.

D. I would 'fess up, apologize, and accept the consequences.

4) Which trait is most valuable?

5) What's the best way to get things done?

A. The right way, no matter how long it takes.

B. Trick someone else into doing the work for you.

C. Putting together a qualified team and completing the task efficiently.

D. Get some friends together and lead them in the task.

C. These do not affect what house you're sorted to, but everybody must answer them!

B. No, this is not my first character.

2) If your answer to the previous question is B, how many characters do you have? How many of them are "exotic" (of a different magical race/have a special ability)?

I have one normal character.

Time you enjoy wasting is not wasted time.

Retrieved from "https://dumbledoresarmyroleplay.fandom.com/wiki/Forum:Alessandro_Leone?oldid=971967"
Community content is available under CC-BY-SA unless otherwise noted.