Start a Wiki
Forum: Index > Sorting > Anastasia Delacroix
Note: This topic has been unedited for 1437 days. It is considered archived - the discussion is over. Do not add to unless it really needs a response.

1) Which type of spell is most useful?

2) What is most important to you?

3) What would you do if a teacher caught you cheating?

A. I'm the person people cheat off of.

B. I wouldn't get caught; I'm too slick.

C. I would deny the accusation until the teacher gives up.

D. I would 'fess up, apologize, and accept the consequences.

4) What matters most to your character?

5) What's the best way to get things done?

A. Putting together a qualified team and completing the task efficiently.

B. Trick someone else into doing the work for you.

C. Get some friends together and lead them in the task.

D. The right way, no matter how long it takes.

Anastasia can be selfish but that is just mainly because she finally feels free and independent from her brother. She hated being compared to him and enjoys her life much more although she is always getting herself in major trouble. She will always protect herself first above anyone else and gets bored rather easily (which is why she prefers the chase rather than the victory at the end). If betrayed she will kick butt and throw down. Anastasia is far from being a stickler from the rules and she does what she wants and is a bold person despite other's opinion on it. She has a strong spirit that is hard to break and she's highly stubborn.

Anastasia and Conner Delacroix were both born on the 6th of May in St. Mungo's Hospital. The day that that two blonde twins were born, everyone could tell that they were going to either going to be troublemakers or one of the strongest wizards man had ever seen. Born into a "pure" family, the house was always booming with magic, exhilaration, and ecstasy. There was no other family that could be more tight knit than the Delacroix's despite how huge their family was and how far the origins of the family could go. Without the toxicity of all the gossip and drama of the wizardinf world, the family seemed to be living a placid and tranquil life. Ignorance was bliss. They drowned themselves in their own wealth though they didn't care much for that. What really had matters was love that kept their family very close-knit along with the jubilant life that they chose to live, even when life became worse. To any onlooker, the way the family looked and carried themselves was an example to how a family should be.

The twins had a bond that couldn’t get any vigorously stronger even if they both wanted it to. They would do everything together, nothing could get in the way of their bond. Maybe it was the fact that they were built in best friends once born or maybe it was just because they just understood each other like no other regular person could, regardless of the cause, their relationship held up greatly for many years. Like glue, the two never seemed to be disunited from each other. Anastasia couldn't imagine hanging out with anyone else and nor could Conner.

Once becoming of age to attend Hogwarts, Anastasia realised that she couldn't always be as close as she was to Conner. Change was inevitable. People wanted to hang out with her and so she forgot all about Conner while at Hogwarts. Not only that but she was absolutely tired of the closeness of her family. It made her feel fake to smile all the time and be friends with only Conner because no one else liked him. Conner surmised their bond would still be as “together” as it were at home. “Nothing could tear us, it doesn’t matter what happens. We’ll always be best friends,” was a rudimentary conception of what Conner was thinking on the whole journey there. After her sorting ceremony, she was joyful at the fact that she didn’t end up in (insert house here) with Conner. He was clingy and couldn't seem to get a new start at Hogwarts without his twin sister. As Anastasia ventured further into the world of Hogwarts, she soon began to hang out with a troublemaking group of people and continued to get in trouble and break the rules. This began to tarnish the Delacroix name as she became more rebellious as time went on. No one compared the two anymore. They separated into two different people as although Anastasia was selfish, calculated and charismatic, Conner was good-hearted, timid and wasn't sure of what who he was and what he wanted to do in life. Characterized as a social butterfly, it was hard for Anastasia to find someone she couldn’t charm with her witty humour and too-free-to-care attitude.

A bit competitive when it came to Qudditch or rather almost anything ( Aside from her studies to be specific ), she loved the thrill of the sport and got excited at the idea of it. Although she never really had the idea for a career out of it, Quidditch was a fantastic hobby for her, one that she cherished most. A bit too pumped up with excitement with it came to the game, she was the example of that one person at a baseball/amereican football game yelling out at the players to stop being incoherently imbecilic and to do what was supposed to be done. It was an eccentric fact about her that she didn’t seem to give much care about despite people’s glares and exasperated tones. Aside from that, she couldn’t help but fit in with every crowd: it just came easy to her. A gal like her had a smile that couldn’t be beat, it was rare to see her with one after coming to Hogwarts. Instead, a classic smirk became her signature thing or nothing at all. Anastasia is determined, she wasn’t someone who gave up quick when things got down. Persistent yes, but it got the job done when it needed to be done. She enjoyed the chase much more than she enjoyed the actual victory at the end.

3) Write about your character's appearance. What do they look like? Are you planning on using a certain model for your character? If you already have a picture in mind, you can put it here! 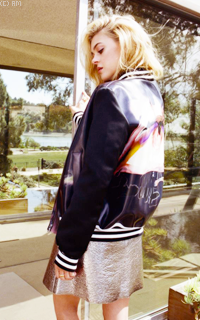 4) Is your character a Pure-Blood, Half-Blood or Muggle-Born? Do you have any notable magical relations? (Remember, you cannot be related to important Harry Potter characters!)

6) What year is your character in?

Out of Character Questions (These do not affect which House you'll be sorted into. Everyone must answer!)

1) How much time will you have to participate on this RP site? (This does not affect which House you'll be sorted into).

C) I should be able to participate at least some every day.

2) Is this your first character?

A) This is my first character.

B) No, this is not my first character.

3) If your answer to the previous question is B, how many characters do you have? How many of them are "exotic" (of a different magical race/have a special ability)?

Technically this is my third character though I got two of my first characters (Marilyn Charter and Leighton Delacroix) deleted only because I'd like a fresh start on this wikia and I didn't exactly like the way I had written those characters!

Retrieved from "https://dumbledoresarmyroleplay.fandom.com/wiki/Forum:Anastasia_Delacroix?oldid=808743"
Community content is available under CC-BY-SA unless otherwise noted.