Start a Wiki
Forum: Index > Sorting > Anastasia Harlow
Note: This topic has been unedited for 614 days. It is considered archived - the discussion is over. Do not add to unless it really needs a response.

but, dear me, let us be elegant or die.
The Sorting Quiz

A. Select the option that best fits your character. (Remember, this part is a requirement for every character you make! Please italicize the answer.)

1. What are you looking forward to learning at Hogwarts the most?

3. If flowers adapted their scent to attract the unwary, what would it smell of in order to lure you in?

5. Four boxes are placed before you. Which one do you open?

A. The ornate one, promising secret knowledge and unbearable temptation

B. The small, tortoiseshell box, embellished in gold, with a small, squeaking creature

:C. The small, pewter box that reads "I only open for the worthy"

7. What road tempts you the most?

:A. The cobbled street lined with ancient buildings

B. The wide, sunny, grassy lane

9. What scares you most?

A. Speaking in such a silly voice, people will laugh at you and mock you

B. Waking up and realizing your family & friends don't know you

:C. An eye at the keyhole of the dark, windowless room where you're locked

D. Standing on top of something high, without anything to stop you from falling

10. It's late, you're walking alone, and hear a peculiar cry you believe has a magical source. What do you do?

A. Wait for developments, while mentally reviewing the most appropriate spells

:B. Draw your wand & stand your ground

C. Draw your wand & search for the source

D. Proceed with caution, keep a hand on the concealed wand, and keep an eye out

1) Give a description of your character's personality. It must be at least two paragraphs long, seven sentences each.

Being a Wampus at Ilvermorny, it clearly helps show who Anastasia is. A warrior. She'll never back down. It's not competitiveness, it's a part inside that needs to protect. Protect herself and protect others. It's surfaced even more after her parents died or were jailed. She couldn't do anything about it to protect them. That's also a thing about her. She always feels like she needs to help. Do something and make a change. Even if it doesn't have to do with her, she wants to help. Small issues, large issues, and everything in between, it's always been important for the girl to help and stand up for what's right. Stand up for what she believes in.

Her falcon patronus and animagus also has a lot to say about Anastasia. She's quiet but observant. Her eyes always seemed to observe, really. She likes taking in all her surroundings and note anything important for later. Could she be a good detective? Hell yeah she could. She's also quick. With her quietness also being in play, she could sneak up on anybody in a heartbeat. She's good at staying unnoticed, except for, of course, when she wants to be noticed. She knows how to be sneaky. How to stay out of the eye of trouble. She isn't going to be wound up caught like her parents were.

Although silence is Anastasia's favorite trait, when she isn't so quiet, she's fierce. Loud. Someone you want to back away from. She doesn't care about any person, any status, any wealth, or anything else. If she's mad - which is the usual feeling she is when also choosing to speak up - she'll tear you apart inside and out. That's another thing. Anastasia doesn't care. If you had to be afraid of someone that if you piss them off they'll kill you, it might as well be Anastasia. Has she killed someone before? No, thank god. Though, in a long lifespan and more years to come, it's not out of the picture...

2) Write about the history of your character. How did they grow up? Is there an incident that made them the way they are? It must be at least three paragraphs long, seven sentences each.

Anastasia Harlow is what some may call an accident child. Don't mistake this for an unwanted child. She wasn't not wanted. She just wasn't expected. Her parents - Ilvermorny graduates known as Bianca Trent and Jonathan Harlow - were both young and hadn't been dating for a long time at all. They didn't even think they wanted to get married. (They did in time. Not because they felt forced to with an unexpected child at all. In fact, they didn't even finally get married until five years later.) There was also the fact that both of them had done and still did risky jobs for risky people. Dark wizards, gangs, and pretty much anyone else who may not want to be found by aurors or the police. So, it's definitely clear that any child they of theirs would never be very safe with all the work they've done, but the child still wasn't unwanted. Anastasia was born and her parents loved her all the same as any other parent may.

Busy is a big word in Anastasia's dictionary. Busy, as in the word her grandmother always used to describe her granddaughter's parents when they had to leave and they shipped their daughter off to Bianca's muggle mother. Angry would also be found in the same dictionary. Used as in what Anastasia felt when her parents left. No, she wasn't mad at her grandmother. In fact, her grandmother was her favorite person in the whole world. She was mad at her parents. For leaving her. Putting some risky work that Anastasia wasn't even allowed to ask about in above her. The more time passed, the more busy they were. They even missed their seven year old's first sign of magic. Anastasia had been in her grandmother's fancy living room when it happened. Playing and being wild - like a lot of seven year olds are - one small little trip ended up into a catastrophe. She fell back into her grandmother's favorite vase she owned, leading it to fall and shatter. Luckily enough, by the time her (muggle) grandmother had made her way downstairs to see what had happened, it had been magically fixed to look even better than before. Although magic was both known by the two of them, it still was quite the confusing incident with little knowledge. Anastasia didn't fully understand until her parents gave her a small lesson on it.

Likewise, An Ilvermorny letter was sent to Anastasia when she was eleven and off she went. She was excited to go. See what her parents once saw. Become the same to what her parents were. Well, the wizard and witch part of them. It was quite a prideful moment when being sorted into Wampus. It was the house of her father, but more importantly, the house of warriors. Anastasia had never really thought of herself as a warrior but, damn, she'll take it. Overall, her years of Ilvermorny were pretty splendid. She had friends. She did well in class. She had a gift with magic similar to her mother. Hey, she even worked and accomplished becoming an animagus in her fifth year. It was normal. Good. Easy. Things didn't stay easy. Easy was gone by the time Anastasia reached her sixth year. Summer before, actually. Anastasia wouldn't attend her sixth year at Ilvermorny.

Like she had spent most of her summer, the sixteen year old was with her grandmother. The day was normal. When Anastasia's grandmother welcomed inside two aurors that had knocked, she was washing the dishes. No idea at all what news they would share. Oblivious to the aurors, she wouldn't even hear the knews until her grandmother shared it to her right after. Turns out, Anastasia's parents had been caught doing something bad. Really, really bad. They were with a few dark wizards and such when the aurors found them. A fight broke out causing the death of a few lives - including Anastasia's mother - while the criminals who survived were put in Azkaban. No matter how much the news may be told or how long from the incident it was, Anastasia will always be shocked. They were gone just like that.

With all the struggle and pain dealing inside of Anastasia, both her and her grandmother decided it may be best to not attend Ilvermorny for at least a year. Anastasia didn't want to look at magic for a very long time. So, she took a breather. Lived with her grandmother and rested. The closest thing she did or saw that related to magic was her animagus, but that was a must. A thought of Ilvermorny didn't even cross her mind. Really, it wouldn't ever again. It was exactly a year later when Anastasia's grandmother proposed for the two to move away. A different country. To start new and fresh. Why not? Anastasia couldn't think of a reason. So, the two packed up their bags and ultimately chose to move to England. Since she skipped it in Ilvermorny, Anastasia will start her sixth year at Hogwarts in hopes for something new. A refresh. 3) Write about your character's appearance. What do they look like? Are you planning on using a certain model for your character? If you already have a picture in mind, you can put it here! 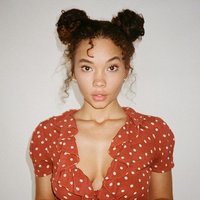 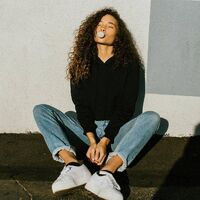 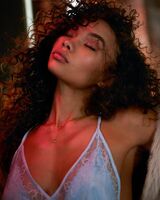 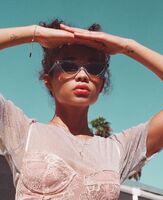 4) Is your character a Pure-Blood, Half-Blood or Muggle-Born? Do you have any notable magical relations? (Remember, you cannot be related to important characters from the Harry Potter Universe!)

6) What year is your character in?

7) The Sorting Hat has been known to take house preference into consideration. If your character could select one house they believe they are best suited for, what would it be and why?

Really, Anastasia doesn't care. She hadn't done enough research on Hogwarts houses to care. Though, she knows enough that any except Hufflepuff would be cool.

B. Whilst the first two questions will not affect the character's house (and are mandatory), the others are designed specifically to help users come up with their character's ideal job (and are optional).

:B. No, this is not my first character.

2) If your answer to the previous question is B, how many characters do you have? How many of them are "exotic"?

3) What would people who know your character well say they're really good at?

5) Aside from family and peers, what motivates your character the most in life? What drives their passion?

6) Where does your character's weaknesses lie?

7) Wand cores and woods speak volumes about a person's character. What is your character's wand? Why does it answer to them?

Retrieved from "https://dumbledoresarmyroleplay.fandom.com/wiki/Forum:Anastasia_Harlow?oldid=1001667"
Community content is available under CC-BY-SA unless otherwise noted.