1) Give a description of your character's personality. It must be at least two paragraphs long, seven sentences each.

Astrid is, to say the very least, a dreamer. She's the type you'd find not paying attention often unless she's truly interested. The things that are interesting to her others could find to be rather crazy because she is the believer type. Not the kind you's associate with faith, but more so with believing anything is real. She would even go as far to say that alternate dimensions and timelines exist, because there is no proof to back up that their isn't and she would use what little evidence that their is to back up her beliefs. With this being said, she isn't the type to discredit anyone for what they believe, because that just isn't the type of person she is. She was brought up to be very respectful of what others thing or say and he belief will always remain solid no matter how wrong she may think another person is.

A little accident prone at times, Astrid can sometimes be referred to as accident prone. This is due to the fact that she doesn't much pay attention to her surroundings and to other people. Her tripping and falling would have her laughing if ever it were pointed out with her saying something along the lines of: the floor just wanted to give me a hug. She isn't the type of girl to follow any path that another woult willingly laid out for her and prefers to follow her own ways, even if it could cause her some trouble later on. It could also be said that she's a very independent woman. This is sometjing she has always strived to be and it won't ever change for her, because she isn't the type to lean on others. With all that being said she always makes a point that others know that her her temper is nonexistent and that she has never really been offended by others.

2) Write about the history of your character. How did they grow up? Is there an incident that made them the way they are? It must be at least three paragraphs long, seven sentences each.

Astrid was born to a pair of pureblood parents in norther portugal. Her parents loved her dearly although they were mostly too busy to give her the attention that she needed whilist growing up. Due to this, they ended up hiring a nanny to take care of the little girl. This didn't cause any kind of disdan among the family, instead it just made her value the time she was able to have with her parents when they were actually home. With this being said, Astrid grew up with a lot of love causing her to turn into a kind hearted and thoughtful girl that her parents wanted her to be. Often times when were her parents weren't around Astrid would sneak books and other things from her parents study things that would eventually shape the way she thought. Many among those things were books on possible theories none of which had ever been proven and she had assumed that anything could be possible and everything is true until proven otherwise.

Whe she was 7, she had her first magical experince. It involved her attempting to hang up christmas lights and her falling off of the ladder and bouncing until she was safely settled on the floor. With that she told her parents who were delighted beyong belief because their daughter wasn't a squib, something they might of thought she was. When she was 11 she recieved a letter from various wizarding schools and deciding to go to hogwarts after hearing stories of its reputation. She was sorted into Ravenclaw in her first year. In all honesty, her schooling years were pretty uneventful as she mostly kept to herself and her studies. Mostly due to the fact that others were known to tease her sometimes for the way she thought, but she really didn't care or say anything back as to not feed into it.

When she finally graduated, she headed back to portugal and applied for a job at the ministry per her fathers request. The job she got had her working at a desk, a job she wasn't happy with. This went on for about 4 years before she finally had enough and quit her job. She just couldn't take dealing with sitting behind a desk for the rest of her life and explained that to her father who happened to be very disappointed. After explaining everything she told him that she planned to move to britain and get a job somewhere she vould apply her thoughts. It took her a month before the plans to leave came into fruition and she was finally able to go on her own and do her own thing. This would include getting her own place and possibly applying to the ministry.

3) Write about your character's appearance. What do they look like? Are you planning on using a certain model for your character? If you already have a picture in mind, you can put it here! Luna from f(x) 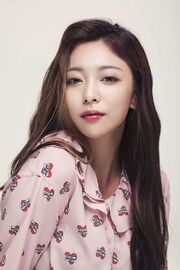 4) Is your character a Pure-Blood, Half-Blood or Muggle-Born? Do you have any notable magical relations? (Remember, you cannot be related to important characters from the Harry Potter Universe!)

She'll eventually work in the department of mysterious i hope.

A. Select the option that best fits your character. (Remember, this part is optional for adult characters!)

1. What are you looking forward to learning at Hogwarts the most?

3. If flowers adapted their scent to attract the unwary, what would it smell of in order to lure you in?

5. Four boxes are placed before you. Which one do you open?

A. The ornate one, promising secret knowledge and unbearable temptation

B. The small, pewter box that reads "I only open for the worthy"

D. The small, tortoiseshell box, embellished in gold, with a small, squeaking creature

7. What road tempts you the most?

A. The cobbled street lined with ancient buildings

B. The narrow, dark, lantern-lit alley

9. What scares you most?

A. Speaking in such a silly voice, people will laugh at you and mock you

B. An eye at the keyhole of the dark, windowless room where you're locked

C. Standing on top of something high, without anything to stop you from falling

D. Waking up and realizing your family & friends don't know you

10. It's late, you're walking alone, and hear a peculiar cry you believe has a magical source. What do you do?

A. Draw your wand & search for the source

B. Proceed with caution, keep a hand on the concealed wand, and keep an eye out

D. Wait for developments, while mentally reviewing the most appropriate spells

B. Whilst the first two questions will not affect the character's house (and are mandatory), the others are designed specifically to help users come up with their character's ideal job (and are optional).

:B. No, this is not my first character.

2) If your answer to the previous question is B, how many characters do you have? How many of them are "exotic"?

3) What would people who know your character well say they're really good at?

5) Aside from family and peers, what motivates your character the most in life? What drives their passion?

6) Where does your character's weaknesses lie?

7) Wand cores and woods speak volumes about a person's character. What is your character's wand? Why does it answer to them?