Get back up  off that dream  -Manolo 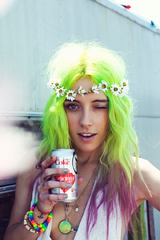 1) Give a history of your character. History must be at least two paragraphs long. How did they grow up? Is there an incident that made them the way they are? etc.

Audrey was born into a rich, pure-blooded family. She was raised lavishly, although as the years progressed, her family grew more and more disdain for her. See, Audrey had produced no magical results. After a while, the family assumed the worst; she was a squib. In order to get rid of this disgrace, they sent her away, leaving her to live with another squib they knew, offering the squib lots of money to raise her and take care of her. The squib, Angela Reese, had been in a financial situation, so gladly took the money and the child. Audrey, about ten at the time, grew to abhor her family and Angela. At her ordinary secondary school, she started off stuck up, making few friends. Later, she met the right kind of people, and slowly she became less of a former-rich-stuck-up, to a bit of a hipster, joining more of the alternative crowd. By then, she'd become much more comfortable with muggles. Around this time, she found some happiness, despite beginning to fail in school.

When Audrey was 17, she dropped out of school and moved in with her friends Rick, Taylor, and Yasmine. She started working at the grocery store nearby. For a time they were all right, until Yasmine and Rick started dating. Before this, Audrey and Rick had been romantically involved, so it was no surprise when a few months into the relationship, Rick and Audrey became romantically involved again. When Yasmine found out, she threw a fit, and she and Rick nearly split. At the end of the day, everything was patched up by making Audrey the scapegoat, and kicking her out of the home. At only 21, she had nowhere to go. Her income wasn't enough to own a place. Angela, having been an older lady, had died a few months back. As a last resort, she contacted her original family for help. Even if they were disgusted by her, there was more disgust to having someone who bears their name live on the street. Her father, having contacts in the ministry, knew of a boy with magic capability living in with a rich muggle family. He gave Audrey a letter of recommendation, giving her a good chance of getting in as a nanny there. Despite her outlandish looks, her pedigree allowed for her to become the nanny of the boy. When the family found out he was a wizard, it was a double win for them since she knew of the wizarding world despite not really being a part of it. She is now 22.

2) Give a description of your character's personality. Personality must be at least one paragraph long. Are you noble or sneaky? Arrogant or humble?

She is easy going, carefree, and very self centered. Anything she does will generally be for her, and she puts her own priorities above those of others. Audrey easily gets bored with conversations unless they involve her. She loves gum, smoking, and flirting. Her upbringing has made her somewhat snobbish, despite later in life being snubbed by the same people who taught her to be snobby. Audrey finds her family irritable at best, and generally tries to avoid them and the embarrassment of being the family squib.

3) Are you Pure-Blood, Half-Blood or Muggle-Born? Do you have any notable magical relations? (Remember, you cannot be related to important Harry Potter characters!) Pure-Blood

4) Does your character have any special magical abilities? Or special abilities in general (photographic memory, etc.)? Is he or she of a different magical race, such as veela, vampire, werewolf or the likes? Part or half of that magical race counts! (Remember, you cannot have an "exotic" characters as your first two characters!)

She is a squib.

6) Describe your character's marital status. Is your character single or married? What is the spouse's name? Any kids? She is a single pringle

OPTIONAL: If you want your character Sorted into a House, then please fill out this section as well.
Please Bold Your Choices

:A) I have a lot of other responsibilities, and although I really want to be a part of this wiki, there may be days on end I won't be able to participate in anything.

C) I should be able to participate at least some every day.

3. If your answer to the previous question is B, how many characters do you have? How many of them are "exotic"?

One, but he is not exotic.

4. Please post your time zone in relation with the UTC time zone (ex. Eastern Standard Time is -4), but if you don't understand how to calculate that then please simply put the name of your time zone below.