It all started with a cup of hot chocolate and a cold December.

Lisa Matthews was a Witch. She had graduated from the Salem Witches' Institute. She was determined to be able to live in both worlds. Which soon lead her to her one year away from getting her Musical Education degree.

Henry Richards was just a normal joe. He would go to work, school and home every. Single. Day. He wanted change. That soon came at a café.

It was cold and she didn't have any other classes that day, so she went to the local café to order some hot chocolate. Once she got her drink she turned around-

And spilled the drink all over the person behind her!

She apologized over and over as she hastily started to clean up her mess. She looked up and their eyes met. After the incident, they hung out a few times before they actually became an item. A year later, they were engaged and six months later, they were finally husband and wife. Soon after, they became parents. Lisa would soon learn a secret that Henry hid so well, even HE didn't know it.

He was verbally abusive.

How did Lisa find out? Well, it goes like this:

Whenever the kids would do something wrong, he would yell at them and say things that would bring their moral down. He would even do it to his wife. Lisa only stays with him because she loves him and knows he can be better.

Harriet Mallory Richards was born on February 6, 2013, two months premature. She's the middle child of the family, if you pretend the twins are one person. But they aren't, so technically she isn't. Harriet was named for both Harriet Tubman, and for Harriet the Spy. Maybe her mother was trying to tell her something from birth... get out while you can? And... spy while you do it? Whatever the reasons... Harriet was a big name for such a small girl. Mallory was easier to say... Mal was a convenient nickname, and so it stuck. The only time Mal gets called Harriet is by her father, who couldn't give a damn about what name she prefers, or when she's in trouble with her Mom.

Mallory did a few school projects in Muggle school in America, and she learned of her namesake. She sort of felt like maybe... Harriet wasn't such a bad name. But by the time kids are nine, they aren't really in the business of changing their name, no matter how much they might want to. Besides, on some level, it felt like she was giving into her Dad, and that was the last thing she wanted to do.

Harriet's Mal's first signs of magic came when she turned eight. She'd blown the candles out on her birthday cake.... caught sight of her Dad verbally berating her Mom. Mal got angry, and the candles relit. She knew she'd be headed for Salem, and wasn't surprised when she got her letter when she turned eleven.

Just before the start of her third year, Henry got a job in England. Mal was secretly way more scared to move across an entire ocean than she let on... but she knew she'd have her siblings there to help. And school was always a safer place than home, anyway. Besides, she'd only spent two years at the old school, right? What could be so bad about a new one?

Mal is fairly quiet before you get to know her. After suffering years of emotional abuse from her Dad... she's learned to put up walls. That doesn't mean she enjoys it though, and they usually come down pretty quick. She's actually an extrovert at heart-- she loves being around people, and loves laughing with people. She hates what her Dad has done to her. She hates that she feels the need to protect herself.
Her trust isn't easily won, nor is it hard to win, either. She's a good judge of character. She's also extremely frightened of boys, and the idea of being in a relationship terrifies her. Her Dad can't have started out awful, right? So... who's to say that anyone in a romantic relationship is who they say they are? 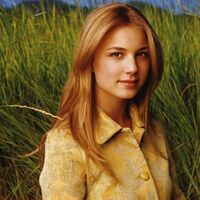 Mal is pretty small for her age. She was two months premature, and never really made up for it. She's quite short, and rather petite. She loves dressing in girly clothes, and she hates getting dirty. She has long blond hair, and big expressive brown eyes. Her face claim is Emily VanCamp.

*Her MBTI is: ENFJ

*She has moderate androphobia (fear of men).
Retrieved from "https://dumbledoresarmyroleplay.fandom.com/wiki/Harriet_Bagman?oldid=1063061"
Community content is available under CC-BY-SA unless otherwise noted.