Jace is a ball of fire. His temper can often let loose at the smallest of slights against him. He can be a bit snappish, however, especially when he finds himself in a bad mood and can often brush people off, regardless of how close they are with him. Jace is also a bit of a sheep, going along with the plans of those around him rather than taking leadership and think for himself. He can also be a bit oblivious to the world around him and is often slow to pick up on clues and subtle hints, for this some people think he's bit of an airhead and a bit of an idiot, but secretly, Jace is actually quite smart, academically at least. He doesn't really show it and doesn't study in front of people, in fact, he's found studying at three in the morning. Being an insomniac, sleep isn't his biggest strength and uses the unwanted time for school. However, this causes him to often fall asleep in times where he needs to be awake.

Not known to most people, though, Jace has a green thumb and loves herbology and anything garden related. When he was a child, he use to keep up his own garden, with the help of other people, and tried to keep the hobby up as he grew older but circumstances caused him to restrict this to the class. However, he can be found wandering through gardens and parks for the simple fact to survey the environment. For this, it could be argued Jace has a soft side hidden underneath the thuggish exterior that he put ons. Despite this, Jace is incredibly ambitious, wanting to gain a position somewhere in the ministry. He has multiple reasons for this but one is being that he wants to have someone represent the Serpents within the government. Though he's not sure if this will every blossom.

He does try to stick to a code, though this is the serpent's code, and is incredibly stubborn and never deviates from it. He believes strongly in the world he lives in and is proud to be apart of it. Though it can be difficult to gain his trust and loyalty, once he does give it, it often sticks. When this does happen, he can become very hospitable and gentle to them, especially if he believes they deserve or need his sympathy or aid. However, he struggles to show this side of him. Surprisingly, he's actually quite shy around anyone he's attracted to and often prefers to stay away and avoid someone when he realises his attraction towards them.

Jonathan was born to Kim Aejung and Robert Blackstone. They had met five years before in their final year at Hogwarts and married the year after they left. Originally, they were going to live their lives in England but Robert, being a member of the serpents, was caught smuggling drugs. It was meant to be an easy mission but Robert was thrown under the bus. Though the leader at the time, Artemisia, never confessed to it, she had found out he was leaking information for money and, instead of outing him, made him take the fall for a drug bust that she knew the officials were closing down on them. Robert took his wife and disappeared deep into Italy, leaving behind both the Wizard world and the serpents. He hid as a muggle somewhere in the Amalfi coast and a couple of years later, Aejung discovered she was pregnant. However, she had a list of complications throughout her pregnancy which eventually lead to her dying in her 8th month, making Jace premature. For the first six months of Jace's life, he was kept in a hospital with only 30% chance of survival. Luckily for Jace, he managed to be on of the lucky ones and left the hospital just before his seventh month.

He was raised as a muggle but was well aware of the magical world. His father had turned to drink and was rarely home. In fact, for most of Jace's life, his father was indifferent to him and his existence. He was either working down at the local fish market or at the bar. Jace grew up around the muggles around him, often spending his days running around with the other children. Being the only Asian that they'd seen, Jace was often a marvel to the other people and often had to fight to be involved. But, being kids, he forced himself to fit in and soon became somewhat popular. However, by his tenth year, he found his father becoming more and more erratic, especially when he came home, so he tried to spend as much time outside of his house as he could. However, he had his first instance of magic. His father had begun to drink at home and was growing more erratic and unpredictable as the night went on. Jace couldn't sleep when his father began to yell out in a mixture of English and Italian, even throwing out what seemed like Korean, though Jace had no knowledge of the language. He began to get more violent, storming into Jace's room, stumbling around and breaking Jace's belongings, eventually making his way to Jace. Out of fear, Jace's triggered his magic to have him be teleported out of the house. Having his father been to drunk to register it, Jace wasn't sure what had happened but he didn't question it, nor could he question his father as Jace knew he was too drunk to remember the event.

There was one thing that Jace's father did for him, though, when he was sober enough to do it. It was to teach Jace how to fight. Not through magic but through hand to hand fighting, martial arts, and other forms of fighting. It was also through the abundance of free time did Jace begin to learn gardening, learning from an elderly neighbour of his. For a while, his life was somewhat happy, he avoided his father when drunk and spent most of his time with friends or in his vegetable patch. It changed when he was ten, though, on the verge of turning eleven and being sent to Hogwarts. His father had begun to sink into a deep level of depression when Jace got his Hogwarts letter, having believed Jace was a squib since Jace never displayed any outward signs of being magical, and a few weeks before Jace was meant to be sent to the school, he hung himself from the ceiling with Jace finding him the next morning.

The officials, not having any family for Jace to go to, let Jace be sent to Hogwarts and during the summer, he stayed in a scatter of orphanages and foster homes within London, though Jace never told anyone this. In fact, he created some story to tell other people about his family, about a father and a mother who loved him and adored him. He didn't fit in with the other children at Hogwarts, not making any real friends. Some might have described Jace in the first three years of his schooling life as depressed. He withdrew from his hobbies and the people around him, purposely losing contact with his childhood friends in the Amalfi coast, and kept to himself until he was fourteen, where he stumbled upon his father's old diaries. They were shoved into a few boxes of his father's possessions and hadn't really gone through them until now. Inside, he learnt of the truth. Who his father was, who his father was involved in. For a year, he ignored it, wanting nothing to do with the so called Serpents until he began to get curious. Some of the things his father said didn't match up. Such as why the gang turned their backs on him so easily if they advocated family and loyalty so much.

So he decided to go investigate.

During his time in London, he began to follow one of the serpents, the one who his father mentioned. Lilith Kingston. In hindsight, he knew he was caught from the moment he started but who was he to know that the woman was the leader? His father didn't mention it, really just referred to her in derogatory terms such as 'bitch' or 'whore'. Lilith let him tail her for a few hours before leading him to an isolated location. Believing he was a cop, she was willing to kill him until she realised he was just a kid. It didn't take long for Jace to crack and spilt on who his father was. Lilith was willing to just ditch him when she heard but she continued to question and pry information about him. She held a grudge against his father and would be very much happy to go track him down except...he was already dead. She did tell him the truth, though, deciding it would just be easier if he knew their side of the story first. Lilith feared that if she didn't, Jace would start coming back and she didn't want to hurt a fifteen year old kid because he was too stupid for his own good.

She let him go, warning him to not come near again. For a while, he listened but...he was becoming even more curious about the serpents. It became a sort of fantasy for him, dreaming up a life within the gang, following in his father's foot steps but with the intention to stay on that path instead of straying like his father did. It began to resemble a sort of...family, somewhere to belong. At the end of his fifth year, he went back, going to a place where he knew they hung out and demanded to see Lilith again. When he finally got to? He demanded to join, nearly begging to be given a chance and not be viewed in the same light that his father was objected to. Afterwards, Jace began to become involved in the gang, going through initiation. That year, he became prefect, much to his own surprise. During this year he began to go deeper into the gang before becoming injured during the mission. This threw him off his game and currently, Jace is unsure of his place in life, especially when someone close too him left.

Given [ Jonathan ]Gift from god Middle [ N/A ]N/A Surname [ Blackstone ]Blackstone is a trade name for a variety of abundant black stones with a satiny, moderate gloss polish and natural cream-to-brown inclusions. 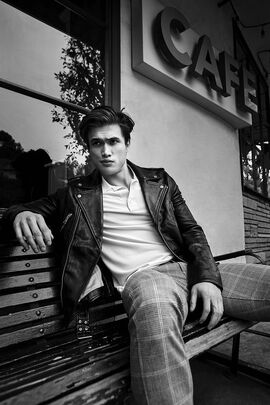 Retrieved from "https://dumbledoresarmyroleplay.fandom.com/wiki/Jonathan_Blackstone?oldid=1073922"
Community content is available under CC-BY-SA unless otherwise noted.