Jonathan Ash Prince was born April 9th, 2030. He is the second-born in his family with four siblings. His mother, Charity Prince, was a Healer at St. Mungo's who eventually left work after he was born to take care of her children. His father, Ash Prince, is a business man who's an apt herbologist, occasionally taking his time to teach the subject at school. Jonathan was born with an older sister, Aria, who had more than enough dominance for the two siblings. Jonathan learned from an early age that going along with Aria often worked out better than not, and he definitely looks to his older sister as a leader. Jonathan grew up around his Aunt Melinda, who lived with the family at Prince Castle. Aunt Melinda both taught him to be adventurous... but he also learned the value of caution from her as well. He feels she probably gets on better with Aria, and he's okay with that.

Shortly before Jonathan turned six, his younger brothers Jeremiah and Alexander were born. Jonathan was always curious about his brothers, and caring for them. That seemed to suit him more than chasing after Aria to play with her. Plus, they were boys-- when they were big enough, surely they'd be best friends. When Jonathan was seven, his first signs of magic appeared. Jeremiah had been crying -- without ceasing -- over some toy he couldn't reach. Frustrated by the tears and the noise (Jonathan's always been a rather quiet soul), he let out a loud noise of frustration of his own... but in the next moment his brother had the toy.

Jonathan had never known a life without Aria as the boss... until Aria headed off to Hogwarts. Things seemed to change a lot when she left. Suddenly he was the big leader now, and it was a role he shouldered carefully as he knew he had to transfer it back to his big sister whenever she came home on breaks. From what his parents, and Aria, have told him of school he'll likely be in Hufflepuff, which he's fine with. It was the House his parents were both in, and he's proud to carry on that tradition, since Aria was sorted into Gryffindor.

Jonathan is defined by quiet strength. He's seen it modeled over and over by his father, and by his Uncle Mark (and to some degree his Uncle Thomas, though Uncle Thomas isn't really that... quiet.) Though young, Jonathan understands and does his best to exhibit the qualities of a quiet leader. He defers to others in authority when the situation calls for it, but can rally a group together and be their leader when the time is right.

Jonathan is really good with people-- he can be the best listening ear, and isn't terrible with advice. However, he's very introverted. His large family can be quite overwhelming at times, and he can only handle so much of them before he needs to disappear into a book, or take a walk through the stables. Working with the horses is something he learned from Aunt Melinda, and he loves them. They're gentle creatures with big hearts... he definitely identifies with them and enjoys taking care of them in the same way that he enjoys taking care of his younger brothers and siblings. 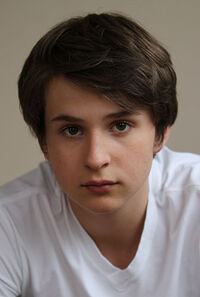 Jonathan dresses comfortably every day, but when the situation calls for something dressier, he isn't one to complain about it. He keeps his hair a little messy, and a little longer. He has an easy smile to compliment the soft gaze from his brown eyes. He's a little on the short side right now, but give him time. His face claim is Grayson Maxwell Gurnsey.

*Jonathan means: Jehovah has given

*His MBTI is:
Retrieved from "https://dumbledoresarmyroleplay.fandom.com/wiki/Jonathan_Prince?oldid=1062027"
Community content is available under CC-BY-SA unless otherwise noted.