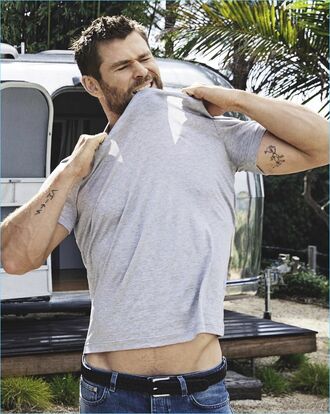 oey is your typical Australian bloke. Just wants to have a good time and surf. Pragmatic, easy going, and assertive, Joey is the type of person that isn't hard to get along with. In fact, he goes out of his way to make sure everyone feels welcome and comfortable around him. It's actually a bit of a problem because he finds himself highly stressed when he thinks someone doesn't like him. A people pleaser through and through, Joey rarely takes himself too seriously. A jokester, he's been known to pull off goofy acts to make everyone feel at ease. Well, half the time he pulls them to impress both the ladies and the gentleman. As nice of a guy that he is, Joey is a little bit of a f!ckboy. He's been known to hit up everyone and anyone, simply for a good time.

However, that isn't too say he's modest. No, quite the opposite–Joey tends to think he's the best person in the room and his ego is bigger than the planet. Whilst he's not stuck up and won't demand people pay him respect, he does often demonstrate a cocky attitude, especially when he himself finds himself comfortable around them. One can't be too sure, though, if this is done to make himself a comical relief sort of figure. Life is serious and he just wants to make the world a little bit better. And as they say, laughter is the best medicine. There was a reason Joey entered the media culture through becoming a comedian and a talk show host. His skills lie in comedy and interacting with people rather than acting. He did have a brief fling with musical theatre though. Joey is someone who has niche types of interests, especially in the magical world. His type of music is 70s-90s music, with a few '00s in there. But this is muggle music and he struggles to like magical music. 'Eye of the tiger' is his jam and he refuses to believe the fake news that it's a terrible song.

Joey is, at the end of the day, an Australian. He'll be known to use Australian slang, stay up late to watch Australian football, and refuse to let his heavy Australian accent merge with a British one. He's an active person. Joey loves sports–but muggle ones. He has no time for quidditch. Joey hates flying. But he loves the water. Joey could spend his life in the water. Surfing, specifically. It relaxes him. But Australian Football is also something he likes to play and actually owns a football signed by Kevin Bartlett, one of the greatest sportsman in history (in Joey's humble opinion). It's his prized possession. On other topics, Joey's also a health nut. He refuses to eat anything unhealthy and is constantly working out and keeping up to shape. Joey refuses to let his twin brother be stronger than him. He's also a hard worker, which surprises him. Even as laid back and easy going as he is, Joey wants to get a job done and hates when people are slackers. If he feels as if he's the only one contributing to something then he can get rather frustrated and be a little bit gruff. Joey, in short, is a teddy bear–even when he's angry. He'll just huff and puff.

Perhaps Heidi Redding and Sebastian King could have had a more idyllic love story. In spite of the off-putting events that led to them meeting and falling in love, Heidi and Sebastian did have something akin to a fairytale romance. They weren't the kind of duo you'd expect to fall in love - an Australian fashion designer and an English paleontologist - but they worked in ways even the universe couldn't begin to fathom. They were together for many years, but friends for longer. It was that way they knew they truly belonged together. On and off and on again, the perceived instability of their relationship only came to an end when they married. It was a grand event, with high profile citizens attending from Heidi's behalf, and a large collection of the all-time legendary scientists who collaborated with Sebastian in some of his biggest projects, that which propelled him to minute fame within his profession and inevitably sent him to Australia, where all these events transpired.

It was from their marriage that came several children. For the longest time, they yearned for a daughter; someone Heidi could confide with all the family secrets, the recipes for fashion, the ways of the Reddings - a family notoriously feminine. Instead of this, though, they had a wave of blue: Griffin was their first, three years after their marriage ceremony, and a year later was followed by twin brothers Joey and Michael King. It wasn't until years after their twin boys, in face of marital problems and a lot of issues to conceive another child, that they had their first daughter, whom they decided to name Lucy. For the time being, they were content with the family they had, but their wishes for another child - another girl - would inevitably make a prompt arrival. It just didn't happen until several years later, though these desires were sated quicker than the first time, taking the form of a tragedy: Heidi's sister, Addison, had passed away, taking her husband and two sons with her in that horrible car crash. Her daughter Freya was the only one to survive.

Only then did they realize they weren't at a point they could comfortably raise a baby. Freya was just four when she moved in with her godparents, too young to understand what was going on yet too old to fully fill that gap in Heidi and Sebastian's hearts. Whatever gap she didn't fill in their hearts, she certainly filled in their hands and their time. Freya was a firecracker, and it wasn't until they realized this that they decided they were better off as a family of 7 - Freya included, of course. It was at that point the paleontologist took a step back from his responsibilities to his career, as little as he liked the fact, and became much more hands-on - Heidi had always been the main source of income, however, so it wasn't like they struggled following his decision. The Kings had reached a point where all they wanted to do was restrengthen their familial bonds, so that's exactly what they did; sure, they ended up with two dogs and a cat, but it was all worth it. For the first time in what could be considered as ever, they felt content with the place they were in.

Joey was the youngest of the King twins and was probably the most...charismatic out of them all. Easily the most difficult to handle. He was loud and talkative and the quickest to descend into a tantrum. However, he was always fun to be around–especially when he got his way. He proved he was more than capable of maneuvering his way through life and was always the social butterfly no matter what scenario he entered. Sure, he might also be the most troublesome of the family and the most likely to break a rule but a minor matter, honestly. When he was seven years old, he had his first magical incident. He turned one of his teacher's clothes into a clown outfit because she was bothering him. Problem was–the teacher was a muggle and it took the involvement of the Australian ministry to push the incident under the rug.

When he was eleven, he followed his brother's too Hogwarts cause he wasn't going too leave them. No, they deserved to have him around to constantly annoy them. He was sorted into Gryffindor too no one's surprise. People almost considered him the reincarnation of the Weasley twins. However, it was evident that he and his twin brother, Michael, were not exactly as close as Fred and George were. Not that they weren't close. Just not joined at the hips. Joey eventually fashioned himself as a Jordan Lee sort of figure. Whilst his brother was a beater, he was the commentator. A blood good one at that, too. Some confessed they only came to the matches to hear him comment and crack jokes about the game in front of him. Academic wise he didn't care. He wasn't failing but he was never prioritizing it. No, entertaining the people was far more important. Joey was the most likeliest to interrupt classes. Through some prank or just through getting the teacher off topic–he did it. When Michael began to date Erin, Joey didn't put too much mind too it. Why would he? He had a few boyfriends by then and didn't think it would turn out the way it did. When he heard about the pregnancy, he did the only thing he could do–be there for his brother and his girlfriend.

He even followed Michael back to Australia when Erin died. Even though he'd been offered a few job offers to become a professional commentator for Quidditch and other positions. Joey turned them all down and went back too Australia, not wanting too leave Michael alone. Living with his grandparents, Joey worked odd jobs for the next few years, helping out his family as best he could. One of the places he worked was a crew member for a morning show at some Australian television studio. It was here that he got his first taste of television and it only snowballed from there. He got a gig as a weatherman for magical Australia and for a year or two worked there, reciting weather reports with a smile. Maybe it wasn't what he loved but he loved being in front of the camera. He certainly loved all the elderly woman telling him over email that he was their favourite part of their day. It wasn't until he was twenty one did he receive another offer. To start his own late night talk show in the UK. Someone from LBC wanted to rope him in. (Little did he know it was actually Alistair Fitzgerald who was impressed with his small segment). At first he wasn't going to do it but eventually he said yes. It was a great offer despite Joey being blind to the...actual reasonings that the future Minister of Magic had for wanting Joey to work for his company. So he moved back over too England(but still came back to Australia every British winter).

At first, his show was on a very late hour and struggled to get any important guests. It was all C-listers and he was lucky to hook a B-lister. However, Joey made the most of it and eventually caught the attention of the viewers. By twenty four, his show had jumped in popularity and was bumped up to a much better time. Fitzgerald was right in investing in Joey–he was popular with everyone and was generating the big bucks. This was where Joey stayed for the next few years. As a talk show host. However, he was also beginning to get to know the layouts of the business, slowly taking in how the studio worked. Some believed him to be an airhead, a goof, but he wasn't. No–Joey knew how to hustle. He knew how to bide his time and play his cards right. That, when there talks of Fitzgerald retiring from the studio, Joey was the firs to put his hand up as vice president. And why wouldn't he get it? He had networked and by the age of twenty six, he had proved he was more than capable of running it.

Retrieved from "https://dumbledoresarmyroleplay.fandom.com/wiki/Josiah_King?oldid=1064216"
Community content is available under CC-BY-SA unless otherwise noted.