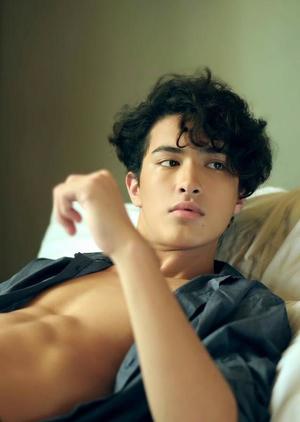 Konosuke is sweet in that he tries to be kind to most people, and dopey, because he has fragile optimism. He really wants to learn and meet people, and his openness about himself, bordering on narcissism, can pull people in easily, as well as his good looks. He's bad at reading people because, more often then not, he takes friendliness as a sign of someone being interested in him. This is generally the only requirement for him to fall for people, so he very easily falls for all kinds of people. The half blood is clingy, to say the least, and many of his relationships have ended because of this. It probably doesn't help that he's the opposite of "easily bored". Konosuke just thinks people are cool and just, seeing them do what they love can be really beautiful. Unlike a lot of dopey people like him, he actually goes after what he wants, and although he would probably do better poly, he tends to stick in monogamous relationships.

He's very bad at having friends, because inevitably he grows a crush on them and either ruins the relationship by dating them, or ruins it by making things awkward. In class, he really isn't that bright, and often times, despite his hard work at trying to understand, doesn't. Things that are more natural, like say divination, come easier to him than things that require precision and mental capacity, like potions. He's good at picking up nonacademics, mostly because when he falls for people, he falls for the things they enjoy too, so for him to take part in those activities, it feels almost sacred. Despite dating so many people, and losing hope time and time again, his loneliness propels him forward. He doesn't take criticism well, and he doesn't like it when people don't like him. His first reaction to those sort of things is just deep saddens, but later anger mixed with jealousy hits, and a less loving/more toxic version of himself appears. The kind that might label him as a crazy ex. He's never had a pet, but he's always wanted one, and he's soft for animals, even the scary ones.

Izumi never expected the term "trip of a lifetime" to be so literal. Her whole goal was to study abroad in Europe on one of her school's international campuses, come back, work her way up to DA of a major city. Meanwhile, Andreas was just a wizard in his late 20's, living the party life, traveling where he could while coming back home to make sure his parents knew he hadn't died. On one fateful trip back to Gibraltar, he stumbled across Izumi, and was struck with the arrow of love. By all means, they never should have met, but sometimes a simple conversation over Papayas in a market is enough. They continued to meet each other, and Andreas opened up Izumi's eyes to the true world of possiblity. She didn't just fall in love with Andreas; she fell in love with magic. They got married within a year and soon after they had their first and only child, Konosuke. The disillusionment only really set in by the time he was two, way past when she had dropped out of school and turned her dreams into taking care of her son. Izumi had changed completely for the sake of her family and her child, but Andreas had continued to party and live the wild life. She could only give so much, even if he continued to take from her. Izumi finally had the strength to get out and walk out- at the cost of her son. They battled in court over who should take care of the two-turning-three year old, and the wizarding court ruled that it would be to Konosuke's benefit to live with the wizarding parent, so he could have more exposure to that world. Izumi had visitation rights, but was now closed off from the magical world she loved so much.

Andreas had a rotating door of women, and Konosuke had more "moms" than he had age by the time he was seven. Sometimes they would exist at the same time, sometimes they would stick around for years, being the only "mom" figure. One thing he knew for sure was that none of them were meant to last. Konosuke treasured his time with his mom, but she was busy growing herself into the women she thought she would be before Andreas distracted her. Izumi also didn't buy him all the things he wanted like Andreas did, and she actually made him do his muggle primary school homework. The great thing about Andreas is that when primary school became too boring and tedious, he let Konosuke drop out. "We're wizards," he said. "We don't play by muggle rules." The same year when he was 8, his first sign of magic came out when he apparated to see his dad after not seeing him for two days, only to end up on a boat in the Mediterranean with his newest "mom". Andreas promptly took him back home.

Konosuke spent the rest of his childhood playing video games, pranking his nanny until Andreas stopped hiring people to look after him, and learning to take care of himself. The house was stocked up with unfriendly children food like fire-whiskey, so that's what he had when dad was gone. It didn't do much besides earn him a beating for drinking up his expensive liquor. There was a another guy in his neighborhood though, about his age, and through him he met and made friends. It was always really lonely at home so he did his best to come to sleep overs. Anytime any of his friends parents started questioning about his dad too much, his dad would just obliviate them and he'd have to start over again and rebuild friendships. The guy he met ended up being his first boyfriend, and much like his dad, his pursuit for "the one" just sparked from there.

Tangentially, he saw less and less of his mother. Whenever she'd come see him, his dad would inevitably get back to his old tricks and try to woo her back. Part of him beleived this whole "new mom" fad was really just a way to get her back. She stopped visiting him all together when he was ten, after she shared with him that she had a new, muggle family, and that because of the magical split, it would be best if Andreas and Konosuke stayed in their world, and she and her new husband and child in their own.

Even though muggle country wise, Konosuke lived in british territory, geographically, he lived closer to Beauxbaton. Thus his schooling began in the french influenced school. He was at an advantage due to hitting puberty early, and many of the students already thought he was cute. It wasn't hard to get into relationships, and at some point even felt harder to deny them. The half blood used this as an opportunity to distance himself from his dad, who had done that all his life. Why would he need anything from him when he has his network at Beauxbaton? Many of his exes served as counselors for him, and when they weren't emotionally good at handling his narcissism, they would help in other ways, such as homework. Unsurprisingly for a kid introduced to alcohol young and without much formal education stimulating his learning early on, schooling came as a challenge. He never specifically set out to date people who would do his homework, but it was probably something he implicitly did anyways.

Bouncing from relationship to relationship made it hard to figure out what he liked and who he was. One minute he was learning guitar with his girlfriend. The next he was becoming the next child prodigy with his datemate. It ended up with him becoming a jack of trades, master of none. He's vaguely good at canoeing, ice skating, chess, guitar, wizard chess, shopping, collecting chocolate frogs. By proxy, he also picked up quite a few languages conversationally. Eventually, the school grew tired of him and labeled him a manwhore, even though he never actually cheated on anyone he dated. He was unused to the bullying and wanted to leave at the first sign of trouble, figuring he had lost everyone and was alone again. This is why he decided it would be best to transfer to Hogwarts, for a fresh start, and perhaps a new shot at romance.

Retrieved from "https://dumbledoresarmyroleplay.fandom.com/wiki/K%C5%8Dnosuke_Fuchs?oldid=1041230"
Community content is available under CC-BY-SA unless otherwise noted.