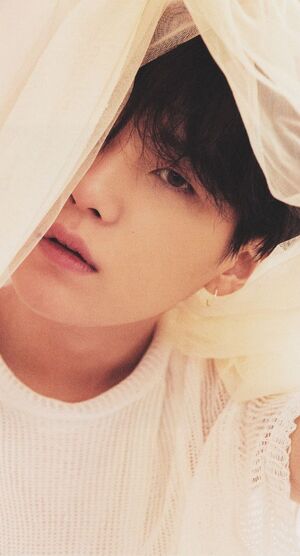 Daejeon is the sweetest boy you'll ever meet, and he's almost too sweet that he might give you a cavity if you're around him too long. His parents made sure that he was properly taught and brought up in safety and security, and that made him who he is today.

Unlike his brothers, Daejeon doesn't have a bad streak or a reckless personality. His parents somehow made sure that he didn't get mixed in with the wrong crowd, and so Daejeon stayed by himself which grew his love for art and books. He also loves pottery and doing things with his hands, since it doesn't usually involve having to talk to people.

Daejeon is a very sensitive person who doesn't take easily to insults or contention and will usually cry or shrink into himself if he's attacked or bullied. He can't handle discontention and will break whenever he's around it. It's almost like he's too soft for the world, and he needs to just stay to himself.

Despite his sensitive nature he's a very smart kid who picks up on things easily and can learn almost anything, but he's so shy that he doesn't put forth much effort. He usually does things in the background or sidelines, and doesn't like taking credit for anything.

Daejeon tries to be like everyone else, but it usually doesn't work or turns out badly. He's learned to stay away from people and keep to his drawings and plants, and he has hopes of becoming an Herbologist so he can stay secluded and away from others.

The Kang Clan is a family of very wealthy South Koreans that acquired their money though questionable means. No one knows how they came to their wealth, but no one bothers to question the powerful tycoons. It's still a mystery, but most believe the family makes up its own mob. Kang Taejong, one of the younger Kangs, took a different route with his money and set up a successful clubbing chain, Seesaw Clubs. It was at one of these clubs that he met Anastasia Maverick, sister to the CEO Arlon Maverick of the infamous Euphoria Corporation. She was not wealthy like her brother, but her personality more than made up for it. The spunky girl from America stole his heart and soon became part of the Kang Clan herself.

A few years down the road, Anastasia became pregnant with triplet boys. Wanting to commemorate all the cities where she and Taejong had their first milestones (first date, first kiss, and engagement), she named the three boys Daegu, Seoul, and Daejeon. The trio grew up inseparable. They did everything together. They still fought and argued of course, but they'd also kill anyone who dared do the same to one of them.

Daejeon was a good kid from the start and remained that way throughout his childhood. While his brothers were off mixing with the wrong crowd, Daejeon was home practicing flute or working on his art. He didn't make friends easily because he got hurt too much because of his emotions, and he was too scared to do things with his brothers because he didn't want to get hurt or have them get mad at him.

Of course that meant that he was secluded and alone most of the time, which he didn't mind because he grew used to it. His parents sent him to school to try and have him socialize, and while it helped it only made him want to be home more. He joined a small group of performers because of his flute skills, and made a few close friends there.

When he was 7 his first sign of magic appeared when he was fighting with his brothers. He was so sad and hurt that he was crying so loudly, and in his sadness he made all the windows shatter to get them to stop. He was surprised as were his parents, but they were glad that he had magical abilities.

When he received news that he would be going to Hogwarts he was quite nervous, but his parents told him that him and his brothers would be together and they'd be fine. He's been doing well in Hogwarts so far, and he's mostly trying to survive and get through school.

WIP
Add a photo to this gallery
Retrieved from "https://dumbledoresarmyroleplay.fandom.com/wiki/Kang_Daejeon?oldid=1074718"
Community content is available under CC-BY-SA unless otherwise noted.